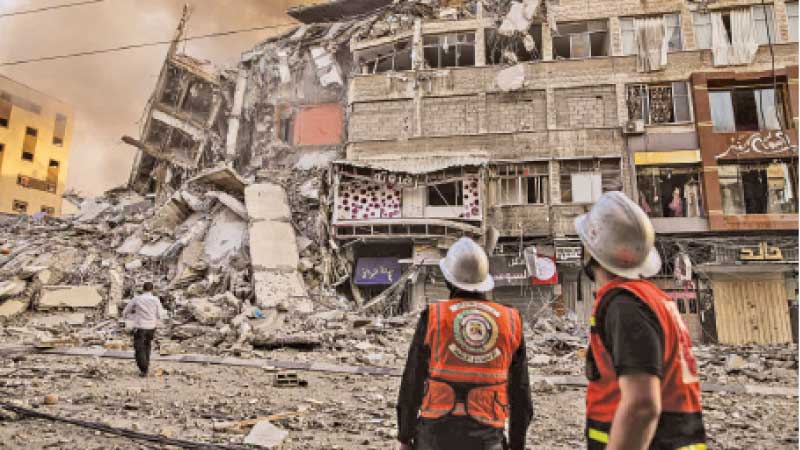 Scenes of the current conflict. The violence has claimed many lives.

In most civil wars and military conflicts across the politically-volatile Middle East, including in Syria, Yemen and Palestine, the ongoing battles are being fought not on a level playing field but on an uneven killing field.

And it is more so in the current fighting between Israelis and Palestinians, described as a “Middle East carnage” where children are among the civilians killed in airstrikes. The fighting is largely a battle of weapons: sophisticated US-supplied state-of-the-art fighter planes versus home-made rockets and mortars.

The overwhelming Israeli firepower that continues to be unleashed on Palestinians – which has so far killed 192, including 58 children, in a weeklong confrontation — is perhaps reminiscent of the Algerian war of independence (1954–1962) when France, the colonial power, used its vastly superior military strength to strike back at the insurgents with brutal ferocity. 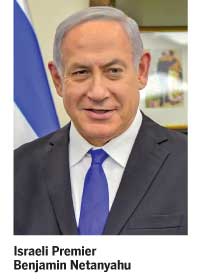 While France was accused of using its air force to napalm civilians in the countryside, the Algerians were accused of using handmade bombs hidden in women’s handbags and left surreptitiously in cafes, restaurants and public places frequented by the French nationals living in occupied territory.

In one of the memorable scenes in the 1967 Academy Award winning, cinematic classic “The Battle of Algiers,” which re-created Algeria’s war of independence, a handcuffed leader of the National Liberation Front (NLF), Ben M’Hidi, is brought before a group of highly-partisan French journalists for interrogation.

One of the journalists asks M’Hidi: “Don’t you think it is a bit cowardly to use women’s handbags and baskets to carry explosive devices that kill so many innocent people [in cafes and night clubs?]

Responding with equal bluntness, the Algerian insurgent retorts: “And doesn’t it seem to you even more cowardly to drop napalm bombs on unarmed villages on a thousand times more innocent victims?”

“Of course, if we had your fighter planes, it would be a lot easier for us,” he adds. “Give us your bombers, and you can have our handbags and baskets.”

Perhaps, in the current confrontation, it would be interesting to see the roles reversed: the Palestinians with American fighter planes and battle tanks and Israelis with homemade rockets and mortars.

Besides F-15 and F-16 fighter planes, the Israelis also use a wide array of US weaponry, including Apache helicopters, M60 battle tanks, Armoured Personnel Carriers (APCs) and heavy artillery.

Israel’s prodigious military strength and its economic stability are attributed largely to unlimited American economic and military assistance from successive US administrations and backed by American politicians.

On May 16 alone, 33 Palestinians were killed, in what was described as “the single deadliest airstrike” by the Israelis. But, as of now, and despite a UN Security Council meeting, there are no indications of a halt to the killings.

Israeli Prime Minister Benjamin “Bibi” Netanyahu was quoted as saying: “We will do whatever it takes to restore order and quiet.”

According to a report in the New York Times, Israeli intelligence has estimated that Palestinian militants, including Hamas and Islamic Jihad, have access to about 30,000 rockets and mortar projectiles stashed in Gaza, most of them manufactured in Gaza with technical expertise from Iran. The rocket attacks have claimed 10 lives so far.

Asked about the massive Israeli military arsenal, Pieter Wezeman, Senior Researcher, Arms and Military Expenditure Programme at the Stockholm International Peace Research Institute (SIPRI) told IPS the US, by far, has been the most important arms supplier to Israel since the 1970s.

He pointed out that over the past five years the uninterrupted US supplies included F-35 combat aircraft (described as one of the most advanced state-of-the art fighter planes), F-15C combat aircraft and many thousands of guided bombs and armoured vehicles.

The purchases of such weapons (and similar weapons before), he said, are funded by the over US$ 3.0 billion in annual military aid the US provides to finance Israeli arms procurement.

In addition, the US also finances and provides technical input into Israel developing missile defence systems, include those that have been used so intensively in the past few days. The US also supplies Israel with a range of other military equipment, ranging from trucks and rifles to spare parts for older US-supplied equipment, Wezeman said.

A Reuters news agency report in September 2016 said the US agreed to provide Israel a staggering US$ 38 billion package in military assistance over the next decade, described as “the largest such aid package in U.S. history, under a landmark agreement signed by the two countries.”

Meanwhile, UN Secretary-General Antonio Guterres told a Security Council meeting on May 16: “The current hostilities are utterly appalling. This latest round of violence only perpetuates the cycles of death, destruction and despair, and pushes farther to the horizon any hopes of coexistence and peace.”

Fighting must stop. It must stop immediately, he urged. Rockets and mortars on one side and aerial and artillery bombardments on the other must stop. “I appeal to all parties to heed this call.” The United Nations, he said, is actively engaging all sides towards an immediate ceasefire. 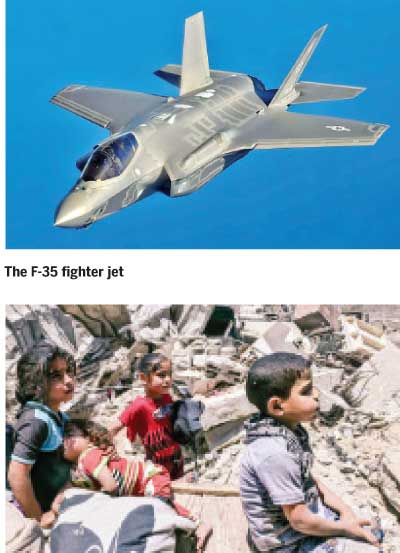 US Ambassador to the UN Linda Thomas-Greenfield told the 15-Member Council “the United States has been working tirelessly through diplomatic channels to try to bring an end to this conflict, because we believe Israelis and Palestinians equally have a right to live in safety and security.”

China’s Foreign Minister Wang Yi, who chaired the meeting as Council President for the month of May, said: “We call upon the US to shoulder its responsibilities, take a just position, and together with most of the international community support the Security Council in easing the situation.”

One more submarine from Germany is planned for delivery this year while a contract for three more is apparently still being negotiated. Germany is also in the process of delivering four frigates to Israel, which will be equipped with Israeli combat systems.

Italy has supplied eight advanced military trainer aircraft to Israel 2016–2020 (in addition to 22 delivered five years earlier). These are used to prepare and train pilots who will fly the US supplied combat aircraft.

Asked about the state-of-the-art US weapons systems in the Israeli military arsenal, Wezeman said the US supplied combat aircraft, especially F-16s and F-15s, and US guided munitions have played a central role in Israel’s military actions in Gaza and elsewhere (including Syria and Lebanon).

The most advanced weapon the US supplies to Israel is the F-35 combat aircraft, including a few delivered just a few weeks ago. Of the 50 ordered, about 31 have been delivered so far, while more are planned to be ordered.

(Thalif Deen is a former Director, Foreign Military Markets at Defense Marketing Services; Senior Defense Analyst at Forecast International; and military editor Middle East/Africa at Jane’s Information Group. He is the author of a newly-released book on the United Nations titled “No Comment – and Don’t Quote Me on That,” from which this article is adapted.)

Disclaimer: The uneven killing fields of the Middle East By Thalif Deen - Views expressed by writers in this section are their own and do not necessarily reflect Latheefarook.com point-of-view