Targeted by Israeli security forces, the symbolic mosque was at the centre of much of Jerusalem’s long weekend of violence

Al-Aqsa Mosque, one of the three holiest sites in Islam, has long been an emblem of Palestinian resistance to Israeli occupation.

Al-Haram al-Sharif (the Noble Sanctuary), the complex in Jerusalem’s Old City that houses the mosque – which includes the Dome of the Rock and other Islamic shrines – is arguably the most significant symbol of Palestinian sovereignty.

Jerusalem has been on edge for weeks over Israel’s restrictions on Palestinian access to parts of the Old City during the Muslim holy month of Ramadan, and Israeli authorities’ attempted eviction of several Palestinian families in the Sheikh Jarrah neighbourhood to make way for Israeli settlers.

Al-Aqsa found itself at the centre of a long weekend of violence from Friday, that left hundreds of people injured and led to a series of deadly rocket exchanges between the Israel military and Hamas in Gaza.

This is how the prayer, protest and violence at al-Aqsa unfolded.

On the last Friday of Ramadan, thousands of Palestinian worshippers gathered to pray outside the Dome of the Rock.

In total, more than 70,000 congregated to take part in the final Friday prayers of the holy month, according to Sheikh Azzam al-Khatib, head of the Waqf Islamic affairs council. 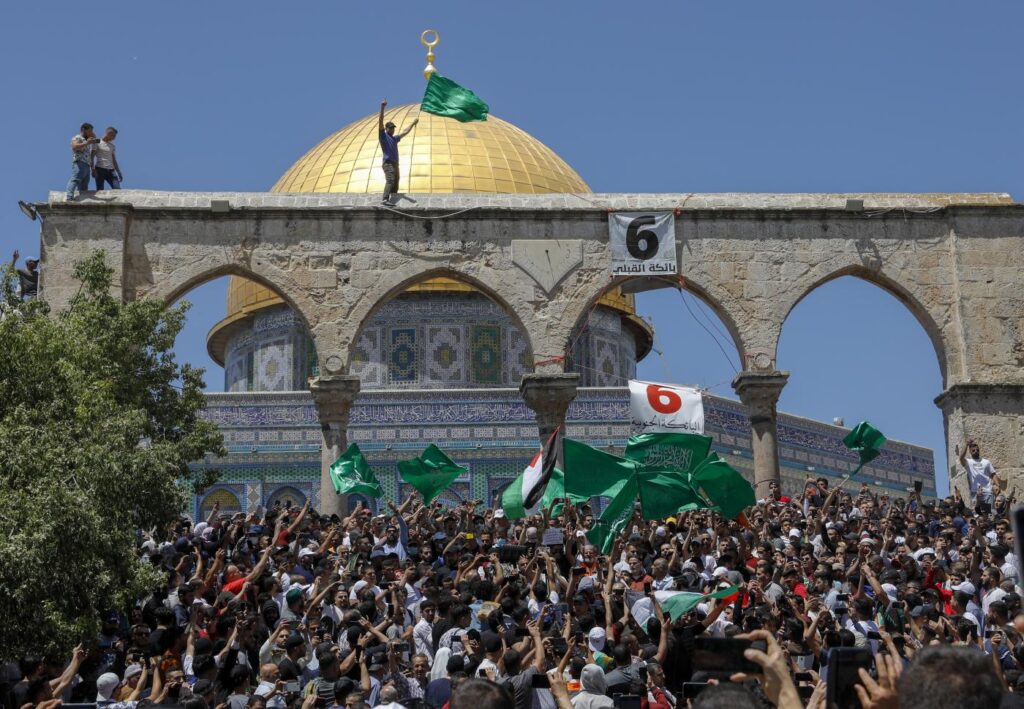 Tensions between Israelis and Palestinians had reached boiling point in recent days, as events in Sheikh Jarrah continued to unfold. While Palestinians in the neighbourhood were resisting eviction orders that would force 40 Palestinians, including 10 children, out of their homes, supporters inside Israel, East Jerusalem and the occupied West Bank organised protests in solidarity with them and others facing imminent eviction.

After Friday prayers, Palestinians at the mosque began their own demonstration, raising both Palestinian and Hamas flags.

Israeli police had deployed large numbers of officers to the city of Jerusalem, especially in the Old City, and closed off the surrounding streets that led to the mosque. Those who came to take part in the prayers were met with iron barriers and forced to go through identity checks.

Israeli police violently dispersed the protesters around Jerusalem throughout the day, forcing many to retreat to the mosque and hide within the confines of the shrines inside the complex.

Later that evening, Israeli forces used tear gas, stun grenades and rubber-coated steel bullets to disperse worshippers at the mosque. Hundreds were injured and hospitalised, according to the Palestinian Red Crescent.

The Red Crescent said that many of the injuries reported were to the head and eyes. Israeli police said six officers were injured as tensions intensified throughout the night.

Videos showed worshippers trying to ignore the tear gas canisters exploding around them as they prayed. Some appeared to be struck directly, others were engulfed in smoke. All fled the armed Israeli security forces flooding the complex. The man who remained longest appeared to be hit by one of the men in uniform.

Palestinian civil society called for a day of anger on Saturday in response to the crackdown.

Friday’s violence prompted protests by Palestinian citizens of Israel in towns throughout the country, including Jaffa and Nazareth, in a show of anger against the Sheikh Jarrah evictions and the storming of al-Aqsa.

Israeli forces carried out arrests and raids throughout occupied East Jerusalem and built up their presence in the city on Saturday. This created a tense atmosphere ahead of the 27th night of Ramadan, one of the month’s holiest nights, which typically draws large crowds of worshippers to al-Aqsa, completely filling its courtyards. 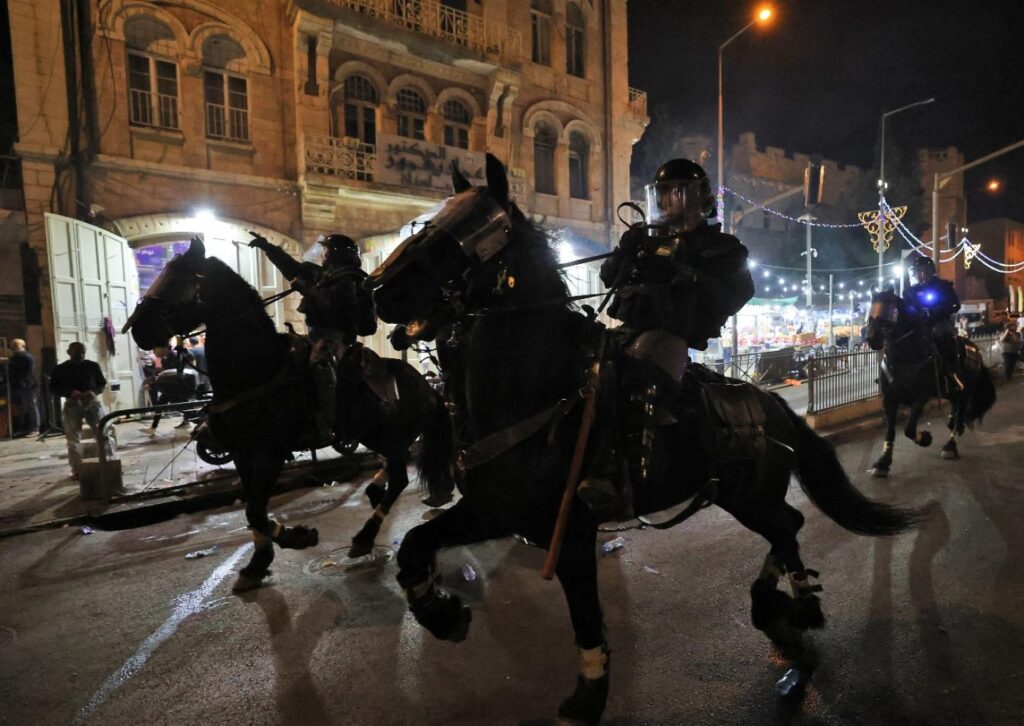 Israeli Police Commissioner Yaakov Shabtai said that the force was sending extra officers to Jerusalem in anticipation of more protests on Saturday night.

Despite the febrile atmosphere in the city, some 90,000 Palestinian worshippers flocked to al-Aqsa for prayers.

Many travelled long distances from the occupied West Bank or from Palestinian-majority towns inside Israel, but Israeli forces reportedly blocked buses bringing them to Jerusalem, forcing them to walk along highways. Some Palestinians in the city drove down to ferry the stranded worshippers to Al-Aqsa.

Mohammed Atiq, from the West Bank town of Jenin, said Friday’s raids on al-Aqsa did not deter him from making the journey.

“They began attempts to clear out al-Aqsa, attempts to ruin the night of worship,” he told Middle East Eye. “But the will of the worshippers is stronger than bullets.”

Suad Abu Eraim, from the town of Yatta in the southern West Bank, said she spent hours waiting at Israeli checkpoints before finally reaching Jerusalem.

“This is al-Aqsa mosque, this mosque is ours, we must stay tied to it,” she told MEE. “We must be present here, young or old, from every place.”

Though the prayers were conducted safely, Israeli forces quickly began cracking down on Palestinians trickling out of the Old City after the service, arresting many and wounding at least 90, according to medics.

Rubber-coated metal bullets, tear gas and smoke grenades were fired at Palestinians at the Damascus Gate, which was adorned with lights to mark Ramadan. Women with bloody faces were seen being led away by medics. A short distance away, Israeli forces and settlers tore up a protest camp in Sheikh Jarrah.

Jerusalem remained on edge on Sunday following another night of violence, as solidarity protests took place in cities worldwide, including Amman, Berlin, Chicago, London and Istanbul.

Staff and volunteers in al-Aqsa washed down the mosque’s courtyards the morning after Laylat al-Qadr, while hundreds of Palestinians rallied under the Dome of the Rock after the dawn Fajr prayer.

The passage between the Dome of the Rock and al-Qibli Mosque was packed with people clapping and chanting: “In spirit, in blood, we sacrifice for you al-Aqsa.”

There were some confrontations with Israeli forces at the nearby Chain Gate, which many of the protesters had exited through, still chanting. Palestinians threw rocks while Israeli forces lobbed stun grenades into the mosque complex.

Compared to other days, Sunday was relatively quiet. But fears were growing about an event planned on Monday as part of Jerusalem Day, which marks Israel’s capture and subsequent occupation of East Jerusalem during the 1967 war.

Thousands of Israelis, many from the religious far-right, planned to enter the al-Aqsa complex and chant anti-Palestinian slogans as part of the Flag March.

But Israeli security officials feared that the march would only add fuel to the fire after a week of confrontations in the city, and lobbied politicians to either postpone the event or limit the number of attendees and shorten the route.

Half an hour before the Flag March was scheduled to begin, organisers called it off. Hundreds of Israelis gathered nonetheless, the vast majority of whom were right-wing religious nationalists. The crowds made their way into the plaza after a march through parts of Jerusalem’s Old City, under the protection of Israeli police.

According to the Palestinian Red Crescent, 305 Palestinians were injured and 228 others hospitalised – some in a field hospital set up near al-Aqsa – including four in a critical condition.

Ehab Jallad, a historical researcher from Jerusalem, was in the mosque when Israeli forces stormed in and attacked worshippers. He recounted his experience to MEE.

“We prayed Fajr [dawn prayers] at around 4am and watched the settlers as they continued marching in, carrying with them stones and whatever materials they could to form a barrier. Israeli forces were positioned in strategic locations, targeting worshippers in the area.

“While young people were preparing for their seminar at 8am, Israeli police started targeting us with snipers using rubber bullets. Some of the young people reacted with stone-throwing,” he added.

“I was near the Qibli Mosque when the police started attacking us. They were positioned in rows, and were targeting us with tear gas. They were aiming to drag people to the north side, and from there to the gate to evacuate the mosque.”

It was terrible,” Jallad told MEE. “Within minutes, it felt like the sky was falling down on us. I wanted to try and escape the rubber-coated bullets, so I hid, in order to be out of sight.

During the raid, videos emerged of calls blasting out over al-Aqsa’s tannoy, appealing for help for Palestinians trapped inside al-Aqsa’s al-Qibli Mosque. Footage from inside the Qibli mosque also showed vast plumes of tear gas.

A spokesperson for the Jerusalem emergency medical services said Israel was denying medics access to the mosque and had even confiscated some carts used to evacuate the wounded. Israelis also reportedly seized the mosque’s audio control room at one point, hampering the Palestinians’ ability to safely coordinate.

Speaking to Middle East Eye in Jerusalem, Palestinian activist Hanady Halawani said many had been wounded on Monday, and journalists covering the raid had also been targeted by Israeli forces.

She added that Israeli police stormed al-Aqsa’s Qibli shrine, located in the southern part of the complex, as people were praying. 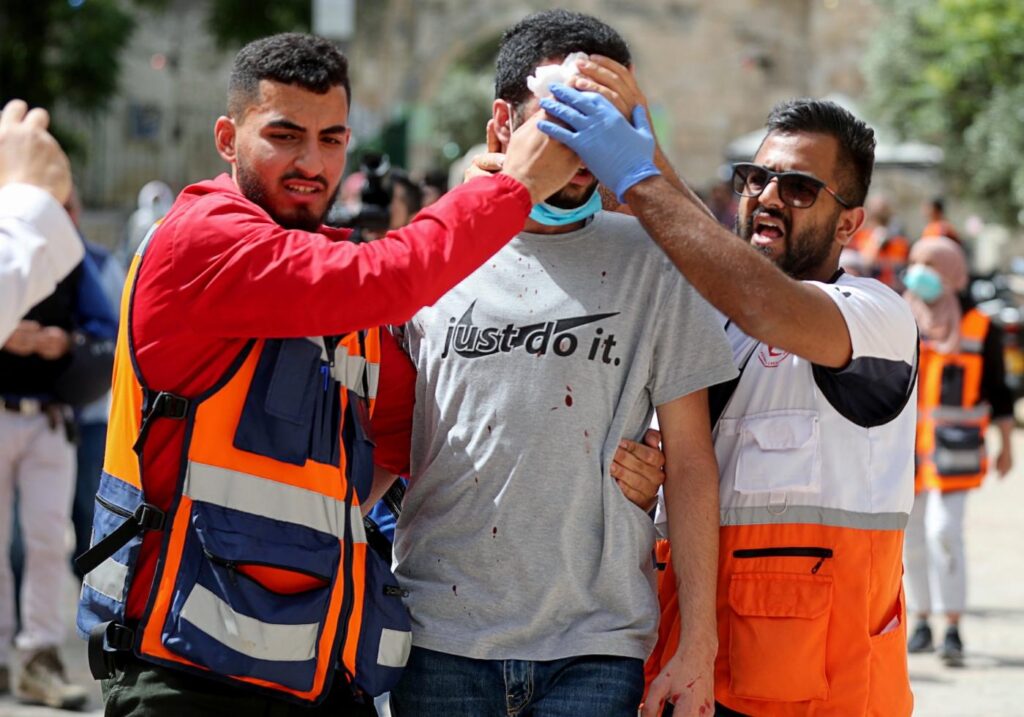 “We have reached a new point now, and it’s very dangerous. The occupation has crossed all the red lines and all the feelings of Muslims. Al-Aqsa, Ramadan, women: there are no lines which have not been crossed,” Halawani said. 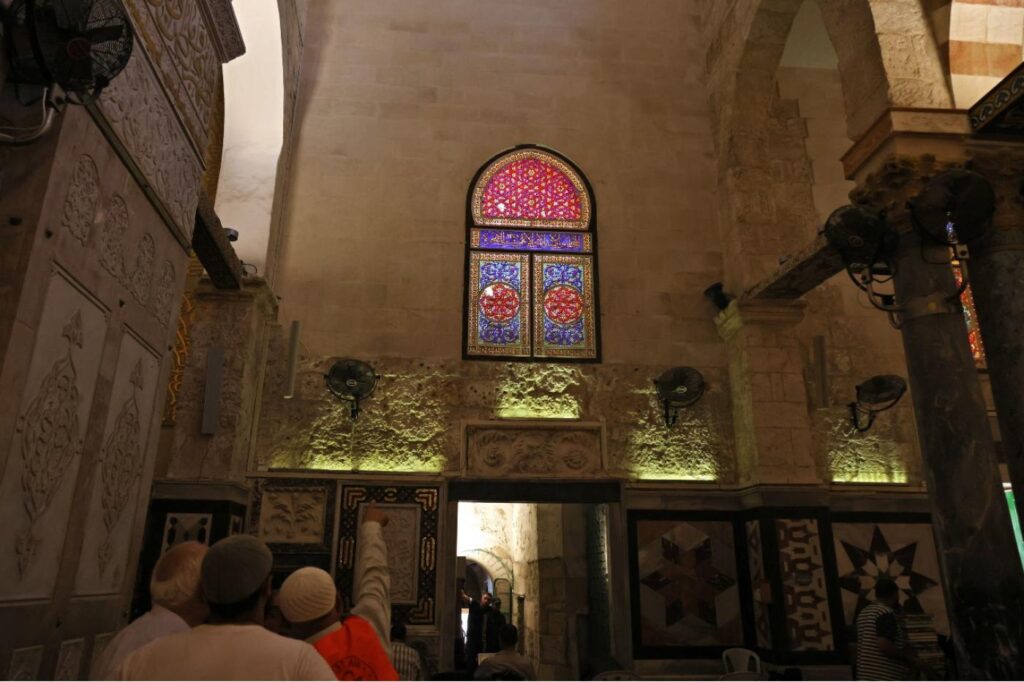 The director of Jerusalem’s Endowments Department also told Al Jazeera Arabic that Israeli forces had confiscated the keys to all entrances to al-Aqsa complex.

At some point during the raid, some of the stained glass windows at al-Aqsa were smashed by Israeli security forces.

Following the morning’s violence, the mosque was littered with rocks and shards of glass, and the carpets were stained.

MEE correspondent Latifeh Abdellatif reported that only Palestinians above the age of 40 were allowed into the courtyard by Israeli police via the Lions’ Gate.

Israeli forces violently stormed al-Aqsa for the third time in four days on Monday evening. Tear gas was used to disperse crowds, sound grenades were aimed at people, and heavily armed police made their way into al-Aqsa, causing further damage to the interior of the buildings.

After hours of attacks against worshippers, trapping hundreds inside the mosque’s buildings, Israeli forces withdrew from the complex.

Much of the attention turned to Gaza on Tuesday, with Hamas and Israel exchanging rocket fire amid warnings of a “full-scale war”.

According to Gaza’s health ministry, the number of Palestinians killed by Israeli air strikes on the besieged enclave since Monday has increased to 36 civilians, including 12 children, while 220 people have been wounded.

In Israel, at least five civilians have been killed by missiles fired from Gaza in retaliation for the air strikes, according to Haaretz, including one teenager and her father.

The Palestinian Red Crescent reported that Israeli forces blocked medics from entering the mosque, amid attacks on Palestinians inside.

“Blocking medical rescue teams from reaching the wounded is a blatant violation of international humanitarian law, which requires the occupying force to facilitate the mission of medics and provide healthcare to the sick and injured,” the Red Crescent said in a Facebook post.

Israel’s raids on al-Aqsa may, under international law, constitute war crimes. Yet while some have described the events at the mosque over the past few days as “unprecedented”, there have been several major incidents of Israeli police violence at the mosque and its immediate vicinity over the years.

In October 1990, for example, Israeli security forces massacred around 21 Palestinians, shooting live bullets into a crowd.

Disclaimer: Al-Aqsa under attack: How Israel turned holy site into a battleground By Frank Andrews - Views expressed by writers in this section are their own and do not necessarily reflect Latheefarook.com point-of-view