Skip to content
PALESTINE
Spread the love
Wafa Aludaini survived Israel’s latest assault on the besieged Gaza Strip, but it’s the tales of Palestinian children that have moved her to speak up 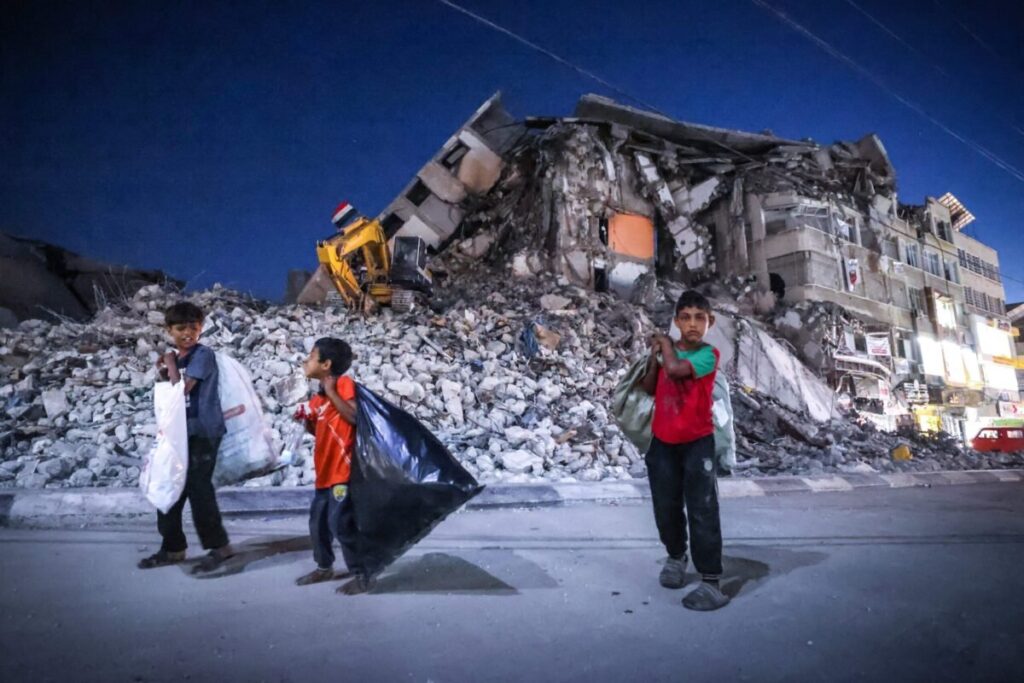 Israel bombardment of Gaza has ended, but the pain and destruction remain. The stories of children who survived the latest onslaught have caused me anguish, and I hope they are never forgotten by the international community as it continues its dealing with the occupation.

Six-year-old Suzy Ishkuntana appeared from under the rubble covered in dust after Israeli warplanes bombed her home on Al-Wihda Street in the west of Gaza City before dawn. Her mother and four siblings were killed in the blast. Her father, who had left the house to buy snacks for his children to keep their minds off the bombing, was killed by the same airstrike while on his way home.

Orphaned, Suzy wouldn’t speak to anybody but her grandparents.

She described seeing her little brothers and sisters covered in blood calling out for their father and their mother to save them until their voices faded away.

She screamed and cried harder the longer she was trapped beneath the rubble. She told her grandmother that her mother had broken her promise; that Suzy had wanted to go to the bathroom but was afraid to die alone, and her mother promised that if they died, they would die together. But they all died, and Suzy is now alone.

Suzy spent more than seven hours trapped beneath her house. Her body was covered in bruises, and she now suffers “extreme trauma”. Her grandmother says Suzy now barely speaks or eats, and she keeps asking for her mother. “When she asks, I tell her that your mother and siblings are in paradise, and she says, ‘I want to die to be with them.'”

Nine-year-old Maysaa Abu Alouf is another survivor. Occupation planes targeted the five-storey building her family lived in, killed 14 members of her extended family. Maysaa was pulled out alive from beneath the rubble on 16 May but she still vividly recalls the moments before the explosion; she told her grandmother that she was playing and laughing with her siblings and then she found herself in the street covered in dust. Maysaa lost her mother and two of her sisters in the attack.

She now fears tall buildings, cries continuously and is too scared to go outside.

When I went to Beit Hanoun in the north of the Gaza strip, I visited the area where 11 houses were hit in a massive Israeli airstrike. There I found 11-year-old Ibrahim Nasir searching under the remains of his destroyed home. He says: “We survived miraculously. The whole house collapsed. The house was violently shaking. The roof and walls started to collapse. And there was no safe place to go but to hide.”

He continues: “It was so terrifying, everyone was in the dark saying the shahada [declaration of faith], thinking that we were going to die because escaping death was difficult.”

Ibrahim’s entire family were buried under the rubble of their homes, but within an hour they had found a way out. “We were about 30 people in the house, and we all came out of that small hole. Our bodies were covered in dust, and some of us had minor injuries.”

“After leaving the destroyed house, we went to the nearby hospital to take cover, and we ran barefoot in terror,” as shells rained down in the nearby neighbourhood.

He continues to dream of these horrifying moments, while many children now suffer from involuntary urination as a result of the trauma.

Psychologist Inas Al-Khatib says: “What the children went through under the bombardment will cause them psychological trauma that often appears after the event.” There are, she explains, common symptomatic behaviours that appear in children following trauma including involuntary urination, loss of appetite, and unwillingness to speak, as well as violent outbursts and screaming.

Al-Khatib says that the loss of parents and the destruction of their homes are among the most traumatic experiences a child can suffer, as the family is the warm embrace that gives the child safety and security, and the home is the safe haven.

Victims of such attacks may need Captive Thought Therapy, cognitive behavioural or spiritual therapy as well as relaxation and movement techniques, depending on what they have experienced.

Children may develop behavioural and mental illnesses which require medication and ongoing treatment, she added. While those who suffer as a result of continuously reliving and reflecting on the trauma may also experience long-term emotional difficulty.

Mental health care services in Gaza are insufficient to deal with the extent of the problems suffered by those who have survived the war, Al-Khatib adds.

Some 254 Palestinians were killed in Israel’s latest offensive, including 66 children. Thousands were injured and tens of thousands were displaced once again by the occupation. Israel’s cycle of crimes does not just extend to death or destruction today but also to the untold psychological damage it has caused future generations.

Disclaimer: Gaza's children narrate how they survived the Israeli assault - Views expressed by writers in this section are their own and do not necessarily reflect Latheefarook.com point-of-view