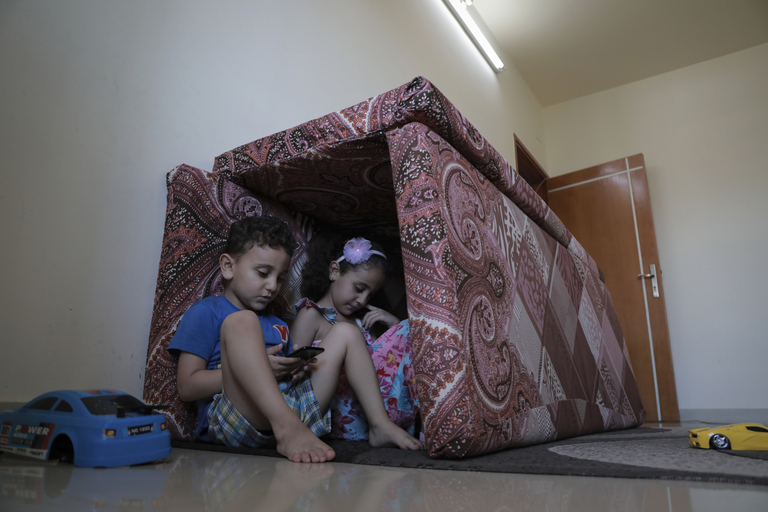 Jamal Mghames and his sister, Joury, inside a fort of cushions at home in Gaza City during bombing May 19, 2021. (Loay Ayyoub / The Washington Post). 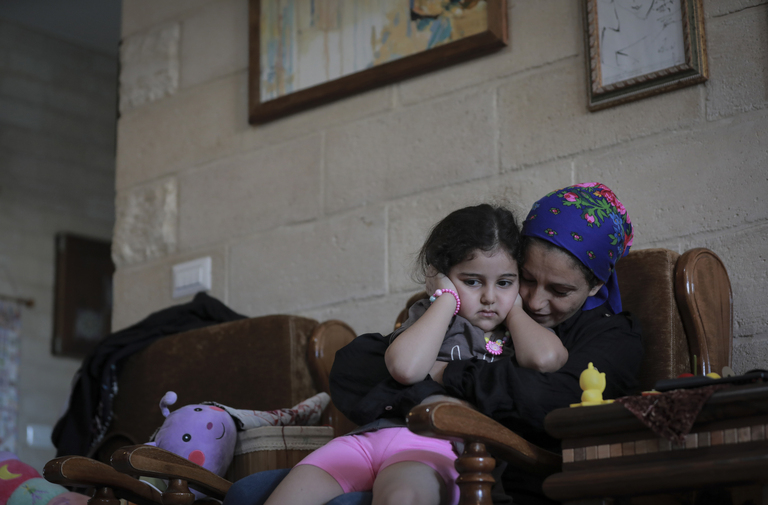 Maha Al-Daya embraces daughter Yafa after hearing the sound of the bombing in Gaza on May 19, 2021. (Loay Ayyoub / The Washington Post). 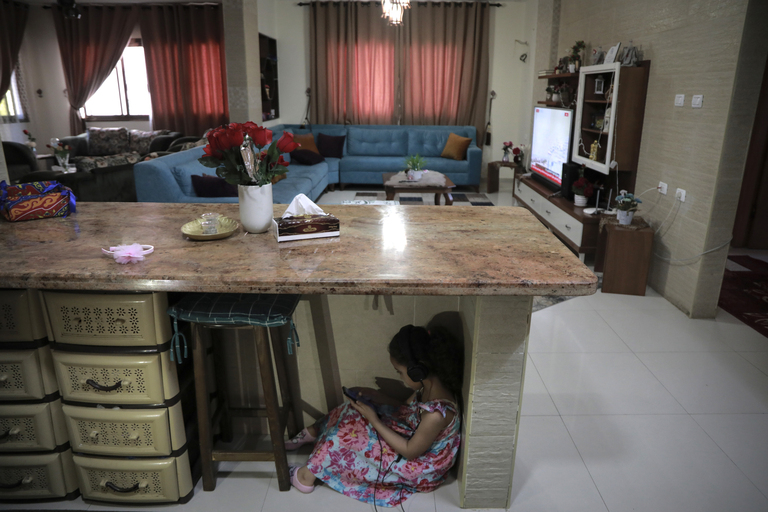 Joury Mghames, 7, hides under a counter in the kitchen of her home in Gaza City during Israeli bombing on May 19, 2021. (Loay Ayyoub / The Washington Post).

GAZA CITY — Ayman Mghames couldn’t stop the nightly Israeli bombing that was making his 7-year-old daughter, Joury, cry. But just maybe he could turn the volume down.

Just after midnight on the fourth evening of the bombardment, the Palestinian musician and rapper left the kitchen where his family of four was sheltering and retrieved a pair of noise-canceling headphones. He fit them over the little ears, dialed up a YouTube video of “The Smurfs” and hit play.

“She started laughing,” Mghames recalled. “She said, ‘Dad, can you hear me?’ Now she sleeps in them.”

Mghames, 36, who had been in another bedroom when an Israeli missile struck their house in 2009 and killed his father, knows well that headphones won’t protect his children from the bombs that have already killed more than 200 Gazans in the past 10 days, including more than 60 children, according to Gazan health officials.

But like countless parents, Palestinian and Israeli, cowering in homes, shelters and stairwells under the air war raging between Israel and the Hamas militant group, he is doing anything he can to shield them from the trauma of being under fire.

Dads and moms on both sides of the border have put aside their own terror to launch indoor soccer games, dance parties and cooking contests as distractions. They have built pillow forts under their strongest doorways. One Gaza mother invented a game of modified peek-a-boo for her toddler daughters — a video shows one girl playfully slapping a hand over her mouth at each boom from outside, her eyes reflecting both delight and worry.

Zaher Sbaih has his 8-year-son sing and play a toy guitar for his grandmother each time the airstrikes resume. The “concert” soothes everyone, Sbaih said, and it follows a full day of coloring, dancing and as much running around as the small house will allow.

We keep them tired so maybe they can sleep and not wake up if the bombs are not too bad.”
— Zaher Sbaih

“We keep them tired so maybe they can sleep and not wake up if the bombs are not too bad,” said Sbaih. His family is staying with his mother after their own apartment building was destroyed by a strike last week, hours after the family had been warned to evacuate the area. He pulled the toy guitar from the rubble the following morning.

Sbaih runs a nonprofit group that provides aid to children affected by poverty and conflict. With most of Gaza’s population hunkered down, he hasn’t been able to meet with the families he usually serves. But he is bringing his expertise to bear in his own household: Be stable. Distract and engage the children. Let them know they are not alone.

The hardest is not showing his own fear to the kids, he said. As they color, he and his wife draw and paint to work through their own emotions.

“It is very difficult,” Sbaih said. “I realized after few days that I wasn’t eating properly. I had to ask my brother to remind me to drink water.”

Maha al-Daya, 44, recalled when her two youngest children dived into her lap after a devastating blast.

“I was crying without a sound so they didn’t hear me,” she said. “They ask: ‘What was bombed? Where?’ I tell them: ‘Far from this place. Do not be afraid.’ But I myself am afraid.”

In Israel, where more than 10 people have been killed by thousands of rockets fired from Gaza, including two children, a relentless barrage has forced some families to run for air raid shelters more than a dozen times a day. One mother said she was shaking so badly that she feared her hug would only add to her son’s terror as explosions thudded outside, mostly the sound of air defense missiles intercepting Hamas rockets.

“My son can tell the difference between a rocket that is hit in the air and one that lands outside,” said Stella Weinstein, a mother of three. “That’s not something a 7-year-old should know.”

My son can tell the difference between a rocket that is hit in the air and one that lands outside. That’s not something a 7-year-old should know.”
— Stella Weinstein

Weinstein lives in Ashdod, a port city 14 miles from Gaza that has been a frequent target of rocket fire from Hamas and the Islamic Jihad group in recent years.

Life in southern Israel has long entailed regular air raid sirens. Residents have 20 seconds or less to dash to a communal bomb shelter, an apartment stairwell or, increasingly, one of the in-house fortified rooms mandated for all new construction.

After years of hiding in stairwells, Weinstein said she and her husband are lucky to have gained a strongroom in the sixth-floor apartment they moved to last month. They have since fixed it up as a playroom to make it more pleasant for their son, Ido, and 5-year-old twins. On the first night of rocket attacks, which began May 10, she said they had to rush into the room more than 15 times and have decided to sleep in it since.

But any sense of safety vanished when, in an attack a few miles away, rocket shrapnel penetrated the shutter of a similar strongroom Friday and killed a 5-year-old boy — also named Ido — who was sheltering next to his mother. Three days later, a building across the street took a direct hit from a rocket, their own room shaken by the deafening blast.

Weinstein’s children no longer stray more than a few yards from the strongroom and refuse to play even on the apartment terrace because, she said, they don’t want their soccer ball to be burned like the devastated building across the street. A neighbor’s 2-year-old has stopped eating, she added.

Weinstein was quick to note that women caring for children in nearby Gaza confront far greater dangers.

“I’m a mother, she’s a mother, and she’s in a much more terrible situation,” Weinstein said. “But of course, we are all worried about the effects on our children.”

Many Israelis have been tuning in to Yoram Yovell, a popular Hebrew University neuroscientist who has been providing guidance for parents on near-nightly television appearances. In an interview, he said parents in Israel and Gaza are doing the right thing by keeping children active and constantly reassuring them that no matter what happens, the family will go through it together.

“Parents shouldn’t be sharing their own anxieties,” Yovell said. “‘Yes, Mommy is worried, but Mommy knows that we are going to be safe.’”

Parents shouldn’t be sharing their own anxieties. ‘Yes, Mommy is worried, but Mommy knows that we are going to be safe.’”
— Yoram Yovell

Mghames said he doesn’t get to see child psychology advice on Gazan television, so he has been inventing his own techniques. (Yovell pronounced the idea for using the noise-canceling headphones a very good example of “reducing exposure.”)

His son, Jamal, 4, has not expressed much alarm at the noisy nights or the need to flee their home, Mghames said. But his daughter and wife are both teary and anxious.

She has begun to search the internet for places without bombs and asked to move with their grandmother to Germany or Abu Dhabi, capital of the United Arab Emirates.

In response, Mghames has become the director of distractions. He and the kids spend hours coloring, “helping” his wife in the kitchen, dancing to videos and comparing reactions to YouTube influencers. They use cushions to build pretend houses where he is the child, and Joury is the mother.

And sometimes, when an explosion is too close or the news is too frightening, he has to step into the bathroom alone, a caregiver in need of care.

This story was originally published at washingtonpost.com. Read it here.

Disclaimer: In Gaza, parenting under fire By Steve Hendrix and Hazem Balousha - Views expressed by writers in this section are their own and do not necessarily reflect Latheefarook.com point-of-view