The Israeli government’s decision to start the process of registering the ownership of land adjacent to al-Aqsa Mosque in occupied East Jerusalem risks enabling a takeover that has “severe far-reaching implications”, rights groups warned on Monday.

The justice ministry last week initiated the “settlement of land title procedure” in Abu Thor area as well as the Umayyad Palaces site adjacent to the southern wall of al-Aqsa Mosque.

The procedure is using a government fund allocated to “reduce socio-economic gaps” and “create a better future” for Palestinians in the city.

However, the fund has been largely utilised to register land for illegal settlements and will ultimately lead to further Palestinian dispossession, according to a joint statement by Israeli rights groups Ir Amim and Bimkom seen by Middle East Eye.

The Jerusalem-based NGO said there is speculation that the Israeli government may be attempting to register the area south of al-Aqsa Mosque as state land.

“[The procedure] carries possible disastrous ramifications for hundreds of Palestinian homes in Abu Thor, while the other has an acute potential for escalating tensions due to its highly sensitive location in close proximity to Al Aqsa,” the joint statement read.

Sheikh Najeh Bakirat, the deputy director of the Jerusalem Islamic Waqf, said on Monday that changing the ownership of Umayyad Palaces is invalid and breaches the Geneva Convention, according to Palestinian media.

Israel’s control of East Jerusalem, including the Old City, violates several principles under international law, which stipulates that an occupying power has no sovereignty in the territory it occupies and cannot make any permanent changes there.

Almost 90 percent of land in East Jerusalem is unregistered since Israeli authorities halted registration following its occupation of the city in 1967.

In 2018, the government began for the first time promoting the “settlement of land title procedure”.

However, Ir Amim said in 2020, after a year of monitoring the process, that it was being used as a tool to “seize more land in East Jerusalem, leading to the expansion of Israeli settlements and further Palestinian dispossession”.

The area south of al-Aqsa Mosque is particularly sensitive due to continued Israeli government and settlement activity in the area that could replace Palestinian residents with biblical-themed tourist parks.

In the town of Silwan south of al-Aqsa, more than 7,820 demolition orders – both administrative and legal – have been issued against Palestinians, putting thousands of people at the risk of displacement, according to the Silwan Lands Defence Committee.

The area is also the location of government archaeological excavation work that Palestinians say threatens the foundation of al-Aqsa Mosque. 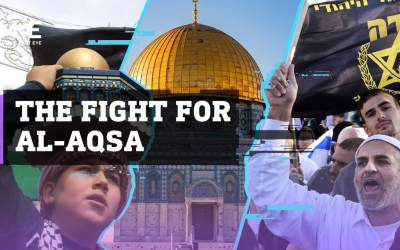 The fight for al-Aqsa Mosque

Since the late 1970s, the Israeli government has been carrying out excavations under the Old City and the Palestinian neighbourhood of Silwan south of al-Aqsa Mosque, in search of the three-millenia old City of David. It is the supposed seat of power of King David, the biblical founding father of the Jewish nation.

To date, Israel has invested at least 40 million shekels ($11.7m) in the initiative which is carried out by the Israel Antiquities Authority (IAA) and funded by settler organisation Ir David Foundation, commonly known as Elad.

The settler group is also the owner of the City of David national park, which it took control of after an agreement was struck with the Israel Nature and Parks Authority in 2002.

The national park for the ancient city has been turned into a major tourist attraction, with hundreds of thousands of visitors each year.

The Umayyad Palaces (known to Israelis as the Ophel Archaeological Park) is situated between the City of David and the southern walls of al-Aqsa Mosque.

“There is grave concern that the state is advancing the settlement of title process in the Umayyad Palaces/Ophel site to enable Israeli takeover of this territory through its formal registration as state land, while aiding state-backed settler groups in their aggressive efforts to gain control of these highly sensitive locations,” Ir Amim and Bimkom said.

Disclaimer: Israeli move to register land adjacent to al-Aqsa Mosque raises fears of takeover - Views expressed by writers in this section are their own and do not necessarily reflect Latheefarook.com point-of-view