In May last year, accompanied by his wife and son, Ben-Gvir posted a picture calling for the destruction of Masjid Al Aqsa to establish a Jewish Temple on the site.  Ben-Gvir used the latest visit to indicate both to his followers and to Netanyahu that he answers to no one, and that he will not compromise on his own extreme ideology of Jewish supremacism.

The visit sent another message too: Ben-Gvir appears ready to provoke a religious war – one that would demonstrate once and for all the power of his kind of Jewish zealotry and thuggishness to subdue all Muslim opposition. Al-Aqsa could be the powder-keg to ignite such a conflagration.

Ben-Gvir who   made several trips to the Masjid Al Aqsa compound as a Knesset member has also led contentious nationalist marches through the Muslim Quarter in Jerusalem’s Old City. On several occasions, he set up an ad hoc office in East Jerusalem’s Sheikh Jarrah neighborhood, which has also been at the center of Israeli-Palestinian tensions, kindling unrest.

Ben-Gvir , soaked in Palestinian blood like all Zionist Jewish  leaders,    is a pistol-packing, ex-member of an outlawed Jewish militant group. He came up through the Kahane Chai organisation, which is blacklisted in Israel and the United States for its virulently anti-Arab doctrines. Ben-Gvir has also been convicted for racist incitement against Arabs and support for “terrorism”. He has also expressed support for Baruch Goldstein, an Israeli American who killed 29 Palestinians at the Ibrahimi Mosque in 1994.

Ben-Gvir was testing the waters. He will surely be back soon, with bigger provocations. Both during and after Israel’s recent general election campaign, he called for Jews to be able to pray at the Muslim holy site, and has said he will demand that Netanyahu institute what he terms “equal rights for Jews” there.

Hamas spokesman Abd al-Latif al-Qanua said that the visit was “another example of the arrogance of the settler government and their future plans to damage  Al-Aqsa Mosque”. The Palestinian resistance will not allow the neo-fascist occupation government to cross the red lines and encroach on our people and our sanctities.”

Palestine Authority Chairman Mahmud Abbas also condemned the visit. But no one took him serious as he has become an Israeli puppet killing his own people on the request of Israel and brutally oppressing Palestinians who rise up to assert their rights and dignity.

Ben-Gvir responded by saying that: “Our government will not surrender to threats from Hamas and those who make threats must be dealt with an iron fist.”

East Jerusalem and Masjid Al Aqsa were brought under Israeli control in the June 1967 war of aggression against neighboring Egypt, Jordan, Syria and Lebanon.  Jewish prayer at the site has been forbidden, though   Jews have frequently prayed there under strict security in recent years.

As a site that carries religious and national significance, Palestinians are alert to any attempts to change the status quo of Al-Aqsa though the Arab dictators in the entire Middle East abandoned Palestinians, Masjid Al Aqsa and Islam to please their US-European masters who fund them with their tax payer’s money.

The increased number of ultranationalist Jews entering the compound, and the frequent storming of the site by Israeli security forces, including inside the prayer hall of Al-Aqsa Mosque, has increased Palestinian anger.

The year 2022 witnessed the highest number of violations and incursions into Al-Aqsa Mosque with more than 48,000 Israeli settlers storming the Muslim holy site. Violations included turning the mosque into a military barracks for Israeli army soldiers and having extremist Jewish groups perform Jewish prayers, prostrations, and public Talmudic rituals, chants, singing and dancing inside the mosque’s courtyards, as well as raising Israeli flags.

Confrontations between Israeli security forces and settler groups on one side and Palestinians on the other have occurred numerous times  particularly following storming incidents in Al-Aqsa.

Palestinians see Al-Aqsa as one of the few national symbols that they retain some element of control over. They are, however, fearful of a slow encroachment by Jewish groups akin to what has happened at the Ibrahimi Mosque (Cave of the Patriarchs) in Hebron, where half of the mosque was turned into a synagogue after 1967, which has gradually increased in size.

The Israeli occupation has been killing Palestinians, demolishing their homes and deporting them for decades. It has been Judaising Jerusalem since 1967 and Jordan which controls Al Aqsa administration   has done nothing.

It is common knowledge that the ultimate Zionist goal   is to establish “Greater Israel” that includes the occupied West Bank, East Jerusalem and parts of Egypt, Saudi Arabia, Jordan and Iraq   to create the world super power replacing United States and Europe and demolish Masjid Al Aqsa to build Jewish Temple in its place.

Israel, created on the Palestinian lands for imported  Jews  by means of violence, killings, massacres, genocides, deception, bribe and blackmail ‘is not an entity to help Jews live in peace  with Palestinian and other Arabs.

British colonial power planted Israel in Palestine to destabilize and loot the Muslim Middle East. Israel has the full support of US-Europe and the Arab dictators,

Thus it will continue to desecrate Masjid Al Aqsa until it is demolished and a Jewish Temple is built in its place. Of course Palestinians will shed their blood and sacrifice their lives to protect Masjid Al Aqsa and the dignity of Muslims. However no Arab dictator will come forward to defend Masjid Al Aqsa. 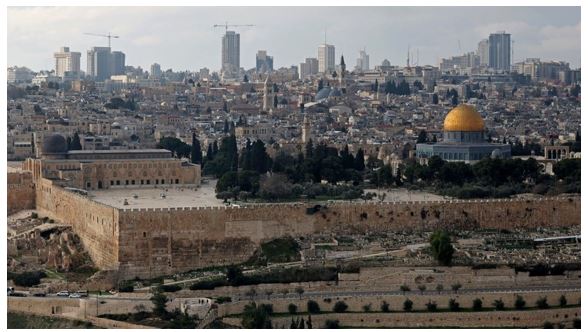 Calling to demolish Masjid and build a Jewish Temple in its place. - Views expressed by writers in this section are their own and do not necessarily reflect Latheefarook.com point-of-view