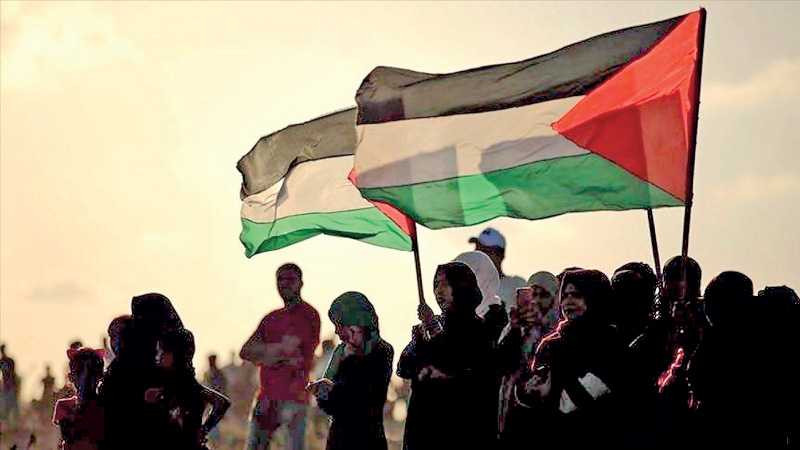 The test of decency, justice and fair play over meanness will pass muster only if Western nations, China, Russia, Japan and India collectively tell Israel that enough is enough

Palestinians will yet again commemorate the Nakba (‘catastrophe’), a term that refers to the ethnic cleansing of Palestine in 1948 and the Palestinians’ loss of their homeland. The mass expulsion of Palestinians was overwhelming in its scope. Arab Palestine was erased and replaced with Jewish Israel. It is estimated that between 750,000 and 900,000 Palestinians were expelled from their homes and became refugees in the aftermath of the 1948 Arab-Israeli War. About 500 villages were destroyed and Palestinian cities were purged of their Arab residents. Only 160,000 Palestinians remained in what became Israel – Dr. Lana Tatour, Adjunct Lecturer at the School of Social Sciences, University of New South Wales

The West as well as Russia and China have looked on with feigned disdain while Israel has continued the dispossession of Palestinians from their own homeland since the creation of the state of Israel in 1948. While the UN has over the years passed several resolutions clearly identifying Israel as the aggressor, and its actions as illegitimate, it has only demonstrated the impotence of the UN, and the triumph of meanness over what is just.

Today, Israel, and the world in deep slumber, looks at rockets fired from Gaza as the cause of a conflict while conveniently overlooking the fact that it is an ongoing reaction to the real cause that began in 1948.

In a wide-ranging article written in 2018, Dr. Lana Tatour (PhD, Politics and International Study), a Palestinian scholar, and an Adjunct Lecturer at the School of Social Sciences, University of New South Wales and specialising in postcolonial/settler colonial studies, indigeneity, and civil society and resistance, Dr. Tatour traces the ongoing humiliation of Palestinians since the mass dispossession that began in 1948.

Dr. Tatour’s article, a history of Palestinian dispossession (https://overland.org.au/previous-issues/nakba70/essay-lana-tatour/) is quoted in full here to give readers a glimpse at this historic debacle heaped upon the Palestinian people by Israel and the world’s economic and military powers. The article begins with insult to injury heaped on the Palestinian people.

“The year 2018 has so far been a good one for the State of Israel, which has just celebrated its 70th anniversary. Yesterday, the US Embassy was transferred from Tel Aviv to Jerusalem following Trump’s unprecedented recognition of Jerusalem as ‘the eternal capital of the Jewish People’.

“Today, Palestinians will yet again commemorate the Nakba (‘catastrophe’), a term that refers to the ethnic cleansing of Palestine in 1948 and the Palestinians’ loss of their homeland. The mass expulsion of Palestinians was overwhelming in its scope. Arab Palestine was erased and replaced with Jewish Israel. It is estimated that between 750,000 and 900,000 Palestinians were expelled from their homes and became refugees in the aftermath of the 1948 Arab-Israeli War. About 500 villages were destroyed and Palestinian cities were purged of their Arab residents. Only 160,000 Palestinians remained in what became Israel.

“But Nakba Day is as much about the present as it is about the past. The Nakba is an ongoing national and personal tragedy. Generations of Palestinians have been born into destitution, statelessness and occupation, and Palestinian claims to self-determination and sovereignty continue to be curtailed by Israel and the international community.

“It is increasingly apparent that Israel’s occupation of the Palestinian territories is not a temporary situation but rather a permanent one. Israel has yet to give up its aspirations for a Greater Israel and the takeover of Palestinian land, with Jewish settlements continuing to proliferate and expand. The illusion of temporality enables Israel to seize Palestinian land while engaging in a futile peace process as a strategy to stall for time and make facts on the ground.

“Since the occupation of the West Bank in June 1967, Israel has established more than 160 settlements there in violation of international law. Today, between 600,000 and 750,000 Jews – 10% of Israel’s Jewish population – live in settlements in the West Bank and East Jerusalem.

“Occupied East Jerusalem is gradually being ethnically cleansed of its Palestinian inhabitants. Since 1967, Israel has revoked the residency status of at least 14,959 Palestinian Jerusalemites. These people are now criminalised and banned permanently from living in their native city. In addition, for more than a decade, Israel has prohibited the movement of Palestinians between the West Bank and the Gaza Strip, cementing the geographical divide between the two.

“The United Nations has described Israel’s policies in the West Bank as ‘creeping annexation’, and Israeli ministers have begun publicly calling for the annexation of parts of the West Bank. Under the Oslo Accords, the West Bank was divided into three areas: Area A (under Palestinian control), Area B (under Israeli and Palestinian control) and Area C (under full Israeli civil and military control). According to the agreement, Area C – which constitutes 60% of the West Bank – was supposed to be transferred to the Palestinians at a later stage, but this never happened. Instead, in recent years Israel has escalated its land grab and population transfer policies in Area C and Jewish settlements have undergone significant expansion.

“According to the Israeli human rights organisation B’Tselem, Israel now has effective ownership of the majority of land in Area C. Further, while Israel has been building an average of 1500 homes for Jewish settlers every year, only 33 building permits for Palestinians were approved by Israel in Area C between 2010 and 2014. None were approved in 2015. Dozens of Palestinian communities in the Jordan Valley and the South Hebron Hills are today facing forced transfer. They are subjected to daily violence by the Israeli army and Jewish settlers. Israel’s policy is to make Palestinian life unbearable. Palestinian villages are denied access to basic services such as water and electricity, and Israel forbids building schools and health clinics. Water tanks and hundreds of EU-funded structures (including modular homes and schools) have been demolished in recent years, in what the EU has described as a violation of international law.

“Colonial policies of dispossession and ethnic cleansing also extend to the Palestinian citizens of Israel. As a result of massive expropriation of land and state policies of Judaisation, Palestinian land ownership in Israel is estimated to be only 3.5%. A major internal colonial frontier is now the Naqab (or Negev, the southern region of Israel/Palestine), where the Palestinian Bedouin indigenous population faces state plans that threaten the destruction of about 40 villages and the forced transfer of tens of thousands of Bedouin citizens of Israel to state-planned townships – the Israeli equivalent of reservations. Last month, the Bedouin village of Al-Araqib, which has become a symbol of Bedouin resistance, was demolished for the 127th time. The Bedouin village of Umm al-Hiran will be demolished next month and the new Jewish settlement of Hiran will be built on its rubble. Adalah, the legal centre for Arab minority rights in Israel, has described Israel’s plan for Umm al-Hiran as being ‘reminiscent of the darkest of regimes such as apartheid-era South Africa’.

“The Israeli regime is one based on racial distinction and racial hierarchy in the treatment of Palestinians and Jews. As Ahmad Tibi, a Palestinian member of the Knesset (the Israeli Parliament), once commented, ‘Israel is democratic for Jews, but Jewish for Arabs’. The legal system and the administrative and bureaucratic apparatus work to facilitate Jewish privilege in all areas of life.

“The human rights organisation Adalah has documented more than 60 laws that discriminate against the Palestinian citizens of Israel and limit their political, civil, socio-economic, cultural, land and due process rights.

“Only a few days ago, the Knesset, Israel’s parliament, passed on first reading the new and controversial Nationality Law, which formally enshrines Israel as the nation-state of the Jewish people. The law legalises the establishment of Jewish-only settlements and rescinds the formal status of the Arabic language as an official language of the state. In reality, this law is not news. It merely consecrates the existing reality of the Palestinian citizens of Israel. More fundamentally, the law encapsulates the Zionist viewpoint that Jews – wherever they are in the world – are the only rightful owners of the land and the only population in the state that is entitled to self-determination, while Palestinians are portrayed as aliens in their own homeland.

“The two-state solution is dead (arguably, it was never really an option). It is time to recognise that we already are in a one-state condition.

“Israel exercises sovereignty over the whole of historical Palestine and it governs the entire population in this territory, Palestinian and Jew alike. And yet Israel operates multiple regimes of citizenship, rights and control. While the Jewish population enjoys political and civil rights, the vast majority of Palestinians are denied those same rights. Even Jews in the diaspora enjoy more rights to the land than do the Palestinians who actually live in their homeland or were expelled from it 70 years ago.

“For decades, Israel has enjoyed impunity for its violations of international law and human rights. It should be apparent that a state that removes Palestinians from their homes in order to build settlements for Jews is a settler-colonial state. A state that denies political and civil rights to Arabs because they are Arabs is a racial state. A state that shoots unarmed civilian protesters who are under illegal and inhumane siege is a criminal state.”

The following concluding remarks in Dr. Tatour’s article presents the essence of the cause that has been boiling since 1948, and which periodically releases reactions in the form of rockets from Gaza:

“For many in the West, the dispossession and continued exile of Palestinians is still seen as a legitimate price to pay for sustaining the Jewish state. A century has passed since the Balfour Declaration, which recognised Jewish nationalism while referring to Arabs as nationless ‘non-Jewish communities’ in Palestine. Palestinians are still struggling to be acknowledged as natural subjects of rights to freedom and self-determination. If anything, the recent protests (the Marches of Return) in the besieged Gaza Strip – where 70% of inhabitants are refugees – demonstrate that the quest for dignity and for the right of return is at the heart of the Palestinian struggle.”

Dr. Tatour presents the solution that will end this dispossession and humiliation of Palestinians and an end to the rocket barrage that is fired from Gaza: “The time has come to pursue a democratic, de-colonised and de-racialised state in historical Palestine – a state that will guarantee full equality to the whole of its population (Jews, Palestinians, immigrants, refugees and asylum seekers). It is time for Palestinians to demand ‘one person, one vote’. And it is time for the international community to support this just demand.”

The test of decency, justice and fair play over meanness will pass muster only if Western nations, China, Russia, Japan and India collectively tell Israel that enough is enough and supports a solution on the lines proposed by Dr. Tatour. If not, it would be conclusively clear that the mean have inherited the Earth.

Disclaimer: Palestinian dispossession continues unabated; the mean have inherited the Earth? - Views expressed by writers in this section are their own and do not necessarily reflect Latheefarook.com point-of-view