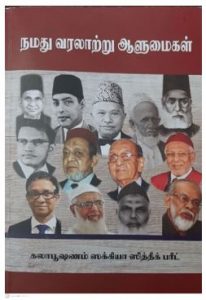 Few months ago during a conversation with well-known educationist Mohamed Nahya, former member of Public Service Commission and now a member of Right to Information, RIT, we emphasised the need to compile a book on prominent Muslim personalities.

This was extremely important especially in view of the community’s fast fading interest on the need to record the contributions of our brothers and sisters. Failure to do so means we lose our own history.

Few weeks later we were delighted to read reports of an enterprising educationist undertaking and completing this task which by all means not an easy one as, I know as a journalist, the difficulties involved in gathering information.

Tribute should be paid to her for completing this task despite her age, 75 years, and ailments often common to her age. She was ably 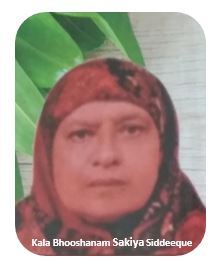 assisted by her brother and well known activist Hilru Siddeeq. The author has dedicated the book to her brother for his support and the Muslim corona victims.

She has divided the book into different sections such as philanthropists, intellectuals, educationists, religious scholars, politicians, and far sighted traders, self-made people who came up on their own efforts, doctors, lawyers, journalists and those who contributed to arts, literature and music.

The author has given brief accounts of these people and suggested that those who are interested in detail accounts could do more research and gather information before the people involved disappear with the invaluable information they possess.

As pointed out in his preface to the book by Muslim Cultural Department Director Ibrahim Ansar “this is not a book to be read and set aside, but a historic document to preserve for generations as it speaks about people who contributed in their own fields.

Disclaimer: Book on Prominent Muslim Personalities. - Views expressed by writers in this section are their own and do not necessarily reflect Latheefarook.com point-of-view