Soft spoken and mild mannered my dear friend Mahinda Jayaweera’s book  “ FRAGRANCE STILL LINGERS” takes   us back to days of sweet memories of our late teenage or early twenties  which lingers in our minds rest of our lives despite changes     in the subsequent years.

We all have sweet memories of our early   care free days   which remain ever green in our heart rest of our lives. Mahinda Jayaweera’s Fragrance Still lingers is one such book which has won the hearts of journalist to professional and academics.

I first met Mahinda in the early 1970s when I went to interview for Daily News then Chairman of Ceylon Tourist Board Mr Dharmasiri Senanayake.  Mahinda Jayaweera was his secretary and obviously I had to meet him first before meeting Mr Senanayake.

It was this meeting which became instant friendship before blooming into sincere and very close friendship which last today.  Molded in Buddhist teachings Mahinda, in his book “FRAGRANCE STILL LINGERS”, reflect and revive the Sinhala customs, traditions, values and life style of the peaceful era of   1950s and 60s in this Paradise Island.

These values were reflected in the comments made on his book by respected journalists, professors and other academics.  Here are some of the tributes made by such people;

Mahinda Jayaweera invigorates the reader with the fragrances and enchantment of a Sri Lanka now decades past in this engrossing novel that could be described as   rising to new qualitative heights as a Local Period Novel. While the story line in “Fragrance Still Lingers” is deeply engaging in itself, the evocation of Sri Lanka’s traditional values and cultures, along with the novelist’s lyrical descriptions of the country’s scenic splendor, besides the insights he provides   into the intimate beauty of Sri Lanka’s people, render this novel a most memorable read.

This book is at once, an enchanting story of   love as well as a sociological and historical tract replete   with a multitude of insights for those engaged in these vital disciplines.

Mahinda Jayaweera’s latest novel Fragrance Still Lingers deftly puts into play two levels of human emotions. At one level they are clearly universal and transcendal.In that they rise above the boundaries of time and space. They are deeply determined by culture, and  emotion .Mahindra Jayaweera is keen to explore the possibilities of the local language of human emotions. The interplay between these two invests the text with a depth of meaning and allows him to pursue that goal sensitively. 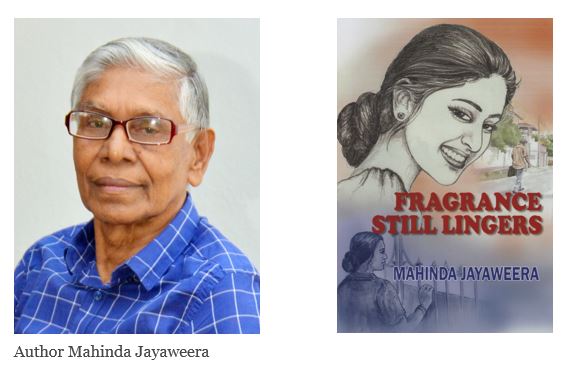 Though the book revolves around an implicit romantic relationship between two young people, I also see as a sociologist, a much broader and deeper story here as it deals with the lived experience of several important segments of Sri Lankan during this significant period.

The details accounts of places, people, events and social and cultural practices that the author provides throughout the book are sure to generate great interest and curiosity among readers who are often exposed to simplified versions of the transition from the past to the present, colonial rule to self-rule or westernization to indigenization.

A worthy reading for present generation - Views expressed by writers in this section are their own and do not necessarily reflect Latheefarook.com point-of-view