In a video interview with CHAMUDITHA early December 2020, Dr Nihal Abeysinghe, Senior Government Virologist and Epidemiologist explained that corona Virus dead bodies could be either buried or cremated .He said there was no question of germs spreading through water in the grave and causing health hazards to the living

This  World Health Organization (WHO)advice was followed by countries all over the world. However Sri Lanka remains hell bent on cremating Muslim corona virus dead dismissing their religious sentiments.

The government claims that its decision was based on the health ministry technical committee advise which does not have a virologist .This was endorsed by Professor Tissa Vitharane  who said there is no virologist in the committee set up to deal with this issue. 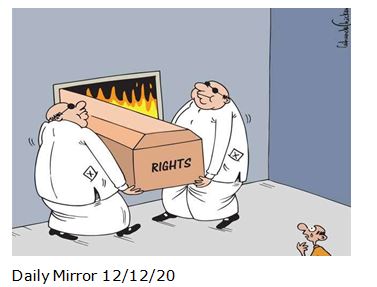 Prof Vitharane, a specialist in the fields of bacteriology and virology ,was not in the committee.

The question is how a committee, without a virologist, advise the government on this extremely sensitive issue without realizing the consequences.

To Muslims worldwide burying their dead bodies is a religious duty and Islam has told how it should be done. To a Muslim death means the end of life in this world and the beginning of life in the hereafter.

Up to now Muslims who died of corona virus were cremated arbitrarily in Sri Lanka while loved ones had no say at all. They were also denied the chance   to do a PCR test in private to confirm the government tests as there were reports in circulation  that many who died natural death were also cremated.

Throughout the country and beyond there were severe critic is against cremating corona dead bodies. Muslims were seething in anger claiming that this policy has nothing to do with health or medical reasons, but to harass Muslims and make them radicalised. Some even suspect that this perhaps may be an effort to provoke those who are believers in their faith.

This matter was taken up in Parliament by both Muslims and non-Muslim members alike appealing to President Gotabhaya Rajapaksa and the government to change this policy. No response from the government.

A team led by former parliamentarian Ali Zahir Moulana took up the issue in the Supreme Court where it was rejected without giving any reason. We citizens are unaware why the Supreme Court rejected the plea of the minorities. We do not know whether the Petitioners’ had not complied with the Court rules when filing Petitions.

In the midst of all these comes the shocking cremation of a 20 day old baby who was admitted to   hospital at 10.45 am on December 7.The baby died at 4.15 pm following day on December 8 and was cremated at 4 pm on December 9. They even failed to inform the parents when the baby died, but was told about the death only when they rang up.

Baby’s father was keen to do a PCR test at a private hospital ,the hospital staff refused and forced the father to sign the paper –perhaps authorizing cremation.

Later they were told to go to Borella cemetery for cremating the body without his consent. When the father asked why this rush to cremate the baby’s body while number of bodies were awaiting cremation there was no response from the doctors and others.

“I have no say and the doctors and others did not even bother to answer my questions but all out to cremate the baby with no human feeling” said the baby’s father in a video interview.

In another video clip in circulation on Wednesday 16 December 2020 a Muslim  complained that his wife died at Kalubowila Hospital and was not allowed for him and his children to see the body and not allowed to do a PCR test in private. They were only adamant demanding his signature for cremation.

Meanwhile the cremation of the 20 day old baby was given wide publicity  worldwide especially in Muslim countries, the most sincere friends of Sri Lanka and helped the island in times of crisis. In the gulf countries baby’s posters were displayed in vehicles. These are countries from where a million Sri Lankans are sending for the economic survival of our debt ridden country US $ 20 million EVERY SINGLE DAY, on an average!

Since the end of the ethnic war the government has abandoned Muslim countries and established close ties with violently anti-Muslim countries such as America, India, Israel and China and suspected to be implementing their evil agendas against the island’s Muslims. What the so called racist patriots who divided communities and destroyed communal harmony fail to understand is that these countries are here with their own agenda.

Their common agenda is to promote hatred towards Islam and violence against Muslims and divide communities in the island.

This is the reason why many fear that Sinhala Buddhist theocratic government will not work in a multi-racial, multi religious, multi linguistic, multi-cultural country like Sri Lanka. Our neighbor India under RSS front BJP is a classic example where all opposition parties have got together to defeat the BJP Hindu tv a forces which brought nothing but disaster to India.

It is common knowledge  that the island’s Muslim community, the most peaceful of the three communities and suffered a great deal during the 30 year ethnic war, has been subjected to  violent persecution causing  immense suffering ever since the end of the ethnic war in May 2009.

Their residential and commercial establishments were burnt, mosques  attacked and desecrated and demonized. Racist thugs were given free hand to terrorize the Muslim community with government patronage .This included Buddhist monks who instigated the organized carnage at Aluthgama, Beruwala and Dharga Town. Didn’t these acts of violence against Muslims lead some misguided elements to cause the shocking Easter Sunday attacks? We are anxiously awaiting the report of the Presidential Commission Of Inquiry for the answers.

Fed up of  violence and lawlessness Muslims joined others and  voted Maithiripala Sirisena-Ranil Wickremasinghe team to power, only to realize they were no better, when the anti-Muslim violence continued climaxing in the Easter Sunday massacre exploited to demonize Islam and unleash  violence on the community besides burning and destroying properties.

Almost a year and eight months later today truth began to unfold showing the Muslim community had nothing to do with the Easter Sunday Massacre, but a suspected conspiracy for political gains.
In the midst comes the unbearable cremation of Muslim corona dead. And worse for no logical scientific reasons. Some think that the 1.6 billion Muslims are all fools merely because their leaders are dealers and can be bought over.

What many have forgotten is that if not for the Muslims, mainly from the North and the East, steadfastly supporting the government during the three decades of ethnic war, Sri Lankan would have been divided two decades ago.

Sri Lanka does not belong to one community. It belongs to all.

One should not forget that it was racist politics of   the majority community turned Sri Lanka, a shining example for the entire third world during the time of its independence in 1948 for political and economic stability, communal harmony, into  one of the most corrupt and bankrupt countries in the world today.

Meanwhile, a silent protest got underway in Colombo where white handkerchiefs and cloth were tied outside the cemeteries, protesting the mandatory cremation only policy and remembering those victims who were forcefully cremated.

When will the leaders of this country understand that Sri Lanka is getting increasingly isolated from the rest of the world? Can we live like frogs in a well?

Disclaimer: Cremating Muslim corona dead bodies Sri Lanka is right - Whole world is wrong By Latheef Farook - Views expressed by writers in this section are their own and do not necessarily reflect Latheefarook.com point-of-view