The lands that were given up voluntarily by the residents were those used for livelihood, agriculture and residential purposes

According to the residents, 21.5 acres of land was taken from them

Gazette 2216/38 on February 25 revoked the forced cremations policy for COVID-19 deceased and allowed burials. It was in early March 2021 that the COVID-19 deceased were buried in Majma Nagar, Oddamavadi. Since then every COVID-19 deceased, who is to be buried, is taken to the Majma Nagar where 10 acres of land has been allocated for the purpose of burying those who have succumbed to COVID-19. The lands that were given up voluntarily by the residents were those used for livelihood, agriculture and residential purposes. Currently over 3200 bodies are buried in Majma Nagar and local authorities have informed that only 300 bodies can be accommodated further; given the space available in the current land area. If more bodies are to be accommodated, the buffer zone would be extended, and more lands would have to be given up.

“Initially, we showed the authorities a public land that is across the current burial area, but the authorities did not want to have the COVID-19 burials there due to it being located on a slope and instead wanted the land across which belonged to M.S. Jawfer,” stated A.L Sameem, the President of the Rural Development Society of Majma Nagar. Jawfer had immediately agreed to give his 3-acre land to be used for COVID-19 burial purposes.

Along with Jawfer, 13 other landowners had to give up their lands for state purposes. According to the residents, 21.5 acres of land was taken from them. 10 acres were allocated for COVID-19 burials and 11.5 acres were allocated to be used as a public cemetery for the community as the area residents did not have a public cemetery. “We are happy to give up our lands, but we need an alternative solution because we need lands to carry out our livelihood and to also live,” shared Jawfer.

H.M. Husain, who was displaced due to the civil war, was resettled in Majma Nagar and had been living on the land for over a decade, but he had to give up his land as it was in the buffer zone surrounding the COVID-19 burial ground. Husain was not compensated for the land he had lost and currently, he does not have a place to live.
“That was the only land I owned and I built my house there, but I had to give it up because it was in the buffer zone. I lost my house and my land,” lamented Husain.

-A.L Sameem, the President of the Rural Development Society

High population density in the area

We are happy to give up on our lands, but we need an alternative solution because we need lands to carry out our livelihood and to also live

The residents were also concerned about the future generations as the land area was already scarce for the current population. They had also requested for lands from the Divisional Secretariat. But the Secretariat had informed that there was no state land to give to these residents. Sameem also informed that 90% of the residents represented those who were displaced from the war and were resettled in Oddamavadi and that these residents haven’t received the permits for the lands in Oddamavadi. “Over the years we have spoken to many state officials, but we have not received the permits yet,” he said.The right to bury loved ones
When questioned as to why the residents gave their lands, Jawfer responded that he had given the land, so that the COVID-19 burial process would not be delayed further. “I am a Muslim too. I understand how important it is to bury the dead in our religion and other religions as well. It was after a long continuous effort we, Sri Lankans got the right to bury our loved ones who had succumbed to COVID-19, I did not want to delay the right any further causing anguish to any fellow Sri Lankan,” he shared.

He also noted that prior to the authorities selecting Majma Nagar in Oddamavadi as the area to bury COVID-19 deceased, the authorities had wanted to allocate areas in Thalaimannar and Iranaithivu where the residents had protested against burying of COVID-19 deceased in the area. Therefore, the residents of Majma Nagar didn’t want to delay the burial process further and agreed to give up on their lands even though the land area was already scarce for the population.

That was the only land I owned and I built my house there, but I had to give it up because it was in the buffer zone. I lost my house and my land 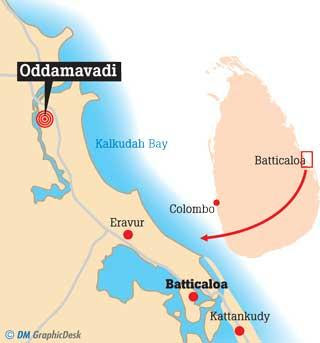 “We don’t have any issues in giving up on our lands, but we want a solution for the lands we lost. We need lands to live, to cultivate, to carry out our livelihood work. That’s why we are requesting from the state to give us lands for these purposes,” stated Sameem.

Demands for burial grounds in each province
The residents were also of the opinion that the state should look into having COVID-19 burial grounds in every province. They opined that COVID-19 burials have been taking place for the past 8 months and even those who have been carrying out the burial process have not been infected with COVID-19. “Globally, they bury COVID-19 deceased in the public cemeteries. It is only in Sri Lanka where we have a designated an area to bury the COVID-19 deceased. It would be easier for everyone if there was an area in every province to bury the COVID-19 deceased from the province,” Sameem remarked.

He observed how the family of the deceased has to travel a long distance from various parts of the island to Oddamavadi for the burial of their loved ones. The family does not get to be a part of the burial process or even see the remains. “The family is already grieving, and they have to complete a long cumbersome journey here. If the burial area was closer to where the family lives, then they could even revisit the graves in remembrance of their loved ones. When it is far, even revisiting is hard,” he opined. He also noted that the burial area could only further accommodate 300 bodies and to extend the area would mean more residents would lose their lands and the population density would increase further.

Sameem and Jawfer shared that people of various faiths were buried in the area; not only those of the Islamic faith. The burials are done with the help of the local area residents and the military; who carry out the necessary rituals. They also shared that the public cannot access the burial area and only those involved in the burial process and those possessing a Pradeshiya Sabha pass can enter the burial area.

Political situation
Residents claim that certain politicians from the area are capitalising on the situation to strengthen their voter base. “Politicians like to keep Majma Nagar as the only COVID-19 burial area, so that they can say they facilitated the COVID-19 burial process and get more votes,” revealed Sameem. There are reports of certain politicians who have stated that they were instrumental in ensuring the burial of the COVID-19 dead and allocating the area for burial.

“It was the people’s own doing. None of the politicians did anything even though they pretend to have done so. We gave up on our lands to ensure all Sri Lankans had their dignified right to burial, but now we are without lands. We would have given more lands if we had, but we don’t have any more lands to give,” stated Jawfer.

Disclaimer: Double trouble in city of burial Focus on Oddamavadi - Views expressed by writers in this section are their own and do not necessarily reflect Latheefarook.com point-of-view