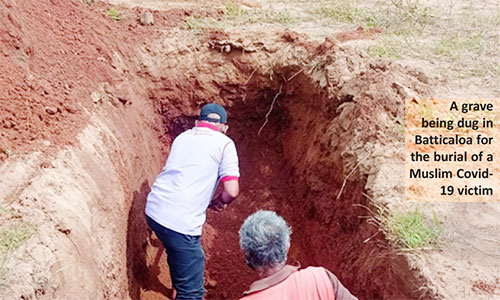 I am glad the saga of forced cremations is now over, but I fear the way it was handled has left a lasting residue of bitterness. And its handling was extraordinarily sad, in that it also led to unnecessary humiliation for the Prime Minister. I don’t suppose anyone thinks of him as being in a position of great strength any longer, but that does not matter so long as he is treated with the respect that is his due. To find Ministers who owed everything to him contradicting him embarrassingly is harrowing.

It may seem odd my standing up for him, but that is something I have done consistently now for well over six years. I did come out against him at the 2015 Presidential election, but that was for reasons I recorded in a letter to him well before he called the election. And I have no doubt he now realizes how badly he treated me because of tales carried to him by those who have had no qualms about attacking him when they thought he was down. Wimal Weerawansa used to describe me as a creature of NGOs, when I was the most efficient at controlling those that were hostile to the Sri Lankan state even while I urged working together with those – and the principal UN officers – who were only trying to help.

Even worse, Sajin Vass Gunawardena would call me the TNA representative on the government team to negotiate with them, and effectively scuttled the compromises I reached with the TNA, to the resentment of their extremist elements. So that opportunity, to reach a political settlement that did not threaten anyone, was frittered away.

But while I have no regrets about not having supported him to be re-elected in 2015, for those neanderthal forces would have been stronger, I do regret the appalling behaviour of the government that followed. I tried to argue against the politics of retribution, but that was all the leading figures then could think of. That viciousness contributed to Mahinda Rajapaksa coming back in force, to lead the UPFA campaign in 2015 and then the SLPP one in 2018.

But he was humiliated in both those years, by Sirisena who pulled the rug out from under his feet (and his own too as he later discovered) when he betrayed the UPFA at the 2015 General Election; and later when Sirisena foolishly dissolved Parliament after having asked Mahinda to be Prime Minister and then turning away crossovers who would have given him a parliamentary majority. There were others too who were responsible for that ridiculous reaction, asking relatively decent Muslim MPs to come back with their thoroughly indecent leaders, but there is no point in going over that now. But Sirisena and those he came to rely on should have thought about safeguarding Mahinda after he accepted the post of Prime Minister.

That was unnecessary humiliation for someone who rid us of terrorism. So it was very necessary, to make it clear that he was still respected, that though he could not stand for President again he was made Prime Minister again when the opportunity arose. That set the seal on his political resurrection.

After that I have no doubt that he might want to retire soon. But the fact remains that he still understands politics, better I suspect than the current President though I, like many, thought Gotabhaya would be better at taking the hard decisions this country needs.

The latter hope has not been fulfilled. And it was thus very disappointing, when Mahinda noted that burials would be allowed, that those with nothing like his understanding of the world contradicted him and that the President did not make it clear that Mahinda’s word had to be respected. Though Mr Athaullah, the most balanced of the Muslim Ministers in the previous Rajapaksa government, said helpfully that both the President and the Prime Minister were ‘amenable’ to burials, there was no sign of this earlier.

When Covid first struck, the decision to enforce cremation for its victims was understandable since no one was quite sure whether burial could be dangerous. But with all expert opinion holding that this was not the case, it is a great pity that the government did not change the policy earlier. And that it did so only after concerted criticism from many of our good friends in the Organization of Islamic Countries seems to me as great a humiliation as was inflicted on the Prime Minister; not least because Imran Khan had actually thanked him for his pronouncement, so that it being countermanded looked even worse.

But once again, as I wrote in my book Declining Sri Lanka about the ridiculous behaviour of the Jayewardene government when it lurched from concession to concession, we have to worry about the manner in which another government reacts to crisis: grant under pressure what should have been acknowledged as a right, grant it so late that the beneficiaries would be amongst the most extreme, and grant it so gracelessly and grudgingly that distrust would inevitably continue.

That particular fiasco gives rise to two worries. The first is that the government will also react to what is going on in Geneva in the same fashion. For 10 years now it has been self-evident what the government should do, deal firmly with falsehoods but also concentrate on positive measures for all Sri Lankans including those who suffered most in the war – through restorative justice not retribution – but there are no signs of this happening. Whether the current problems will lead to a change in direction remains to be seen, and I have no doubt it will be necessary to look at this question again after the vote in Geneva.

But there is another consequence of the humiliation of the Prime Minister which could lead to more complications. Ever since Gotabaya Rajapaksa came to power, there has been much speculation about relations between him and Mahinda. I have not got involved in this because from long ago I believed the relationship between them was very good, and that they each respected the other.

Of course, they both had their view of what was necessary. I recall Mahinda telling me, when I urged him not to have an early election in 2010, that only Gota and I had said this. The implication was that we did not understand politics, unlike his other advisers. And then, after the electoral loss in 2015, Gota told me that he like me had advised Mahinda to have a Provincial Council election soon after the war victory, but Mahinda had preferred to take Basil’s advice, to wait till his development programme had won hearts and minds.

We all know what that resulted in, and I thought then that Gota was perhaps a more shrewd judge of politics than he was given credit for. And his thumping victory in 2019 seemed to substantiate this view, as did his first cabinet. And though I found the host of other Ministers disappointing, I subscribed to the view that these were Mahinda’s men, who had to be rewarded for their loyalty.

But after that I have no idea as to who is calling the shots. And since there is such incoherence, that scarcely matters. When Gota decided not to take steps immediately to get the country going again, which I had thought he would do given his previous achievements, and decided instead to mark time till a General Election, I began to worry. And then as the election had to be postponed, I worried more. And then when the new Cabinet was appointed, without the influx of fresh blood I had anticipated, I switched off.

But now it looks like what I can only characterize as concerted inaction is being accompanied by intense intrigue. Gota I think managed to rise above the controversy created by what seemed Wimal Weerawansa’s attempt to send Mahinda effectively into retirement. I expected no less given the affection I have no doubt still exists. But that is why the wanton insult to Mahinda worries me, because after that I suspect there will be more who will try to rise by pushing against him.

Meanwhile, there seem to be moves to punish political opponents, the rock on which the Yahapalanaya government came to grief. Of course, the leading lights of that government are still pretty much disliked, but the present government should understand that the people prefer prosperity to revenge. There is no sign of that coming, and no sign too of the vast amounts that were plundered being restored. Of course, getting what was stolen back will not cancel the fiscal deficit we are likely to face soon, but it will help.

More importantly it will help to restore confidence in politicians. The current view is that such recovery is avoided because the present bunch in power do not want a similar thing to happen to them. So, the general impression is that all governments are full of plunderers and there is no hope of justice let alone restitution of public property.

And if this is accompanied by punitive action with regard to the Easter Sunday bombs being directed to the politicians who failed to prevent it instead of the perpetrators, the public at large will be in despair. Those responsible for security who failed in their responsibilities have enough to answer for in other respects, and if they are compelled to make restitution for the financial losses the country suffered during their period in power, that will be punishment enough. Anything else will be seen as fulfilment of personal agendas, not the country’s requirement.

Disclaimer: An unnecessary humiliation By Prof. Rajiva Wijesinha - Views expressed by writers in this section are their own and do not necessarily reflect Latheefarook.com point-of-view