The legitimate cry of the Catholic community demanding the expediting of the investigations into the Easter Sunday attacks and identification of the mastermind has set off ripples, or more appropriately waves, in political circles.

The continuing agitation by the Catholic community for justice sparked of a full scale attack on the Cardinal by three hard-line organisations that came forward to make a resolute defence of the Government. The Bodu Bala Sena, the Sinhala Ravaya and the Sinhale Organisation took umbrage at the Cardinal’s plea for expediting investigations into the attack that cost nearly three hundred lives.

The actions of the three organisations and the implications of their attack on the Cardinal were discussed in this column dated September 12, 2021 under the headline “Dark clouds emerging to threaten National Unity.”

The column went on to point out as follows: “What is totally unacceptable, however, is the tone and content of their attacks on the Cardinal and the Bishops. Expression of difference of opinion on a matter is acceptable when conveyed in civilised language. This was hardly the case at the three media conferences held to criticise the Catholics’ plea for justice.”

“It is an accepted norm in the civilised world including in Sri Lanka that religious teachings, religious founders and religious teachers are referred to with respect. This degree of respectful conduct which is part of the Sri Lankan heritage was totally absent at these media briefings and could give rise to disappointment and anguish among the followers of the respective religions.”

The Secretary of the Bodu Bala Sena, Venerable Gnanasara Thero, continued in the way he is want to do when he appeared in three TV programmes last week. At these TV talk shows he went on to speak in the same disparaging tone and make wild allegations against the Muslims. For the venerable Thero whose mission in life seems to be spewing hate against the Muslims this was not new, although, as in the case of his many other utterances his comments would have attracted the provisions of the law against hate speech. However that could only happen in a set up where justice is dispensed without fear or favour.

What was new in his utterances was his warning in the Salakuna programme on Hiru TV on September 20. On this programme he spoke of the likelihood of another terrorist attack, and that he knew all details of it including the people involved.

These comments by the venerable monk had its sequence in Parliament last Wednesday when Samagi Jana Balawegaya (SJB) Parliamentarian Mujibur Rahman raised the matter.

The SJB legislator asked Public Security Minister Sarath Weerasekera the following question: “Ven. Gnanasara has recently made a statement during a live telecast on Hiru TV that there will be another terror attack. He said he informed the President of the threat. He also said that he has all information including the details of the explosives and where the attack will take place. What action has the Government taken?” (Island issue of September 24, 2021)

The Parliamentarian also pointed out that such a serious statement would have an adverse effect on the country at a time when the Government was inviting investments and promoting the arrival of tourists into the country. 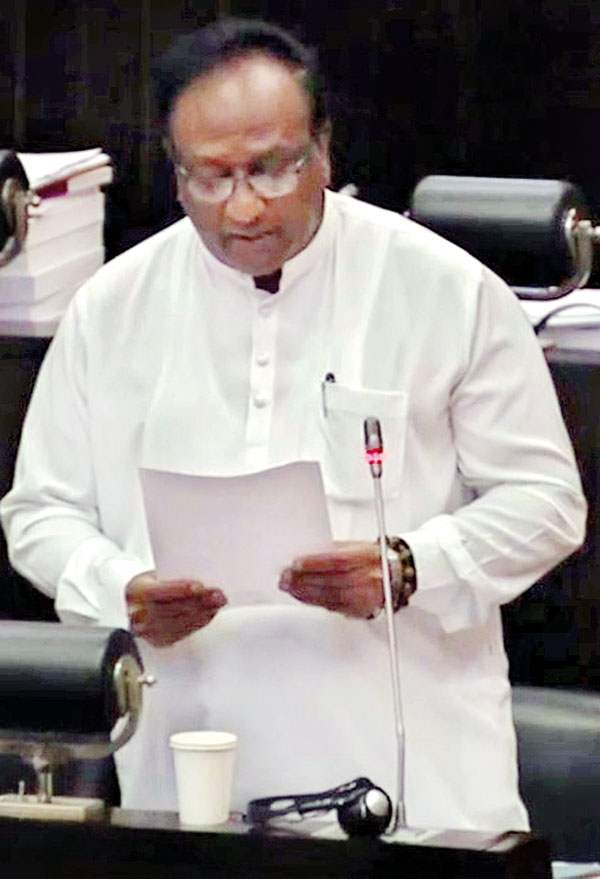 Minister Sarath Weerasekera: Portrays Muslims in a negative light in response to an SJB parliamentarian’s question

Responding to the question, Minister Weerasekera said that inquiries had been made from the venerable monk although he did not confirm that a statement had been recorded. He confirmed that no arrests had been made.

To the query whether investigations had begun pursuant to the disclosure of the venerable monk, his response was that the matters mentioned by him were part of ongoing investigations.

But what was worrying and having more serious implications were the comments made by the Public Security Minister in his statement which gave an insight into his perception of the Muslim community. In the absence of any contrary view expressed by any other Minister one has to assume that these views are shared by other ministers and the Government.

The Minister’s statement is an eye opener and should be studied closely to understand the thinking behind many of the Government’s actions.

The contents of the Parliamentary response are too long to be discussed here but a few of the points made by the Minister would suffice to get a glimpse of the contents and tenor of his response.

According to the Minister:

When questioned, the venerable monk had said that he had made the statements about terrorism and conspiracy on the basis of his understanding of what was in the Quran and his view that those who believed in them could launch attacks at any time.

The ideology of the Islamic state and Wahabism was what drove people to terrorism.

There could be many people in the country who believed in such an ideology.

If Wahabism and ISIS ideologies are based on the teachings in religious books, such teachings should be removed from such books.

If the one country, one law concept is to have any meaning, there cannot be different laws for different religions. Those laws are the ones that promote and give rise to such ideologies.

The venerable monk has been constantly warning of such threats arising from such ideologies for which he has been wrongly accused of creating communal tensions. On the contrary the venerable monk should be thanked for creating the necessary awareness.

The ISIS ideology could be in the minds of any Muslim youth.

Those who were detained after the Easter attack are people who believe in these ideologies.

The statement of the Minister has several implications that cannot all be discussed in the short space of this column. His portrayal of the Muslim community in a negative light in his capacity as the Minister in charge of the Police can give the wrong message to Police personnel who can be wrongly influenced in their dealings with members of the Muslim community. It can create wrong perceptions internationally that Sri Lanka is an ISIS hotspot (which it is not) and therefore not a suitable place for investments and tourist travel.

It serves a blow to national unity and reconciliation at a time when all communities need to unite to face the contemporary challenges faced by the country.

It is time that the Government took corrective action to reassure the people that there will be no marginalising of any community. ([email protected])

Disclaimer: Govt. should reassure all communities to make national reconciliation more meaningful - Views expressed by writers in this section are their own and do not necessarily reflect Latheefarook.com point-of-view