The Horrifying / Inhuman April 21st attacks should not be seen merely attack on a specific religion at this time. Rather the attack is on the very heart of the county’s plural, multi-ethnic social fabric. There has been no history of violent animosity between Muslims and Christians. However, over a period of time both communities have been targeted by few radical Buddhists on multiple occasions. They were both victims of the violence but never responded. Had the bombers targeted state institutions, places of entertainment, Buddhist temples or even Hindu kovils, it would have made sense in terms of vengeance for a real or imagined wrong.

Sri Lanka’s Muslim community which suffered immense during the three decades of ethnic conflict and help save the unity of the country is deeply disturbed in view of the   involvement of an insignificant Muslim group in the devastating April 21 attacks.

The alleged involvement of National Thowheeth Jama’ath (NTJ) and the media coverage started causing serious concern among Muslims who were already under attack by racist mercenaries.  Without any provocations Muslims were attacked, looted and their properties including mosques were burnt causing billions of rupees of lost depriving their livelihood during attacks in Central hills in March 2018.

These attacks remain fresh in their minds though the perpetrators were yet to be tried and brought to book. One of leaders of this carnage was released when former President Mahinda Rajapaksa was sworn in as prime minister. This is the state of affairs in the country where Muslims feel ignored and discriminated by the pro-western Maithri-Ranil government.

There are clearly external interests working in collusion with local political actors in order to divide, distract, rule and advance external geo-strategic interests in this strategically located country at this time. External parties have geopolitical interests in Sri Lanka to divide, distract, loot and set up military bases in the island as there is a cold war and increasing militarization of the Indian Ocean.  RSS and BBS emerged in the post-war period, the former a Hindu organization and the latter a Buddhist outfit in the predominantly Tamil northeast and Sinhala Buddhist South, seemingly also targeting Muslims and Christians.

On the other hand how come the Indian media and even Indian politicians knew more about bombings than the local media and local authorities? Furthermore, the intelligence shared by Indian RAW with the Sri Lankan authorities about possible attacks almost two weeks before the incident / release of identities of the Suspects and their ideologies gives credence to the suspected role of Indians deep state . It is also noticeable that if the attackers successfully targeted renowned Catholic Churches why they did not attack Indian High Commission which was also target of the terrorists.

This reprehensible crime cannot be done by handful of undesirables from Dematagoda or Sarikamulla as it proved a very well coordinated sophisticated crime meticulously planned and executed within 20 minutes. The authorities have pinned the blame for the attack on an obscure group “National Thowheed Jamaath (NTJ). The group has multiple links to foreign countries. The links to foreign countries appears to hold the key to determining who is really behind the attacks. Therefore, due to NTJ’s foreign links, it is highly likely that a foreign entity, most likely a foreign state or state intelligence agency was behind the attacks and that the men on the ground who have been captured are merely pawns in a much larger and even more dangerous game.

Questions were also raised why the government failed to act promptly and to stop the attacks thus could have saved innocent lives. That is the first thing that any responsible government would do as innocent peoples’ lives were involved.

President Sirisena was to appoint a special investigating panel to ascertain information on this carnage while Prime Minister Ranil Wickremesinghe   said investigations would be launched to ascertain why a prior warning about the attack had been ignored.

Shameful state of affairs was such that Minister Harin Fernando tweeted the image of an internal memo and report by the police intelligence of a terror attack to be carried out by so called NTJ.

“Some intelligence officers were aware of this incidence. Therefore there was a delay in action. What my father heard was also from an intelligence officer. Serious action need to be taken as to why this warning was ignored. I was in Badulla last night,” the minister tweeted.

The letter titled “Information of an alleged plan attack” said the state intelligence services had received information from a foreign intelligence service to the effect that National Thawheed Jamath Leader Mohammed Zahran was about to launch a suicide bomb attack in Sri Lanka targeting famous catholic churches and the Indian High Commission.

In the letter, the DIG requested the concerned authorities to pay attention to the information and to beef up the security provided to VIP personnel and to the locations.

Government spokesman Rajitha Senaratne told reporters that there had been “several warnings from foreign intelligence agencies about the impending attacks”.

Such a calamity was not something unexpected. About eight months ago in October last year I highlighted a potential threat to communal harmony   in an article. This is what I predicted;

“The island’s growing ties with Israel have become cause for serious concern among the discriminated Muslim community which always feared that this may spell disaster for communal harmony in view of Israel’s centuries old vicious hostility towards Islam and Muslims. This fear emanates from Israel’s long record of hostility towards Muslims and its crucial role in the United States led western global campaign demonising Islam and Muslims under the guise of fighting a   war on terrorism. Today it is  common knowledge that Israel and India under Prime Minister Narendra Modi’s BJP’ / RSS, operate hand in glove against  Muslims in India and the region as well.

Knowledgeable people were aware that Israel was behind all attacks in Europe during the past three decades and the western media, part of US-European-Israeli war machine, put the blame on Muslims only to be proved months later that they were the work of Israeli intelligence agency, Mossad. In the same way RSS has been responsible for thousands of violent attacks on Muslims since Indian independent burning Muslim villages and cities, killing Muslims and raping Muslim women.

Israel and India fully backed by US and Europe has lot to benefit by destabilising the island which has established closer ties with china especially in the context of US –China rivalry in the Indian Ocean region. From the very first hour western media began their traditional role of accusing Muslims of committing this crime.

Muslim community of the Island has vehemently condemned this massacre and issued a statement signed by prominent Muslims. Following is the statement;

“We convey our deepest and heartfelt sympathies to the families of all the victims of the heinous terrorist act which took place on Easter Sunday. We also convey our utmost disgust, revulsion and sorrow at the unexpected and totally unnecessary and unacceptable loss of life and injury to our fellow Sri Lankans and visitors to Sri Lanka, several of who were engaged in prayer.

We are aghast and saddened by the fact these acts were carried out by an insignificant group of misguided Sri Lankan Muslims. The actions of these misguided   Muslims in no way represent or reflect the beliefs, concerns and expectations of the Sri Lankan Muslim community which has integrated well into Sri Lankan society over the centuries and contributed to our Motherland. We identify ourselves truly as Sri Lankans and are proud of our Sri Lankan identity.

This heinous incident is a challenge to all Sri Lankans who are dedicated to maintaining our pluralistic values and our common resolve to prevent any cycle of religious and ethnic violence. We Sri Lankan Muslims are equally obligated to infuse our whole community with the true Islamic values of peace and brotherhood. We reiterate our condemnation of this inhuman and despicable act of terror in the strongest possible terms.

We appeal to all our fellow Sri Lankans to act with restraint and desist from taking the law into their own hands. Let us stand united as otherwise we would be yielding to the terrorists. We also call upon all state agencies to effectively investigate these criminal acts and bring the offenders to justice swiftly and effectively”. Ends  23 April 2019 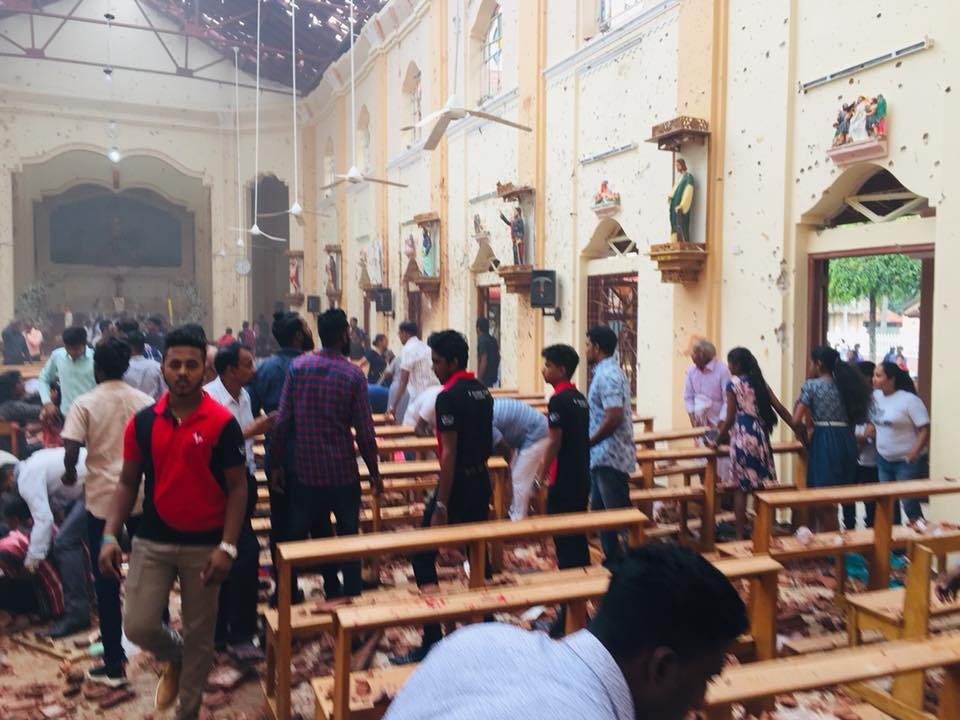 Disclaimer: Who is the mastermind behind the Easter Sunday massacre? Why carnage was not prevented despite prior information? By: Latheef Farook - Views expressed by writers in this section are their own and do not necessarily reflect Latheefarook.com point-of-view