The British daily The Telegraph did some kite-flying last weekend, saying London was considering the open-ended deployment of a contingent of elite special forces to Afghanistan “to provide training to Afghan units and deploy with them on the ground as advisers.”

At the same time, The New York Times reported that the White House had approved General Austin Miller, the top American commander in Afghanistan, staying on at his post for “at least a couple more weeks,” although US troop withdrawal was complete.

Connecting the dots, it appears that the US is trying hard to replace the “forever war” in Afghanistan with a Syria-like hybrid war. The stunning success Russia registered in ensuring the survival of President Bashar al-Assad’s regime in Syria provides a role model for the Pentagon commanders.

Thus Miller will “help transition the American military mission” to a hybrid war. The Pentagon has worked out an “over-the-horizon capacity” whereby American warplanes and armed Reaper drones based mainly in the Persian Gulf will participate or back up the Afghan military operations against the Taliban.

The US still hopes to reorganize the counterterrorism capabilities and assets in the region. The foreign ministers of Uzbekistan and Tajikistan were recently invited to Washington for consultations to formulate backup plans that could allow the US to bank on these two countries. Uzbekistan seems favorably inclined, prompting Afghan President Ashraf Ghani to visit Tashkent to follow up (see here, here, here, here and here).

In effect, Washington is seeking to reposition some forces in Uzbekistan and Tajikistan, which means that the first-tier troops, drones, bomber planes and intelligence assets to be placed at bases or appropriate facilities in these Central Asian countries remain available in real-time for intervention in the war against the Taliban.

United States Army General Austin Miller is staying on for a while. Photo: AFP / Francisco Seco

As in Syria, local Afghan militia groups can be brought into the fight against the Taliban. Afghan warlords have worked with the Pentagon and the US Central Intelligence Agency previously. Equally, the lobby of Pentagon contractors is very influential in the Washington Beltway and the White House is all but certain to extend their contracts.

The grand strategy appears to be: a) beef up the capacity of the Afghan forces, which would prevent an outright Taliban takeover but without the US taking on any combat duties; b) copy from the Russian playbook in Syria by heavily using airpower without putting boots on the ground; and c) make the Taliban realize through a war of attrition that there is no alternative to a negotiated settlement.

In an interesting role reversal from Syria, the US will claim that its involvement in Afghanistan is at the invitation of the Kabul government. Indeed, if the strategy is seen to be working, other NATO countries can be expected to join the fray, as happened in Syria and Iraq, embedded in the militia groups or Afghan military units.

The strength of the Pentagon contractors is put at 18,000 personnel, the bulk of whom have served in the US military previously. The activities of the Wagner Group in Libya and some African countries apparently provide an inspiring model for the Pentagon.

The American media are awash with apocalyptic visions of Afghanistan’s descent into civil war. This has helped generate domestic support in the US for the Pentagon’s and CIA’s continued involvement in Afghanistan, even as President Joe Biden extracts political mileage for ending the forever war.

Simply put, a hybrid war will be a “win-win” situation for the White House, the Pentagon and the CIA – and the North Atlantic Treaty Organization.

The bottom line is that for geopolitical reasons, the US and NATO are determined to remain as the dominant foreign presence on the Afghan chessboard. Washington visualizes that the regional states – Russia, China, Iran or Pakistan – may have serious reservations about a long-term US/NATO presence in Afghanistan, but they will not confront the US. 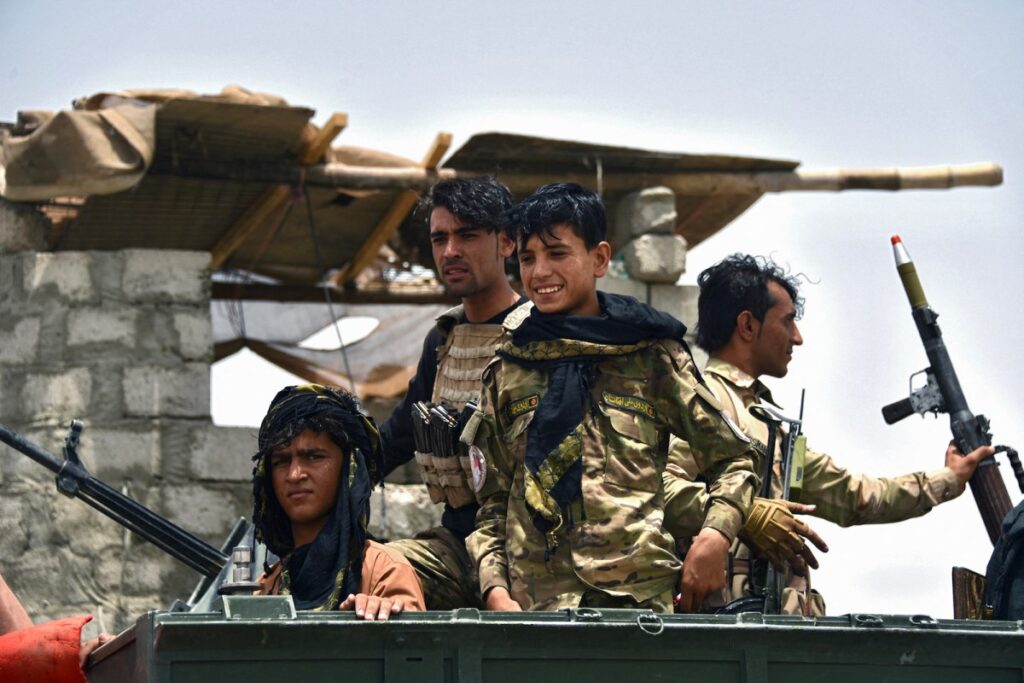 Afghan policemen sit on an armored vehicle at a checkpoint in Panjwai district of Kandahar province after the Taliban captured a key district in their former bastion after fierce night-time fighting with Afghan government forces, officials said on July 4, 2021. Photo: Javed Tanveer / AFP

Will the US strategy of hybrid war work? A definitive answer will be possible only through August, given the variables at work. But the chances are rather bleak. The humiliating defeat at the hands of the Taliban has created a profound credibility problem for the US in the region.

Besides, intrinsically, this is a high-risk strategy. The Taliban will resist and American lives may be lost. Again, the Central Asian states must agree to provide the staging posts for the hybrid war. The Taliban have sternly warned them.

Indeed, Russia and China are opposed to any American military presence in the Central Asian region. Russian Foreign Minister Sergey Lavrov has hit out at sections of Afghanistan’s ruling elite who are collaborating with Washington’s hybrid-war plans, accusing them of trying to prolong the negotiation process and scuttle the prospects for an interim government.

“They should think about the consequences of these actions for their homeland,” Lavrov said.

“Russia is already holding consultations both through bilateral channels and within the Collective Security Treaty Organization to protect its neighbors in Central Asia from any direct and serious threat,” Lavrov told reporters in Moscow last week. The remarks were obliquely referring to the US strategists.

But Moscow is not taking chances. Russia’s Southern Military District (which includes facilities in Tajikistan, Kyrgyzstan and Kazakhstan) will receive advanced military equipment, including the Sukhoi-34 multirole aircraft.

The air defense capabilities of the Russian base in Tajikistan are being strengthened, including with deployment of the newest Verba portable anti-aircraft missile systems (MANPADS).

Russian servicemen during the 70th anniversary of the 201st Russian military base in Dushanbe, Tajikistan. Photo: AFP / Amir Isaev / Sputnik

Most important, the Taliban’s success through the coming six to eight weeks to batter, demoralize and destroy the Afghan armed forces and shift the politico-military balance in their favor will be a key factor in the shape of things to come.

This is where Afghanistan is fundamentally different from Syria. The US is overlooking the big role Iran played in tandem with Russia to turn the tide of the Syrian conflict.

Meanwhile, the Taliban have also shown savviness to prevent other Afghan groups from uniting behind Ghani as well as to create synergy between its political track in Doha and the military path in Afghanistan. Against the backdrop of the US plans to fight a hybrid war, Taliban spokesman Zabihullah Mujahid told Reuters on Monday:

“The peace talks and process will be accelerated in the coming days … and they are expected to enter an important stage, naturally it will be about peace plans. Possibly it will take a month to reach that stage when both sides will share their written peace plan … Although we [Taliban] have the upper hand on the battlefield, we are very serious about talks and dialogue.”

The bottom line is that no regional state bordering Afghanistan wants the war to continue in any form. Within Afghanistan too, there is opposition to any further US military intervention. The cowardly manner in which the US troops slunk away from Bagram base will be talked about in the Afghan bazaar for a long time to come and will become folklore.

Former president Hamid Karzai, who remains an influential figure in Afghan politics and internationally, gave a string of interviews with the foreign media recently where his constant refrain has been that Afghanistan is done with US interference, and Afghans should be left alone to manage their affairs.

Disclaimer: Hybrid war could replace ‘forever war’ in Afghanistan By MK BHADRAKUMAR - Views expressed by writers in this section are their own and do not necessarily reflect Latheefarook.com point-of-view