When cries emerge from Kashmir over Israel’s devastating brutality against Palestinians, authorities respond with threats, arrests and heightened surveillance 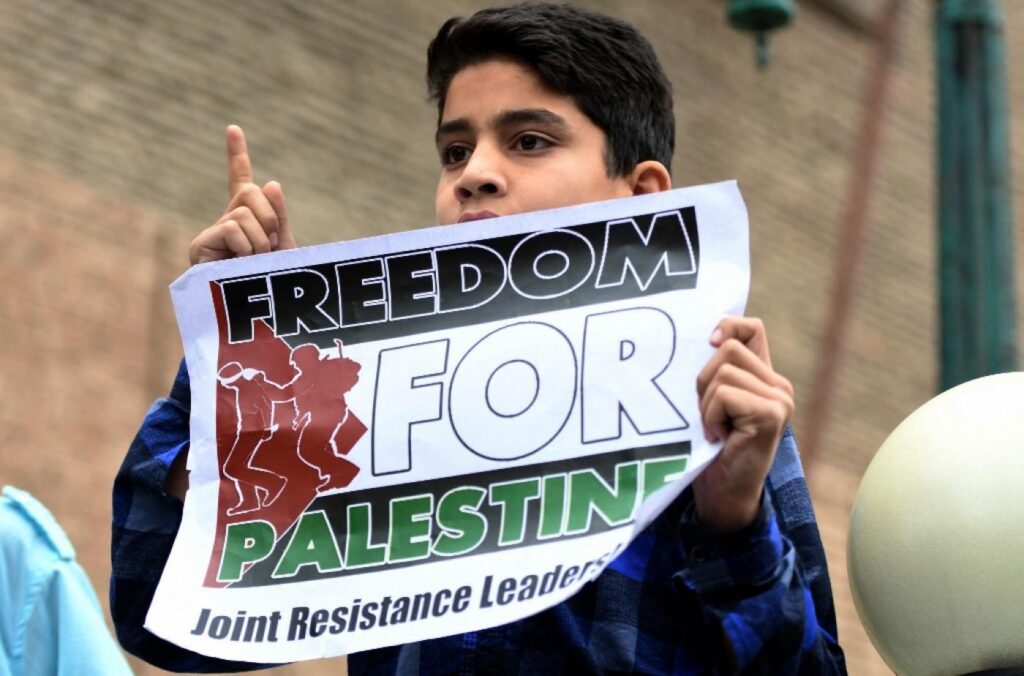 As the world has watched Israel kill Palestinians with brutality and impunity, and as Israeli bombs levelled the building housing the media offices of Middle East Eye, Al Jazeera and the Associated Press, Jammu and Kashmir police sent out a diktat via Twitter about social media usage.

“J&K Police is keeping a very close watch on elements who are attempting to leverage the unfortunate situation in Palestine to disturb public peace and order in the Kashmir valley … All irresponsible social media comments that results in actual violence and breaking of law including Covid protocol will attract legal action,” read the statement, a veiled threat in the name of law and order.

Despite repression and erasure, the call for freedom – from Kashmir to Palestine – continues to echo

This warning came as protests were held in parts in Kashmir, alongside an outpouring of support for Palestine by Kashmiri social media users. The region, militarily occupied by India and frequently likened to Palestine through a noticeable “motif of suffering”, often expresses solidarity with Palestinians fighting Israeli settler-colonialism even as Kashmiris fight their own battle against India.

Recently, graffiti reading “We are Palestine”, with the face of a crying woman wearing the Palestinian flag as a headscarf, was seen in Srinagar; police later had it covered with black paint. The graffiti artist and 20 other people who took part in protests were arrested. There are reports that some were released with a warning not to indulge in such activities.

A religious preacher, Sarjan Barkati, was also arrested for praying for Palestine and raising pro-freedom slogans for Palestine and Kashmir during the Eid sermon in his native village. Barkati, famous for his unique sloganeering style in support of Kashmir’s freedom, had been released in October last year after a four-year detention.

When an insurgency, backed by mass popular support, emerged in Kashmir in the late 1980s, a Palestinian man is known to have travelled there to join a local militant group. He was later arrested and died in prison.

In 2014, when Gaza was being bombed by Israel, a 14-year-old boy was shot dead by Indian forces in Kashmir at a pro-Palestine protest. These protests, joined by thousands across Kashmir, saw placards such as “Save Gaza” and “Down with Israel”, amid chants of “Go India, Go Back”. Young boys engaged in stone-throwing battles against Indian forces, who fired at protesters.

The slogans about Palestine and Kashmir, reflective of oppression and posing a challenge to suffocating state policies in each region, easily blend into each other, paving the way for an “affective solidarity”, as Kashmiri scholar Ather Zia puts it.

After India’s 2019 decision to facilitate the process of Indian citizens settling in Kashmir, the parallels with Israel’s settler-colonialism in Palestine became even stronger. The Palestinian boycott, divestment and sanctions (BDS) movement has called for solidarity with Kashmiris “under military repression that in so many cases is similar to Israeli forms of subjugation and control”.

In November 2019, while Kashmir continued to suffer under a total communications blackout, India’s consul general to the United States was seen in a viral video calling for the Israeli model to be applied in Kashmir.

In an emergency session of the UN Security Council last week, India’s condemnation of the current situation in Israel/Palestine largely relied on a vague mention of “all acts of violence”, but criticised in particular the rocket attacks from Gaza. It was another attempt at obscuring Israel’s ethnic cleansing of Palestinians, perhaps in part so that it could continue acting similarly in Kashmir.

In 2015, India had also abstained when the UN Human Rights Council voted on a resolution condemning Israel’s Gaza violations, in what came to be seen as part of the Israel-India romance. Israel is a major defence partner for India, with annual arms sales averaging $1bn, and India is the largest purchaser of Israeli weapons systems. India reportedly signed a secretive defence deal with Israel last year, to the tune of $200m.

While the military occupation and settler-colonialism in Palestine and Kashmir have their own distinct histories, trajectories and specific ends for Israel and India, both countries rely on similar forms of violence and dispossession, largely triggered by Islamophobia and the need to discipline and control the Muslim “other”.

Home demolitions, cultural aggression, erasure of history, refusal to hand over bodies for last rites, criminalisation of protest, and strengthening of surveillance architecture are policies that resonate in both countries as “embodied experiences of colonial occupation”. This is in addition to killings, massacres, torture, sexual violence, arbitrary detentions, and various other human rights violations embedded in the everyday militarised order.

Yet, it is not simply the rise of the right wing that sees India aligning with Israel’s settler-colonial project. Like Palestine’s Nakba, which people continue to live through, most of these forms of violence have existed for decades in Kashmir, irrespective of the regime in power in India. They continue to be strengthened through more blatant forms of counterinsurgency and digital militarism.

As much as the alliance of the settler-colonial regimes of India and Israel has strengthened over the years, the “similar topographies of pain” that Kashmiris and Palestinians share opens up possibilities for radical imaginings of liberation, alongside powerful solidarity. When cries emerge from Kashmir over Israel’s devastating brutality against Palestinians and al-Aqsa Mosque, authorities respond with threats, arrests and more surveillance of social media.

When a Kashmiri screams “Palestine” with love, admiration and rage, it is as much a threat to the occupying power as the slogan of “azadi” for Kashmir. It is an urgent, intimate prayer, a call for togetherness across occupied homelands. It rejects the hollowness of international human rights instruments that continue to protect the powerful through the “both sides” and “clashes” narratives.

Despite repression and erasure, the call for freedom – from Kashmir to Palestine – continues to echo.

Disclaimer: How India makes Kashmiris pay for Palestine solidarity - Views expressed by writers in this section are their own and do not necessarily reflect Latheefarook.com point-of-view