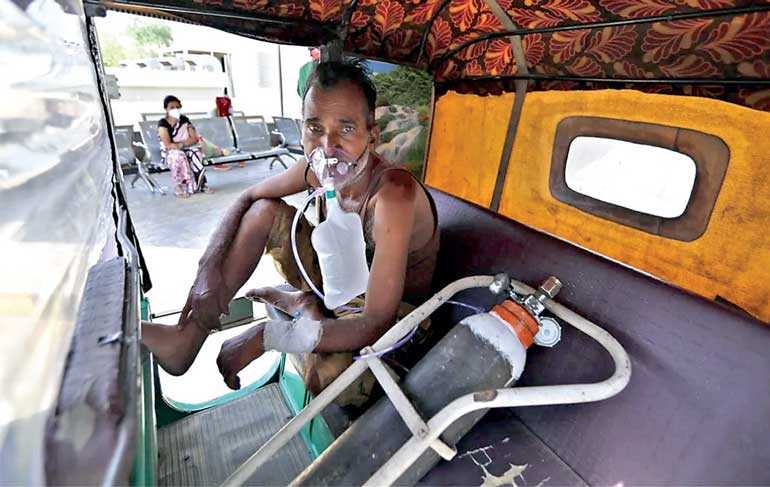 We cannot be insulated from India’s COVID cataclysm. It affects us too. More than that, it is a problem for the entire world. When the world’s sixth largest economy caves in, it will impact us in Sri Lanka, our South Asian region which we claim to serve as a logistics and supply chain hub, and the global economy that relies on the so-called burgeoning middle class of urban India

The response to the pandemic should not be shaped by political rhetoric. But it is. That is unfortunate.

The virus has overwhelmed the Indian subcontinent. The vast landmass across the Palk Strait is gasping for oxygen.

They say that India will record a million COVID deaths by August. Are we paying attention? How will it impact us?

On the face of it, a bubble is a great idea. But bubbles burst. That is why they are called bubbles.

The poet and preacher John Donne in his 1624 ‘Devotions upon Emergent Occasions’ famously reminded us that “No man is an island, entire of itself; every man is a piece of the continent, a part of the main.”

Politics is about either holding on to power or aspiring to gain power. Leadership is about doing the right thing, telling the truth, and admitting inconvenient truth.

Just a few weeks ago, India with its vast manufacturing capacity for much-needed vaccine, was hailed as the preferred pharmacy of the developing world. That included Sri Lanka.

India had flattened the curve, claimed its leader. He was getting ready for the end game. People who refused to comply with lockdown orders were beaten with sticks by the police.

Then the grassroots leader who was happy that England would play a test match with India in a stadium named after him permitted nearly three million devout Hindu pilgrims to attend the Kumbh mela. And why not? That is how India works.

Remember what Mark Twain said? “India is the cradle of the human race, the birthplace of human speech, the mother of history, the grandmother of legend, and the great grandmother of tradition.”

Today a COVID-gripped India with its 1.4 billion people is the problem that holds the entire humankind and our planet hostage to a virus whose silent, surreptitious footsteps we do not hear until we find it choking our lungs.

The Leader of the Opposition Sajith Premadasa speaking in Parliament on our own ordeal with the virus quoted Arundhati Roy who in an article in the Guardian has described the unfolding tragedy in her country as a crime against humanity.

I was disappointed that our Leader of the Opposition did not know that Arundhati Roy – who exemplifies the conscience of liberal India is a woman. Perhaps he may have grouped Arundhati Roy with Mukesh Ambani and Gautam Adani.

His reference to Arundhati Roy in third person masculine ‘Vidvatek’ and ‘E Thuma’ went quite unnoticed – a sad commentary on how informed our political class is on what goes on in the land of Ashoka, Mahinda, and Siddhartha.

While the Leader of the Opposition did make some valid points about how his early warnings went unheeded, he missed the big picture. We cannot be insulated from India’s COVID cataclysm. It affects us too. More than that, it is a problem for the entire world.

When the world’s sixth largest economy caves in, it will impact us in Sri Lanka, our South Asian region which we claim to serve as a logistics and supply chain hub, and the global economy that relies on the so-called burgeoning middle class of urban India.

The latest issue of the Atlantic magazine informs us that 92 developing countries depended on the vaccine supplies from India and principally from the Serum Institute – the world’s largest vaccine manufacturer. Now the activist Supreme Court of India will want to protect its productions for their own people.

Yes. We can blame Narendra Modi. While the finger pointing continues, the coronavirus is mutating. According to experts, its propensity to mutate is at the core of India’s and the world’s catastrophic predicament. Just as it happened early in China’s Wuhan Province and later in Rome and Milan in Italy, what unfolds in India will emerge somewhere else.

Last Monday’s Lankadeepa had two reports on its front page. An epidemiologist claimed that the Indian mutation was found in the country. In the other report, a Government Minister assured that the mutated virus has not been found in Sri Lanka.

According to hands on researchers as quoted in the Atlantic magazine, ‘despite efforts to restrict it, India’s new COVID 19 variant, called B.1.617 has already been identified at least in 10 countries, including the United States and Britain’.

If it has travelled that far that soon, should we not pay attention to that possibility here and now?

Until last week it is reported that we had visitors from India for whatever bizarre reason they were encouraged or induced to come.

The Leader of the Opposition cited Israel as a shining example of responsible, accountable governance in vaccinating its citizens. Unfortunately, his researchers have not briefed him on what Israeli scientists think about the virus that has converted the world’s pharmacy into the world’s largest incinerator for the dead.

Just as we pay attention to the deep state professionalism of the Israelis, we should develop the good habit of following Israeli scientists. What does Israel think about India’s mutated virus? Israel is not unduly worried reports the Times of Israel. But it also informs us that Israel’s health authorities are worried about India.

Israel being Israel, looks at the big picture. They believe that “All countries should be worried about India. If the world hopes to reach herd immunity, it cannot ignore the 1.4 billion in India.”

According to the Times of Israel, a senior official of the Israeli Health Ministry has warned: “We don’t know enough of the Indian variant and no research has yet been done to see how well the Pfizer-BioNTech vaccine widely used in Israel would cope with the new mutation in India.”

Maybe it is effective. Maybe it is not. The Israeli reaction is characteristic. They leave no space for complacency.

Ronen Ben Amin, the Head of the Infectious Diseases Unit at Tel Aviv’s Sourasky Medical Centre, explains the COVID conundrum with a succinct, picturesque metaphor: “Think of it like a roulette wheel, the more slots in the wheel, the more chance of winning. Likewise, the more people who have coronavirus, the higher the chance of variants of concern.”

“We talk a lot about herd immunity and the idea that if a percentage of a population is vaccinated it becomes protected,” says Ben-Ami.

“But given that all countries reside in the world, and the world is not immunised, herd immunity may only last so long. The lesson of 2020, learned well in Israel, is that the world is connected, and in a sense the herd isn’t one country, the herd is the world.” (https://www.timesofisrael.com/why-indias-covid-rampage-should-worry-israel-and-all-aiming-for-herd-immunity/)

Last week’s proceedings in Parliament on the Government’s handling of the COVID virus indicates a problem that the Greek philosopher Plato grappled with in his time – the contest and the conflict between knowledge and opinion.

Plato suggested a method to distinguish knowledge from opinions. ‘Episteme’ is knowledge the validity of which can be demonstrated. Opinion or ‘Doxa’ adhered to no rules or a test. Opinions were unfounded and therefore could be dismissed. Knowledge survived on its merits.

In these bleak and dark times, we seem to be flooded with opinions. It has become an urgent national imperative for us to distinguish knowledge of the virus from opinions about the virus.

Our capacity for intelligent deduction, I imagine, is much tougher than the stretchability of the rubber band that holds our face masks in place. We should know when truth is stretched beyond reason. People value and respect transparency. People are befuddled by contradictory messages. They are contemptuous of expedient gymnastics.

We have three Ministers handling COVID-related matters. That seems to be a good idea. And why not? To hold one Minister accountable means pinpointing responsibility. Politics is about avoiding blame, claiming credit, and if possible, holding opponents responsible for errors.

No island is entirely an island of its own

If India fails to get the pandemic under control, it affects the entire world. All the travel restrictions we impose will not address the spread of the virus. Achieving global herd immunity or herd immunity within a defined territory remains in the realm of opinion and not knowledge.

The poet John Donne said that no man is an island. The pandemic has demonstrated that no island is entirely an island of its own.

What happens in one place will impact some other part in the world. No island is an island.

And so, Arundhati Roy is a great female writer who dreams of a better world. She says, “Another world is not only possible, but she is also on her way. On a quiet day, I can hear her breathing.”

Please note. According to Arundhati, the new word she dreams of is a ‘she’. I am glad. I have five granddaughters and one grandson.

P.S. I am of the same age as Maurice Chevalier was when he sang ‘Thank heavens for little girls’.

Disclaimer: No island is an island - Views expressed by writers in this section are their own and do not necessarily reflect Latheefarook.com point-of-view