By suspending the account of Kashmiri activists and organisations, social networks are siding with undemocratic forces. 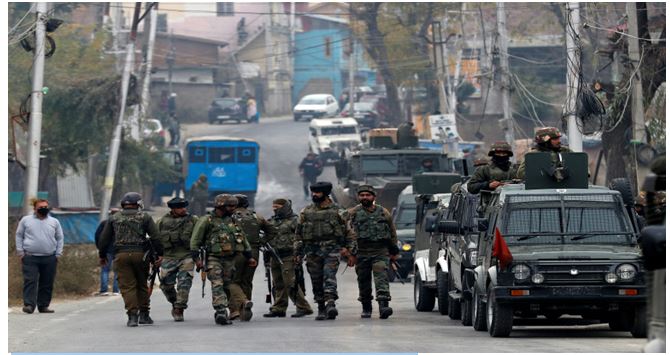 More than one million Indian soldiers are deployed in Kashmir [File: Reuters/Danish Ismail]

For decades, India has sought to obfuscate what is happening in Kashmir. Since 1947, it has worked hard to appropriate Kashmir’s history, culture, and identity and distort them. It has sought to muffle Kashmiri voices speaking out against the oppression of the Kashmiri people and whitewash its crimes.

With the advent of social media, Kashmiris found a much-needed platform for free expression where they were able to share their plight with the world. Kashmiri solidarity pages proliferated and conversations about the Kashmiri struggle moved online. But this newly found freedom did not last long.

Social media platforms, under the pressure of the Indian government, started shutting down Kashmir-related pages and the accounts of Kashmiri activists. In 2016, amid a crackdown on protests in Kashmir, Facebook took down pages focusing on Kashmir and posts about the ongoing events. Journalists reported that videos of police brutality were blocked. Academics and intellectuals also saw their accounts disabled.

Following the Indian government’s abrogation of Kashmir’s special status on August 5, 2019, and the imposition of a brutal lockdown, social media platforms were quick to censor content on Kashmir once again. As Kashmir was cut off from the world, with the internet and mobile communications suspended, Facebook, Instagram and Twitter started to remove posts, block videos and shut down accounts trying to shed light on the dire situation in the region.

Since then, the Indian government has partially lifted the lockdown on Kashmir, but social media platforms have continued to purge Kashmir-related content.

In the latest episode of censorship, Twitter shut down the accounts of Kashmir Civitas, Stand With Kashmir, the Kashmir Podcast, the account of young Kashmiri academic Ifat Gazia, and my personal Twitter account @fchak in March.

By removing content and accounts critical of India’s policies in Kashmir, Facebook and Twitter are complicit in suffocating those Kashmiri voices that are resisting the military occupation and settler-colonialism of their land. By censoring these voices, social media networks are curtailing the right to freedom of speech.

Our organisation, Kashmir Civitas is a non-governmental civil society and strategic advocacy entity registered in Canada and committed to the socio-political, and economic empowerment of the peoples in the disputed territory of Jammu and Kashmir.

It is an open, transparent organisation that peacefully challenges the false narratives that India has been propagating about the disputed region. It campaigns for the fundamental right of self-determination for the Kashmiri people. No democratic polity or principled individual, group or nation would credibly deny that right.

Moreover, the organisation’s foundational decree is not only premised on the Kashmiris’ inalienable rights as enshrined in the United Nations Charter, but is based on the principles expressed in a total of 18 United Nations (UN) resolutions on Kashmir, including Security Council Resolutions 39 and 47, adopted in 1948. Both unequivocally recognise the inherent right of self-determination for the Kashmiri people and provide for the status of Kashmir to be decided in a free and fair plebiscite under the auspices of the UN.

Our organisation firmly believes that the Kashmir dispute is not a bilateral issue between Pakistan and India. Rather, it is an international issue. Still, the most important stakeholders are the Kashmiri people – the “state subjects” of the disputed territory, who have every right to resist, by all lawful means, the colonisation of their land by Indian occupation forces.

As such, our organisation champions the democratic principles of freedom, equality and the inherent dignity of all human beings, irrespective of race, religion, gender or creed. It aims to lobby, facilitate and work for the moral, educational, economic, cultural and political uplifting of Kashmiri society on both sides of the ceasefire line and among the diaspora.

Why would Facebook and Twitter silence those who are speaking truth and fact, then lionise those who operate in deceit? We sent several inquiries to Twitter, but they never explained to us why our account was shut down. Then, suddenly, it was reinstated, as were the other suspended accounts.

Twitter’s censorship comes amid India’s unprecedented campaign to silence Kashmiri voices, strip the Kashmiri people of their rights and remove the Kashmir issue from the international agenda altogether.

Since the abrogation of Kashmir’s special status in 2019, which removed its self-governance rights and paved the way for the settlement of non-Kashmiris on Kashmiri land, more troops have been deployed to the region. Repression has increased. Journalists trying to report on the situation in Kashmir have faced censorship and intimidation, while politicians, activists and even ordinary citizens, including children, have been arrested by the thousands.

Even before this escalation, Kashmir was the most militarised place on the planet. Currently, more than one million Indian soldiers are deployed in the valley.

The Kashmir issue is one of the longest unresolved conflicts on the agenda of the UN. More than 95,000 people have been killed since the early 1990s, and around 6,700 unmarked and mass graves have been uncovered. An untold number of women have been harassed and sexually assaulted.

It is in this in dire situation that platforms like Twitter and Facebook are choosing to side with the repressive Indian government, which – amid its rising authoritarianism – still claims to be democratic.

Among the most admirable aspects of democracy – along with freedom, equality, pluralism and inclusion – is the empowerment of civil society which holds the powerful to account. A free, vibrant civil society is not only able to curb the abuse of power, but also to promote healthy civic engagement and participation, which is the bedrock of democratic, participatory polities.

By shutting down the accounts of collectives like Kashmir Civitas and Stand With Kashmir, Facebook and Twitter are siding with undemocratic forces that seek to silence not just Kashmiris but anyone who dares to oppose them. Although the accounts are now reinstated, we must remain vigilant and ensure that power does not remain unchecked. By doing the bidding of the Indian government, Twitter and Facebook have gone against their own “commitment to freedom of expression” and to “defending and respecting the user’s voice”.

Disclaimer: Why are social media platforms silencing Kashmiri voices? By Farhan Mujahid Chak - Views expressed by writers in this section are their own and do not necessarily reflect Latheefarook.com point-of-view