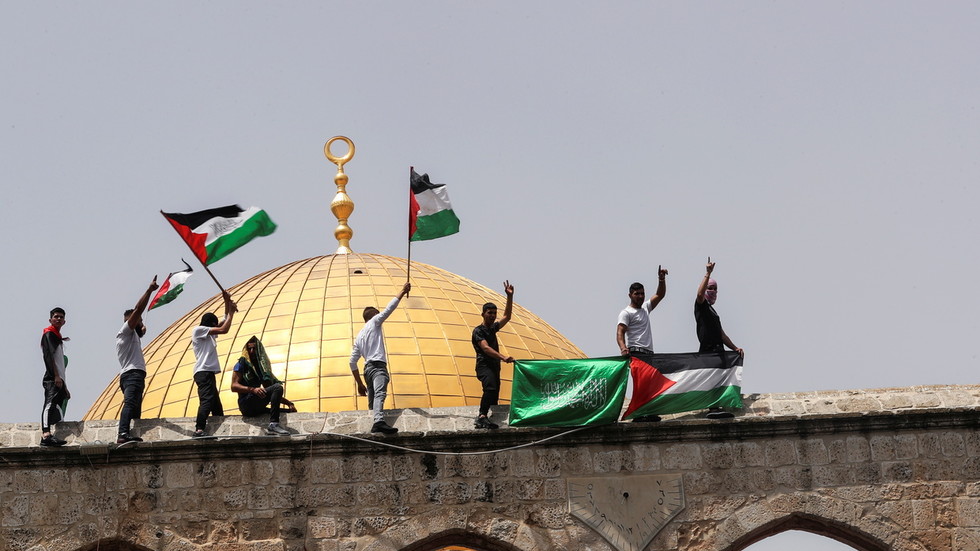 Palestinians hold flags as they stand at the compound that houses Al-Aqsa Mosque in Jerusalem’s Old City © Reuters
The recent fighting has revealed two new realities: the US’s once-automatic backing of Israel is fraying, and the much-parroted resolution for the conflict is a non-starter. Are we approaching seismic change in the Middle East?

After more than a week of fighting and hundreds dead, mostly Palestinians, Israel and the militant group Hamas agreed on Thursday to a ceasefire. Even though this is cause for celebration since it will mean an immediate end to hostilities, it hardly means an end to the conflict. But much has now changed in the dynamic of this problem, objectively the region’s most polarizing subject, in terms of the public discussion.

For starters, the conversation on this subject in the United States – Israel’s largest benefactor – has changed forever. As Ryan Grim of The Intercept described in a recent piece, this is the first time ever that members of the United States Congress have expressed disapproval against Israel. What we’re seeing is a generational change over how the public sees the conflict and I think it has to do with the fact that this is the most diverse Congress in history, in a country that is becoming more and more racially diverse.

Minorities in the United States, which have been mistreated and abused for centuries, feel a natural sympathy for the Palestinian cause since it reflects their own struggle. And unsurprisingly, for example, some of the largest Black Lives Matter personalities on social media, like activist Shaun King, are coming out against Israel’s aggression in Gaza. It’s clear that the public perception of the Israeli-Palestinian issue has changed along with a much wider public-perception shift over the issue of race.

Even though much of the mainstream media is highly sympathetic to Israel (if not actually reflecting Israeli PR campaigns in some cases), we’ve seen once-rare sympathy for the Palestinians and condemnation against Israel’s war crimes break through into cable news networks like MSNBC and, most strikingly, on John Oliver’s popular show Last Week Tonight.

Because of how this conversation is shifting, it requires us to not only call out the reality of the situation, but to also be more realistic in the solutions put forward. The most common one proposed for the situation, the one we hear about all the time from politicians and which is supported by virtually every major country, is the so-called two-state solution. We need to have a serious talk about why this hasn’t worked and why it can’t work under the status quo.

The two-state solution sounds nice in principle, but, as it stands, it can’t work – because of the Israeli government’s actions. For Israel, rhetorically supporting the two-state solution is essentially only a means for Israel to buy time for more illegal settlements that encroach on Palestinian sovereignty.

Without dismantling the settlements and holding Israel accountable for violating international law, the international community cannot guarantee a genuine two-state solution, since a Palestinian state would, by this point, have almost no effective sovereignty over its legal territory. There’s pretty much no chance that Israel will give up its settlements under the current situation.

That’s why the conversation needs to change, because it means either the international community needs to give Palestinian land back to Palestinians, which would require a complete U-turn in US foreign policy, or a one-state solution with equal rights for Palestinians is the only way forward – and that would spell even more complications.

As the American side has made clear, Israel faces a fundamental dilemma over whether it can simultaneously exist as a democracy and a Jewish state. If Palestinians were allowed equal rights, it would mean that Israel as a Jewish state would probably cease to exist, since there would be more Palestinians than Jewish Israelis under a single democratic state.

This is precisely the reason why Israel has essentially reduced its Arab population to less than second-class citizens and treats Palestinians in a way that has been described by many, including members of the US Congress, as an apartheid system, because its entire existence as a Jewish ethnostate relies on artificially separating out the people who lived there prior to its existence, whether that means literally keeping them out or keeping them out of any serious political project within Israel.

It is, to clearly define it, a settler-colonial project that carries with it the same classic contradictions seen through history, e.g., the displacement of the native population, ethnic cleansing, cultural appropriation and so on.

But just because Israel as a unified democratic state would not exist as a state where Jews have sole political and social rights does not mean it would not fulfill the intention behind its creation by the United Nations in 1948, e.g., being a refuge for the Jewish nation. Israel could be a peaceful, democratic and inclusive society if – and only if – its apartheid system is brought to an end.

The US under President Joe Biden is extremely unlikely to make any seismic policy shift, but public opinion is changing and the prevailing narrative that this is a “complicated” issue where “both sides” need to figure it out is quickly being rejected by new generations. What’s becoming clearer everyday to more people is that getting to the heart of this polarizing issue means addressing contradictions perpetuated by Israel since it’s Israel that wields most of the power, not Palestinians.

Disclaimer: Debate over the Israel-Palestine issue has changed forever, but here’s why the fabled ‘two-state solution’ is no solution at all by Bradley Blankenship - Views expressed by writers in this section are their own and do not necessarily reflect Latheefarook.com point-of-view