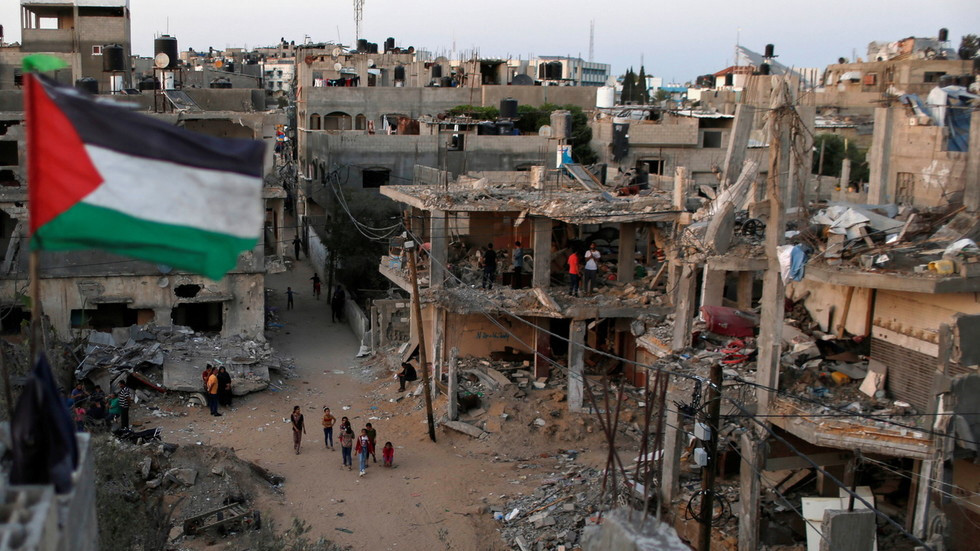 A Palestinian flag flies as the ruins of houses, which were destroyed by Israeli air strikes during the Israeli-Palestinian fighting. © Reuters
There are trillions of tonnes of recoverable gas lying underneath the disputed waters off Gaza, Israel, Syria and Lebanon. And the Israelis want to make sure they alone control and profit from it.

Few topics rile people up on both sides of the political aisle more than the Israel-Palestine question. It is without doubt one of the most – if not the most – explosively divisive issues on the planet.

For example, when I have criticised Saudi Arabia’s criminal bombardment of Yemen, I have never once even contemplated fearing a backlash of people accusing me of being anti-Islamic or labelling me an Islamophobe. (Sure, Saudi nationals critical of its government’s actions may have to avoid entering into their local Saudi consulate upon invitation, but that’s for a different reason.)

Likewise, if I write about Indonesia’s treatment of the population of West Papua, described by some observers as equating to a “slow motion genocide,” I rarely have to worry about being accused of being anti-Indonesian, or racist or bigoted in any other way for that matter.

For those of you who don’t know, West Papua is home to one of the world’s largest gold mines known as the Grasberg Mine, which is co-owned by the American mining firm Freeport McMoRan and the Indonesian government. Curiously enough, Freeport McMoRan is Indonesia’s largest taxpayer – it provided the government with $33 billion in direct and indirect benefits from 1992 to 2004, and has given millions directly to senior military and police officers.

The real reason behind enacting what can only be described as a military dictatorship which brutalises the population of West Papua has been to preserve this literal gold mine since the rights to the mine were first given to Freeport McMoRan in 1967.

Is this a controversial take on the issue of West Papua?

Believe it or not, it is possible to view the Israel-Palestine conflict through the same lens with the same level of controversy as the above paragraph.

In 2000, UK oil company BG Group discovered an estimated 1.6 trillion cubic feet of recoverable gas in the Gaza Marine. As noted by Anais Antreasyan in the University of California’s Journal of Palestine Studies, Israel’s continued desire to control Gaza is due to its aim of making “Palestinian access to the Marine-1 and Marine-1 gas wells impossible”, with the added goal of not only “preventing the Palestinians from exploiting their own resources” but to “integrate the gas fields off Gaza into the adjacent Israeli offshore installations.”

According to Antreasyan, this is part and parcel of a broader strategy of:

“…separating the Palestinians from their land and natural resources in order to exploit them, and, as a consequence, blocking Palestinian economic development. Despite all formal agreements to the contrary, Israel continues to manage all the natural resources nominally under the jurisdiction of the PA, from land and water to maritime and hydrocarbon resources.”

Israel barely has enough energy resources of its own to maintain its current exports. Following the discovery of the $4 billion worth of natural gas in Gaza in 2000, there were also later other monumental discoveries of gas in Syria and Lebanon, two known adversaries of the Israeli government. Israel has for some time now shown a keen eagerness to intervene in both countries (for completely unrelated reasons, I’m guessing).

Earlier this year, fresh rounds of talks had begun between Israel, the Palestinian Authority (PA), Qatar and the EU in respect of Israel’s goal of exporting Eastern Mediterranean gas to Europe. The problem has been, at least as far as the US and Israel are concerned, that Hamas has continued to present itself as a thorn in the side of these negotiations, denouncing their legitimacy entirely.

While many on both the left and right, including former US president Donald Trump, are quick to argue that the only reason the US has ventured into the Middle East was for oil and natural resources, very few seem capable of acknowledging the very same issues are also at the heart of the Middle East’s most explosive conflict.

This is despite a UN report, and a US Army study which was commissioned under the Obama Administration which indicated that the recent decision to proceed with a $735 million arms sale to Israel is due to Israel’s aspired domination of the East Mediterranean’s energy resources, and US tacit support for this eventuation. In fact, the 2019 UN report which until recently was unreported, concluded that “occupation has impoverished the Palestinian people, undermined their capacity to access and utilise their resources and denied them the right to move freely within their homelands.”

Occupation? Oh… that’s right. Israel is currently the military power occupying Palestinian territories. The same military power which was brutalising Palestinians at the al-Aqsa mosque while simultaneously forcibly evicting Palestinians from their homes, which in turn led to Hamas’ decision to retaliate using rocket fire. But we don’t talk about that, because only Israel has the “right to defend itself.”

Except it’s the occupying power, so technically focusing on Israel’s “right” to do anything is misstating the issue. Israel doesn’t have rights – what it has is a series of obligations under international law. You know, obligations to ensure Palestinian people receive respect for their persons, religious practices, be treated humanely, be protected from violence, be provided with food and medical supplies, facilitate relief supplies, to name a few.

While pro-Zionists like to argue that anyone who pushes back against Israel’s protracted assaults on Gaza are either anti-Semitic or terrorist-apologists (or both), in an ideal world there would be no escaping these facts. If discussing these facts paints a negative picture of Israel and its actions, then so be it. And yet, in some cases, talking about these issues can quite literally get you fired.

In July 2014, journalist Nafeez Ahmed learnt this the hard way when he published an article on the Guardian website which claimed Israel’s brutal assault on Gaza during Operation Protective Edge was rooted in Israel’s desire to control Palestinian gas. The Guardian axed his blog completely shortly afterwards.

Talk about “cancel culture.” Yet somehow, I haven’t seen any conservatives complaining about “censorship” and “cancel culture” rushing to Ahmed’s defence.

Disclaimer: Everyone is wrong about Israel-Palestine – here’s how the pursuit of huge gas reserves and money is fuelling the conflict by Darius Shahtahmasebi - Views expressed by writers in this section are their own and do not necessarily reflect Latheefarook.com point-of-view