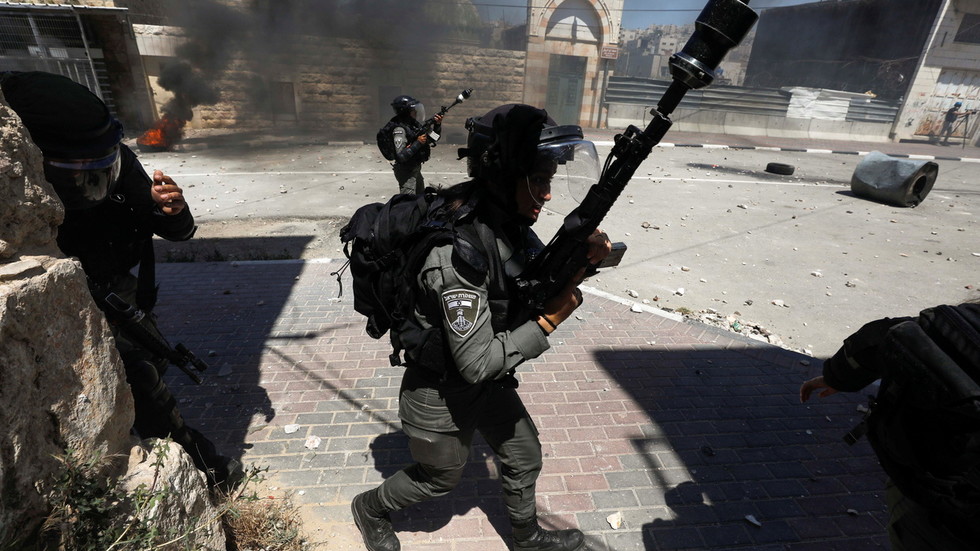 Members of Israeli police in Hebron in the Israeli-occupied West Bank, May 14, 2021© REUTERS/Mussa Qawasma
The latest Arab-Jewish escalation reveals that rule of law is disintegrating in Israel – at least for Palestinians, who are left to themselves and cannot appeal to any higher agency that will intervene when they are attacked.

Sometimes the Slovene government does something that makes me deeply ashamed of being a citizen of Slovenia. One such moment came earlier this month when, in an act of solidarity with Israel, it decided (together with Austria and the Czech Republic) to fly Israeli flags along the national and EU flags on government buildings. The official explanation was that Israel is under rocket attacks from Gaza and has to defend itself – none of the usual calls for mutual restraint, just a clear assignation of guilt.

But the current escalation of the Israeli-Palestinian conflict did not begin with rockets from Gaza; it began in East Jerusalem, where Israel is again trying to evict Palestinian families. The frustration of the Palestinians is easily understandable: for over 50 years following the 1967 Six-Day War, they have been stuck on the West Bank in a kind of limbo, with no identity, refugees in their own land.

This protraction is in Israel’s interest: they want the West Bank, but they don’t want to directly annex it, because in doing so they would have to make the Palestinians living there Israeli citizens. So the situation just drags on, and is from time to time interrupted by negotiations which were perfectly described by a Palestinian participant: both sides sit at the opposite sides of a table with a pizza in the middle, and while they negotiate over how to divide the pizza, one side constantly eats its parts.

When, as a sign of solidarity with protesting Palestinians on the West Bank, Hamas began to launch rockets against Israel, this act (which should be condemned) could have served as the perfect ground for Netanyahu to gain political points: a genuine desperate protest against the Israeli ethnic cleansing became yet another Hamas-Israel conflict, with Israel just responding to rocket attacks. But Netanyahu had to admit that the civil unrest in Israel was a greater threat than the rockets from Gaza. He condemned the “anarchy” of Jewish-Arab violence in cities across Israel.

One of the focal points of the protests is the Israeli city of Lod, south-east of Tel Aviv, with a strong Palestinian presence. Lod’s mayor has described the events as a “civil war.” Gangs from both sides are terrorizing individuals, families, and stores, up to direct lynchings.

“Far-right Jewish Israelis, often armed with pistols and operating in full view of police, have moved into mixed areas this week. In messages shared by one online Jewish supremacist group, Jews were called to flood into Lod. ‘Don’t come without any instrument for personal protection,’ one message read,” the Guardian reported on Saturday. “Amir Ohana, the public security minister, has encouraged vigilantism, announcing on Wednesday that ‘law-abiding citizens carrying weapons’ were an aid to authorities. He made the comments after a suspected Jewish gunman was accused of killing an Arab man in Lod. The minister, without presenting evidence, said it was in self-defence.”

The most dangerous aspect of the situation is that the Israeli police are not even pretending to be acting as a neutral agent of the law and public safety; they were reportedly applauding the far-right Jewish mob waving Israeli flags in Lod.

In short, the rule of law in disintegrating in Israel, at least for its Palestinian citizens – they are left to themselves, alone; they cannot appeal to any higher agency that would intervene when they are attacked. This scandalous situation is just a consequence of what has been going on in Israel in recent years: the openly racist extreme right (who want to assert what they obscenely call Israel’s “full sovereignty” over the West Bank and treat Palestinians who live there as unwelcome intruders) is more and more recognized as legitimate and becoming part of the public political discourse. This racist stance has always been the de facto foundation of Israeli politics, but it was never publicly acknowledged; it was just the secret – although known to everyone – motivation of the Israeli politicians whose public official position was always (at least until recently) the two-state solution and respect for international laws and obligations.

ALSO ON RT.COMIsrael is deliberately obliterating media buildings in Gaza to cover up the war crimes that will followNow that this facade of respect for the law is dissolving, it is not enough to say that the reality we see now was the truth behind the appearance all along. Appearances are essential; they oblige us to act in a certain way – so without the appearance, the way we act also changes. The distance between the public appearance and the dark reality behind it enabled Israel to present itself as a modern state of law in contrast to Arab religious fundamentalism, but with this public acceptance of the religious fundamentalist racism, Palestinians are now a force of secular neutrality, while the Israelis act like religious fundamentalists.

The wider context of this escalation of events in Israel makes the entire picture even darker: first in France, then in the US, a considerable group of military officers and retired generals published letters warning against the threat to the national identity and the way of life of their countries. In France, the letter attacked the tolerance of the state against Islamization, and in the US, they warned about the “socialist” and “Marxist” politics of the Biden administration. The myth of the depoliticized character of the armed forces is dispelled: a considerable part of the army supports the nationalist agenda. In short, what happens now in Israel is part of a global trend.

ALSO ON RT.COM‘You weaken our institution’: Top French cop hits back at 93 ex-officers who signed letter calling for ‘civil war’ to be avoidedBut what does this mean for the Jewish identity? As one of the Holocaust survivors said, “In the past, an anti-Semite was a person who dislikes Jews; now, an anti-Semite is a person whom Jews dislike.” The title of a recent dialogue on anti-Semitism and the Boycott, Divestment, Sanctions (BDS) movement in Der Spiegel was: “Wer Antisemit ist, bestimmt der Jude und nicht der potenzielle Antisemit” (“The Jew, not the potential anti-Semite, determines who is an anti-Semite”). OK, sounds logical; the victim should decide their victim status, so in the same sense that this holds for a woman who claims she was raped it should hold also for Jews. But there are two problems here: (1) Shouldn’t the same also hold for Palestinians on the West Bank, who should determine who is stealing their land and depriving them of elementary rights? (2) Who is “the Jew” who determines who is anti-Semitic? What about the quite numerous Jews who support the BDS or who, at least, have doubts about the State of Israel politics on the West Bank? Is it not the implication of the quoted stance that, although empirically Jews, they are in some “deeper” sense not Jews, they betrayed their Jewish identity? (I was once ferociously attacked as anti-Semitic for just using the term “the Jews”…)

Italian historian Carlo Ginzburg proposed the notion that a shame for one’s country, not love of it, may be the true mark of belonging to it. A supreme example of such shame occurred back in 2014 when hundreds of Holocaust survivors and descendants of survivors bought an ad in Saturday’s New York Times condemning what they referred to as “the massacre of Palestinians in Gaza and the ongoing occupation and colonization of historic Palestine.” “We are alarmed by the extreme, racist dehumanization of Palestinians in Israeli society, which has reached a fever-pitch,” their statement read.

Disclaimer: Israelis’ SHAME over what their state is doing in West Bank would be sign of truly belonging to Israel by Slavoj Zizek - Views expressed by writers in this section are their own and do not necessarily reflect Latheefarook.com point-of-view