Masked soldiers will still terrorise Palestinian children in the middle of the night, but new military jargon will hide the true purpose 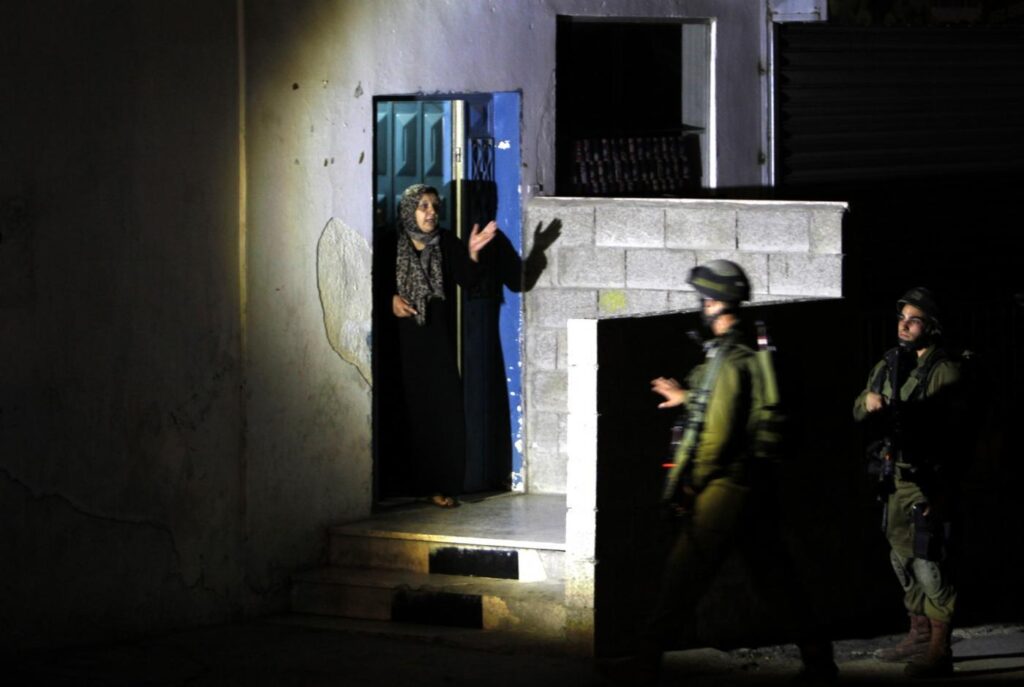 Israeli soldiers interrogate a Palestinian woman during a night raid in the occupied West Bank refugee camp of Jalazun, north of Ramallah, in 2014 (AFP)

The videos are all over YouTube. Masked Israeli soldiers storm a Palestinian family’s home in the middle of the night. Parents, dressed in nightwear, are suddenly surrounded by heavily armed men in balaclavas.

Young children are forced awake. With a mix of bleary-eyed confusion and fear, they are made to answer questions posed to them in broken Arabic by these faceless, armed strangers. They are lined up in one room while the soldiers take photographs of them holding their identity cards. And then, just as suddenly as they arrived, the masked men disappear into the night.

The reality is that ‘mapping’ was never really about building up a more accurate picture of Palestinian society. It has many other, far more sinister aims

There are no questions beyond identifying the people in the house. No one is “arrested”. There’s no obvious purpose; just a family’s sense of security permanently wrecked.

To most people watching these startling videos, such scenes look like an Orwellian nightmare. And sure enough, Israel has given this procedure an Orwellian name: “intel mapping”.

Last week, under pressure from the courts, the Israeli army announced that it had ended the practice of “mapping”, unless – and this will be a loophole easily exploited – there are “exceptional circumstances”.

Given that the families whose homes, privacy and dignity are invaded are not suspected of any offence, it is difficult to imagine what “exceptional circumstances” could ever justify these degrading and terrifying raids.

In announcing its decision, the Israeli army said that in the digital age, there were other tools it could use to gain intelligence on Palestinians, beyond randomly invading their homes with guns in the middle of the night. A statement added that it was a humanitarian gesture aimed at “mitigating the disruption of citizens’ everyday life”.

Except, of course, Palestinians are not Israeli “citizens”; they are subjects without rights living under a belligerent military occupation. And this is not about “disruption” – Palestinians aren’t facing an unexpected train delay – but a form of collective punishment, and therefore a war crime.

As a report by three Israeli human rights organisations published last November observed, “it is highly doubtful that any instance of mapping could be considered legal under international law”. Nonetheless, these home invasions are commonplace. They are integral to the Israeli army’s policy of surveilling, controlling and persecuting Palestinians.

According to figures compiled by the United Nations, the Israeli army carried out around 6,400 “search or arrest operations” in 2017 and 2018 alone – with each operation potentially including more than one home. Research by Yesh Din, an Israeli human rights group, shows that the vast majority of such operations start between midnight and 5am.

In a quarter of cases, soldiers break down the door to enter, and in a third of cases, a family member is physically assaulted. Two-thirds of families have experienced these invasions more than once.

“Intel mapping” operations have been particularly difficult for the army to justify on any kind of security grounds. That led earlier this year to unwelcome scrutiny from Israel’s top court, which gave the army until August to divulge the wording of its “mapping” protocol. The army’s cancellation of the practice last week means that the rationale for traumatising thousands of Palestinian families over many years will continue to be a secret.

The reality is that “mapping” was never really about building up a more accurate picture of Palestinian society. It has many other, far more sinister aims.

In practical terms, it is used to train young Israeli soldiers, familiarising them with the techniques of invading Palestinian homes and intimidating Palestinians – all in a safe environment for the soldiers. The army knows that Palestinian parents will be primarily concerned with protecting their children from the terrifying presence of armed intruders in what should be the family’s safest space.

In testimony to Breaking the Silence, an organisation for whistle-blowing Israeli soldiers, one soldier observed: “There’s rarely an operational motivation for it. Often, the motivation is practice, meaning we got a breaching tool [for forcing open doors] for the first time; no one knows how to use it, so it is decided that we break into a house now.”

But there are other, even darker purposes behind these random “mapping” raids. They are part of the gradual process by which the army acculturates its young soldiers into a life of committing habitual war crimes. It breaks down their sense of morality and any remnants of compassion after years of exposure in Israel’s school system to anti-Palestinian racism.

It turns Palestinians into nothing more than objects of suspicion and fear for the soldiers. Or as one Palestinian woman told Yesh Din: “The way they banged and came into the house was like entering somewhere with animals, not people.”

But most important of all, home invasions traumatise Palestinians in ways designed to entrench the occupation and make it more permanent. They are a form of psychological warfare – a campaign of terror – against both the families and the communities they live in. They reinforce the message that the Israeli army is everywhere, controlling the smallest details of Palestinians’ lives.

Several soldiers told Breaking the Silence that the goal was to make Palestinians feel persecuted. One noted: “The bigger mission was to instill a sense of persecution in the Palestinian population. That’s not my phrase, it’s a phrase that actually appeared in [military] presentations and briefings.”

The soldiers take this guidance to heart. One said he understood the purpose of hiding his face “was to be more intimidating, scarier, and then maybe you get less resistance”.

Palestinian men, women and children are reduced to nothing more than pieces to be swept off a chess board

“Mapping” raids are designed to make Palestinians believe that any kind of opposition to the occupation is futile, or counterproductive. Home invasions leave permanent scars, as women often describe feeling violated and losing a sense of pride in their home, while men suffer from the trauma associated with being unable to protect their wives and children. Children are left with anxiety and sleep disorders, and they struggle at school.

There is a further goal to these “mapping” operations when Jewish settlements have been built close to the Palestinian families being targeted. Home invasions take place on a regular basis for these families, serving as a form of pressure to encourage them to abandon their homes so the settlers can replace them.

A 2019 UN survey of an area of Hebron coveted by settlers found that over a three-year period, 75 percent of Palestinian homes in the neighbourhood had been “mapped”. One resident whose home was raided more than 20 times told Yesh Din researchers: “I think the entry [by soldiers] is just harassment, to drive us out of the house.”

Even some former soldiers understand that the intelligence-gathering rationales for these invasions are bogus. Several told the human rights groups that the intelligence supposedly gained from these operations was never put to later use. None could identify a database where the information was being stored.

Even if the mapping raids were primarily about collecting information, the army has far more effective means to spy on and control the Palestinian population in the occupied territories of the West Bank and East Jerusalem.

The job of Unit 8200, one of the Israeli military’s many intelligence-gathering arms, includes listening in on Palestinian communications to find secrets that can be used to blackmail and extort Palestinians to collaborate with occupation authorities.

A so-called cyber unit in Israel’s justice ministry is tasked with spying on Palestinians’ internet and social media communications. And Israel has endless other sources of intelligence on Palestinians: collaborators, the Palestinian population registry that it controls, biometric identity documents, face-recognition technology, questioning at checkpoints, the use of drones, and the seizure of Palestinians for interrogation.

More importantly, the army knows that it can continue as before with these home invasions by using other pretexts. It will subsume “mapping” operations within even more violent categories of night raids – such as the search for weapons, interrogations of children about stone-throwing, or arrests.

Sadly, the Israeli courts have always shown a willingness to collude with the army in precisely these kinds of face-saving deceptions and cynical manipulations of language. There is no reason to believe that the Israeli legal system will do anything in practice to ensure that home invasions, whether for “mapping” or any other purpose, come to an end.

The record of Israeli courts has been consistently dismal in protecting Palestinians from Israeli army abuses. Even when the courts do belatedly rule against army protocols that flagrantly violate international law, the army invariably finds ways to undercut the ruling – usually with the court’s complicity. For years, the army has continued to use Palestinians as human shields, dragging out legal proceedings by recharacterising the practice as a so-called “neighbour procedure” or “prior warning”.

It is not hard to imagine that “intel mapping” could be given a similar linguistic makeover. And there is an additional reason to be sceptical: more than 20 years ago, Israel’s top court banned the torture of Palestinian detainees – yet, it continued almost unabated because the court created a loophole for cases defined as “ticking bombs”, when interrogators supposedly faced a race against time to extract information to save lives.

After the ruling, it seemed that every Palestinian seized by the army became a “ticking bomb”. Finally, in 2017, the court reversed its 1999 ruling when it permitted torture as long as interrogators did not cross a threshold of pain that it declined to determine in advance.

The reality is that when Israel treats its occupation as permanent, then preserving the occupation’s infrastructure – for surveillance, control, intimidation and humiliation – becomes an absolute necessity. When the occupier additionally seeks to drive out Palestinians to replace them with its own settler population, the rot runs deeper still. Palestinian men, women and children are reduced to nothing more than pieces to be swept off a chessboard.

For that reason, home invasions – the terrorising of families in the middle of the night by masked soldiers – will continue, whatever euphemism is used to justify it.

Disclaimer: Israel's night raids on Palestinian families aren't over, whatever the courts say by Jonathan Cook - Views expressed by writers in this section are their own and do not necessarily reflect Latheefarook.com point-of-view