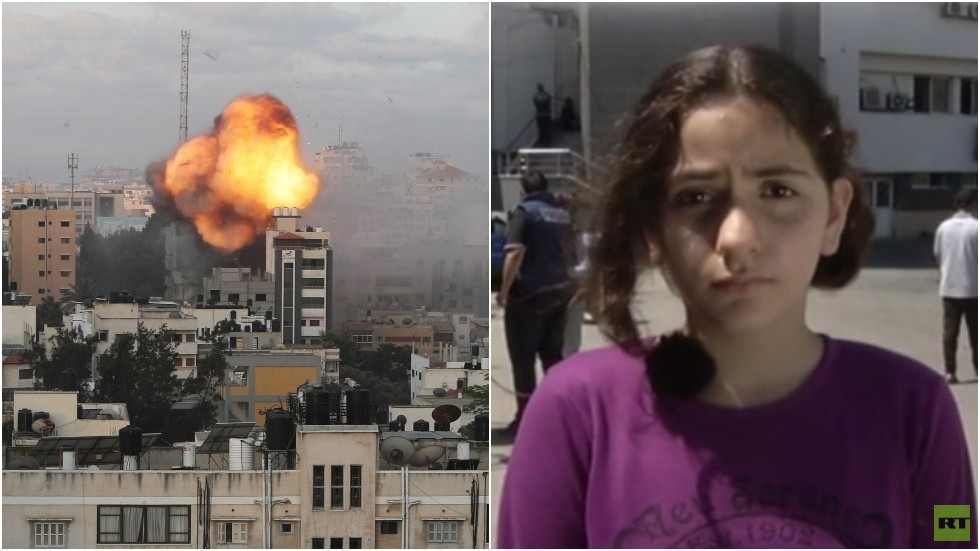 Her dream is just to be a “regular person” who doesn’t have to fear airstrikes at night or hear people’s cries the next day. Nadine Abdel-Taif from Gaza, which is being pounded by Israel, talked to RT about her daily trauma.

Nadine has been branded the face of the suffering of the Palestinian children in the ongoing flare-up between Israel and the Gaza-based Hamas militant group since her tearful monologue went viral on social media a few days ago. Speaking in English, she shared her frustration, helplessness, and inability to understand what was going on after an Israeli missile flattened a building near her home.

“Every day, at night or in the evening, we hear the missiles. In the mornings, we hear the cries and screams of people,” Nadine told RT, describing the cross-border attacks that began a week ago.

When the strikes start, her family place two mattresses in the hallway of their home and lie down, trying to stay away from the windows and the glass door, she said.

No one can sleep at night. I try to sleep, but I can’t, because of the missiles and the cries of children. I just put a pillow on top of my head. Like nothing is happening out there. Like no one is getting hurt.

While Nadine says she tries to remain calm, she’s terrified about the safety of her younger brother, who she’s closest to. “I just don’t want him to see fear, like I’ve been growing up seeing fear,” she said. “If anything happens to him, I don’t think I’ll be myself anymore.”

Nadine can’t play in the street with her friends like before, because a missile might land nearby at any moment. In fact, she tries not to go outside at all, saying, “If you come outside, the first thing you’re going to see is people lying in the streets … That just hurts my heart.”

I feel terrible for the people [whose homes were destroyed], I just want to… do something, but I can’t. I’m just 10.

And not only is Nadine in immediate danger, but the Israeli strikes also jeopardize her future by preventing her from studying. “I dream to be a doctor. And I dream to be helping my people. But how can that happen? I’m just a kid. I don’t have the right to learn anymore. So, what do you expect me to do? I’m just crying every day,” she said.

“No one is safe in Palestine. No one,” the girl said, adding, with a maturity beyond her years, that “parents don’t know how to raise their kids in this situation. It’s hard for them and hard for us.”

Nadine also confessed that she saw videos from the US, Russia, and other countries online and envied the children who, unlike those in Gaza, were simply “having fun.”

The Israel Defense Forces (IDF) said Hamas had fired more than 3,000 rockets towards Israeli territory since the current escalation began, but many of them had been shot down by the Iron Dome air defense system or fell inside Gaza. At least 12 people were killed and more than 50 wounded in Israel by those attacks, according to media reports.

Israel retaliated by hitting multiple targets in densely populated Gaza, and leveled a number of towers it claimed were being used by Hamas. The IDF strikes resulted in at least 217 civilian casualties on the Palestinian side, according to the Gaza Health Ministry, with 63 of those victims said to have been children.

Disclaimer: ‘No one’s safe in Palestine’: 10yo Gaza girl whose heart-rending clip went viral tells of ‘sad’ life under Israeli missile attacks - Views expressed by writers in this section are their own and do not necessarily reflect Latheefarook.com point-of-view