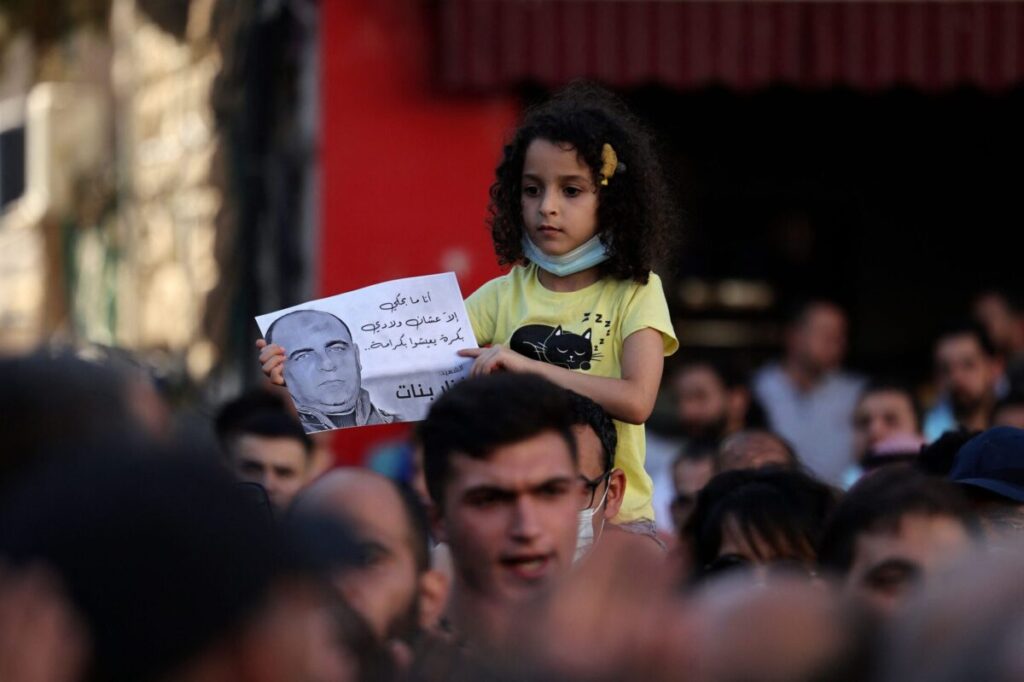 The Palestinian Authority’s murder of opposition figure and political activist Nizar Banat in the occupied West Bank is still reverberating around the local political, security, and media arenas. The killing of Banat was a sign of the increasing security hegemony imposed by the PA free of legal oversight by the judicial authorities. It also indicated that the Palestinian leadership is trying to tighten the screws on freedom of opinion and expression.

The brutal way that he was killed was meant to act as a deterrent to anyone else thinking about opposing the PA and its policies. It was preceded by a steady decline in press and media freedoms in the West Bank, including the closure of media institutions, the cybercrime law, and the prevention of newspapers and magazines being distributed. There has also been a regular campaign of arrests and more summonses issued to journalists, writers, and social media activists.

Why did the PA kill Nizar Banat? – Cartoon [Sabaaneh/MiddleEastMonitor]

The PA’s attacks on political dissidents range from physical violence, arrest, bans, arbitrary summonses, and lawsuits. All are imposed on Palestinian journalists, bloggers, and opinion-formers, and demonstrate the PA’s repression of the media and curbs on public freedoms.

One undisclosed aspect that has a negative effect on freedom of opinion and expression in the Palestinian territories is the financial crisis hitting independent media. This comes at a time when funds are being wasted on the PA’s official television channel by manipulating staff appointments and failing to adhere to the principle of equal opportunities. Moreover, the official media disseminate a partisan discourse rather than speaking on behalf of all Palestinians.

The PA continues to use its television channel as a platform to throw accusations against the factions without granting them the opportunity to respond. The channel has become a one-party outlet where the presidency controls every detail, including the news.

Furthermore, the authority has been working on pushing journalists to write about anything other than politics and to use self-censorship in the process; this is on top of the existing security surveillance. Media professionals become paranoid about the security forces monitoring their computers and seeing what they write as they became perceived as dissidents and not journalists working in a legitimate profession. This is a major concern for them as it should be for all of us.

In the midst of the crackdowns by the General Intelligence and Preventive Security Service, even journalists’ equipment is confiscated. What’s more, they have no legal system to which they can turn for protection, even when torture is used and no charges are levelled against them. The purpose of the arrests is to act as a deterrent and make journalists muzzle themselves.

I have discussed this with many Palestinian journalists affected by the PA’s repression, and they revealed that they have been beaten, insulted, placed in very narrow cells, and treated as if they are criminals. Often facing travel bans, they believe that they are prisoners in their own homeland, unable to practise their profession, which some have now left.

In addition to the aforementioned violations, in 2017 PA President Mahmoud Abbas issued Law No. 16 on cybercrime. The law was kept deliberately ambiguous with terminology such as state safety, racial strife, national security, civil peace, public order, community safety, and harming national unity, without clarifying the exact definition of these terms. This is despite the fact that laws require a degree of clarity in their drafting so that they cannot be misused for political and other purposes. Such clarity helps to prevent politically-motivated injustice of the kind that we are now seeing. We know now why Law No. 16 was kept so vague.

Along with the arbitrary policies employed by the PA against journalists, the brutal assassination of opposition activist Nizar Banat suggests that the authorities in the West Bank have dropped all pretence that it is operating in the best interests of the people of Palestine. Indeed, the PA appears to have succumbed to the laws of the jungle, where chaos and, in modern parlance, terrorism is the norm. The PA security services could have ended Banat’s life with a bullet fired by an unknown gunman, but they didn’t. They made his assassination so heinous and cruel intentionally, to be a warning for anyone who dares to oppose them.

Curbing public and press freedoms can never be in the best interests of the people, and killing opposition activists simply because of their political opinions and quest for justice certainly isn’t. So in whose interests is the Palestinian Authority acting?

Disclaimer: The PA is clamping down on public and press freedoms, but in whose interests? Dr Adnan Abu Amer - Views expressed by writers in this section are their own and do not necessarily reflect Latheefarook.com point-of-view