These days Sri Lankans can witness fuel queues across the country and they seem to be never-ending. Some fuel stations have not received fuel for weeks while some have a supply of fuel daily. Amidst the prevailing fuel crisis several irregularities have been reported. No one talks about them. Those who are connected to such irregularities never came under the spotlight. This is not something that the media is highlighting. These incidents were reported by the Ceylon Petroleum Corporation (CPC) itself. 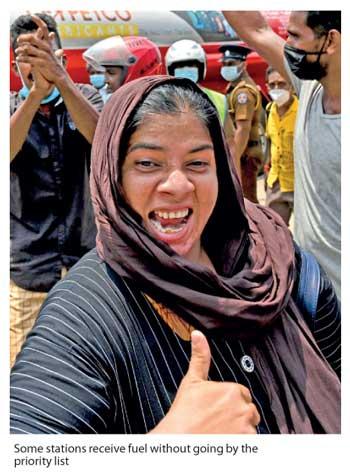 The CPC has around 1300 fuel stations apart from customer service centres. These are in areas where there are factories, garment factories, tea factories and industrial zones. Some generators in these factories require around 3000 litres of diesel to operate for an hour. Some factories own up to four generators. These factories earn dollars and they must receive fuel. If they fail to export their products due to not receiving diesel on time, Sri Lanka may not generate income in dollars. If they fail to dispatch products on time, other countries might grab this opportunity.
The CPC provides such factories with diesel. The 3% commission given to fuel stations is not granted when issuing fuel to factories. The CPC supplies fuel at the retail price and charges an extra amount as transport fees. According to some factory owners the present supply of diesel is influenced by underhand dealings. They have been informed that priority will be given to those who order fuel in dollars. However, they have not obtained diesel yet; despite making orders with the promised mode of payment being US Dollars. Some factory owners place orders for diesel promising payment in rupees. They do not receive diesel for weeks despite making payments and their names being slotted in a list of priority. To include the name in the priority list entrepreneurs have to pay a sum of 50,000 rupees to CPC officers, informed source revealed. They even pay that amount to get their names entered in the list with the hope of exporting their products on time.

The CPC priority list is then sent to the Ceylon Petroleum Storage Terminals Limited (CPSTL) in Kolonnawa or Muthurajawela. In most of the factories fuel is stored in tanks above the ground. These tanks are filled with bowsers which can pump fuel upwards. There are few such bowsers. Factories do not receive fuel despite placing their orders via a priority list. Some officers have informed factory owners that these delays are caused by the unavailability of special bowsers. Another underhand payment is given to some officers of the fuel transport division. Factory owners pay 10000-15000 rupees to receive priority again. This sum is usually accompanied by a bottle of whiskey. And all that is only for one load of diesel comprising 6600 litres.

A CPC source said that there is much corruption involved in the supply of fuel. “Some fuel stations do not receive a single load of fuel despite making orders. Some receive fuel even without making orders. With this, fuel queues will never see an end,” the source added.

The CPSTL is in charge of distributing CPC fuel and the CPC pays a commission for this service. The two institutions have made a priority list to distribute fuel. According to the source the CPSTL is issuing fuel to customers not in the priority list. Earlier 5000 rupees was charged for one load of fuel. Now that amount has increased to a figure between10000-15000 rupees, according to the source. In addition a bottle of top quality liquor should be given, the source added.

There is the presence of a fuel racket operating in this manner. A petrol station in Gampaha has received 21 loads of super diesel, 45 loads of petrol and two loads of Octane 95 petrol during the last month alone. Before the fuel crisis this fuel station sold only two loads of super diesel and 15 loads of petrol during a month. It did not make any order on June 8. However, according to the CPC source, that station has received a diesel order recently.

Those who order fuel following the normal procedure- without agreeing to these deals- do not receive fuel. A fuel station owner in Homagama said that he would receive fuel someday and added that he would not obtain fuel by paying bribes. He also affirmed that fraudulent activities occur on a large scale in the terminals in Kolonnawa and Muthurajawela. Around 600 bowsers leave the terminals daily and they can collect a large amount of fuel daily even by obtaining a bribe of 10000 rupees for each bowser, according to the source.

Such corruptions only create more and more queues. Those who are involved in this racket lack humanity. If the remaining fuel is distributed fairly across the country based on the priority list, these queues would not exist, the CPC source added. This is a mafia and those who are involved work as a team. Therefore no one is exposed. Even the minister or the chairman cannot control this mafia, according to the source.

A coupling method is used when distributing fuel to fuel stations. A normal bowser can carry 19800 litres. When one fuel station orders a load of 6600 litres, another fuel load is sent to a fuel station in the same area which has not placed any order as an underhand dealing. A fuel station in an area to where a stock of fuel is sent may not receive fuel despite being included in the priority list, the sources said.

Sometimes fuel which should be sent to a station is sent to factories based on underhand deals. No measure has been taken to prevent such deals and instead a CRN is issued claiming that the dispatch was a mistake.
A bowser containing 33000 litres of diesel ordered by a paddy mill in Polonnaruwa arrived at Port City in Colombo instead of reaching Polonnaruwa. Our spokesperson said that no investigation was carried out in this regard. A few people connected to the fuel distribution terminals and the CPC are illegally earning money every day in this manner.

Attempting made to contact the CPC Chairman Uwais Mohamed via his mobile number and the Manager of the Distribution Terminal A. M. Bandara proved futile.

When inquired, Fuel Station Owners’ Association Chairman Kumara Rajapaksa said that owing to the country’s prevailing situation the amount of fuel issued to stations is limited. “As the fuel distribution is limited, CPC divisional managers decide on the stations to issue fuel and the type of fuel. Some stations receive fuel and some do not. We order fuel based on our requirements. Every fuel station owner does that. A CPC app sends a message indicating the amount of fuel dispatched. Currently fuel stations do not have fuel as fuel is sold out as soon as stocks are received. Even if we order fuel, only the stations recommended by divisional managers receive fuel. Some stations do not get petrol or diesel or both. Some stations receive all types of fuel including petrol, diesel and kerosene. We keep stations closed until we receive fuel. Some fuel stations and factories were accused of distributing fuel illegally. However those claims about us not receiving fuel after making orders are false. The fact that the CPC has given fuel to other parties instead of those who ordered is yet to be proven. That was merely a rumour. When we make an order, the CPC is bound to send fuel from the terminals in Kolonnawa and Muthurajawela. However we do not receive fuel as the CPC has restricted the distribution of fuel. If we receive the stocks we order, this issue will be solved,” Rajapaksa added.

When contacted, Minister of Power and Energy Kanchana Wijesekera was attending Parliament. However on June 08, he said at the Parliament that the fuel distribution would return to normal from June 9 on wards. Yet, even on the day of composing this article, we could witness vehicles lined up at fuel stations indicating that the fuel distribution hadn’t returned to normalcy.

Disclaimer: Underhand deals and mafia generate fuel queues - Views expressed by writers in this section are their own and do not necessarily reflect Latheefarook.com point-of-view