“A Rattlesnake, if cornered will become so angry and it will bite itself. That is exactly what the harbouring of hate and resentment against others is — a biting of oneself.
–  E. Stanley Jones

This government is no different from any other that ruled Sri Lanka in the past. They all use the same kind of ruse, 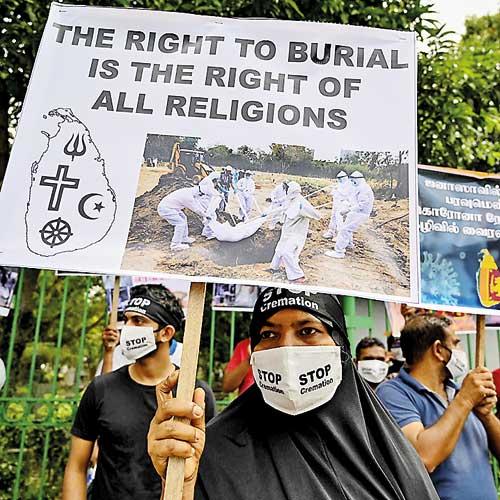 trick, facade, smokescreen and what not, to keep the masses who expected much from them hoodwinked. But there is a stark difference in the type of tactic this government uses to fool the masses, or at least those who form the bulwark of their support, the Sinhala Buddhist voter in the South. They use racism as a continuous, systematic and ongoing tool to whip up anti minority, especially anti-Muslim sentiment among their base. They have reaped rich dividends of it after the Easter Sunday attacks and scored handsomely at the Presidential Elections where the present President came to power in an all Sinhala and mainly Buddhist electoral victory.

Misinformations, disinformation, Deception are sure-fire tools of any ruler who does not have answers to the problems of its subjects. It has been so for ages and it will be so in times to come. Yet one thing is ominously clear; this regime is willing to travel the treacherous and dangerous path of arousing one race against the other, one religion against the other for political mileage.

“One thing is ominously clear; this regime is willing to travel the treacherous and dangerous path of arousing one race against the other, one religion against the other for political mileage”

When the onset of the Corona virus meant that the economic growth was stalled and the government failed to curb the spread, despite giving sweeping powers to the military and short-circuiting the constitutional due process of law, they found the magic word to keep their support base in tact; banning burial of COVID-19 victims. There was little doubt as to against whom the move was intended and who were pleased by it.

In part, it was another sleight of hand to pacify the chauvinist Sinhala Buddhist forces who had been irked to no-end by the appointment of Ali Sabry as Minister of Justice and also, the obvious mollycoddling by the government with some Muslim ministers accused by the Maha Sangha of spreading Islamic fundamentalism. Burial ban was a short term ruse to keep the boat afloat and it did for a short while.

Then came the Damocles’ sword; called the UNHRC resolution, which we had thought was all done and dusted and that with the exit from the UNHRC by the Donald Trump administration, all our troubles of being called to account had disappeared in thin air. But what a rude reality check for the government to know that it was still an active volcano simmering against us. The initial dialogue at the UNHRC this time round focused mainly on the continuous undermining of the rights of the ethnic and religious minorities and even the countries that have supported us, especially, those of the middle east were not coming to our support on the basis of the ban imposed on burial of COVID-19 victims which hurt the religious sentiment of the Muslims, in addition to the Christians, who were forced to cremate their loved ones against their religious beliefs and personal choice.

The visit of the Pakistani PM Imran Khan provided an opportunity to the beleaguered government to woo and muster the support of Muslim contrives and it was done by the promise that burials of Muslims were to be allowed at a separate place. The decision did not simply remove the ban that had been imposed and allow people to bury their dead as a matter of choice; rather it specifically referred to Muslim funerals; again race and religious specific.
The place chosen was Iranaithivu, which is a tiny island off the North West coast has no road access to it and has to be reached by boat. This was an island originally inhabited by Tamil Catholic community that were displaced due to the Civil war that ravaged North and the East for quarter of a century. Those original inhabitants, who were able to finally return to their homes in 2018, even though the Navy still occupies part of the island with only some areas of the coast open to residents for their fishing, activities, will again lose their right to a peaceful living with Covid burials taking place and officials, mainly military, yet again taking control of their lands. The Tamil Catholics, yet another ethnic and religious minority to bear the brunt of the decision, which came out of the unscientific and illogical reasoning that COVID burials can contaminate water ways! And, after forcefully cremating 250 bodies of Muslims.

It was in view of this decision that Sri Lanka made a request to the UNHRC that a certain part of the draft resolution which dealt with forced cremation be deleted as the issue has been solved. It might have pacified the Pakistani PM who will support us at the vote, but very likely, not the entire international community. The government does not know how stark naked it is parading itself in the international arena.

The latest throw of the dice comes with the proposed ban of face covering veils such as the Burqa and the Niqab which will again affect the Muslim community. The quite amusing politician and former veteran Sarath Weerasekera, as the Minister of Public Security says that this was a decision taken by the previous government and not by this government. Yet he maintains that the proposal will be submitted to the cabinet and that the move is purely based on National Security interests and not aimed at any religious minority. Here is the punch line: On the one hand, people are compelled to wear facemasks as it is now illegal to go about without one. But on the other, government seems to be saying that the face mask cannot be in the shape of a burqa or niqab. As to whether the lamented issue of identification for security purpose is served when people are covering their faces with surgical or any other mask is a question that can be answered by some one of brilliant intelligence as Sarath Weerasekera alone.

“Even the countries that have supported us, especially, those of the middle east were not coming to our support on the basis of the ban imposed on burial of COVID-19 victims which hurt the religious sentiment of the Muslims”

International media has already pounced on the news and mixed emotions have been expressed on social media about the ban. At the same time the government is mulling inviting the UN High Commissioner Michelle Bachelet to visit Sri Lanka to assess ‘the situation’ in Sri Lanka with regard to human rights! How Ms. Bachelet would take to the government’s show of their ‘clean record’, we do not know. We certainly hope that she too is made of the same intellectual mettle that Sarath Weerasekera is made of, as otherwise the visit will not be of any advantage to Sri Lanka.

But one thing is clear; the government is playing the racial card all too frequently and without restraint. It might give them some political mileage in the short run. But it is dragging the country in a very treacherous and destructive path, the type of which we have trodden for over 30 years!

Disclaimer: Racism is a very dangerous tool of governance! - Views expressed by writers in this section are their own and do not necessarily reflect Latheefarook.com point-of-view