The battle over 20A appears to be heading for a victory to one person, and that person is neither Gota nor Mahinda but their brother Basil Rajapaksa who, with one leg in Sri Lanka and the other in US, is set to enter the Parliament.

Even though the Supreme Court has virtually given the green light for 20A, with minor changes at the committee stage, trouble is brewing both from inside and outside the Rajapaksa camp.

The apparent split in the Sangha demonstrated by the outspokenness of three prominent prelates against the motion is a healthy development, and it is heartening to see the Catholic Church joining in to make the voice of protest louder. The Tamil community except its native informers has already raised its opposition. Alas, where is the voice from the Muslim community?

After all the agony, suffering and losses incurred by this community in recent times at the hands of elements that are now supporting the current regime, and wanting to strengthen the President’s power through 20A, the silence of Muslim organisations and their leaders is shocking to say the least. The All Ceylon Jamiyyathul Ulama (ACJU), the so-called apex religious body of the community and the nerve centre of Islamic orthodoxy, has so far not spoken a word either in favour of or against this motion. Why?

Is it because ACJU does not want to embarrass the Muslim Minister of Justice, who is among the architects of this amendment? Or, is it to sit on the fence and watch which way the wind is blowing to support the winning side? Or, is it because of its otherworldly outlook and general disinterestedness in mundane matters? Whatever the reason may be, it reflects once again the self-alienating trend that crept into the community at least since 1980s.

This amendment, if goes through the Legislature, will destroy the golden traditions of democracy built over more than 70 years, turn the country into an autocracy of the Stalinist kind, and will throw the nation’s plural polity into chaos. It is the Muslim community that will lose most by this change. 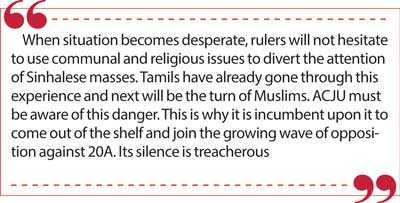 Sri Lanka has a proud record in this region of successfully managing a plural society. It is because of that success Muslims were able to survive and thrive for more than a millennium under Buddhist monarchs.  The community is certainly indebted to that unique tolerance and freedom extended by Buddhist rulers of that golden era.

Today that tolerance and freedom is in danger of being destroyed by a powerful cartel of Buddhist supremacists whose agenda is to homogenise the society and mould it to fit into their own image of Buddhist rule. To achieve that they want an autocratic president with unlimited powers.

Unfortunately, COVID-19 came as an unexpected shock to their machinations. The economic cost of this pandemic is immense. Not only the country is financially bankrupt and people’s livelihood and survival are under threat, but also the territorial sovereignty of the island is in danger of being compromised.  As situation worsens the regime fears that the very people who put them to power at the last election will bring them down at the next.  It is to prevent that happening 20A is proposed.

When situation becomes desperate, rulers will not hesitate to use communal and religious issues to divert the attention of Sinhalese masses. Tamils have already gone through this experience and next will be the turn of Muslims. ACJU must be aware of this danger. This is why it is incumbent upon it to come out of the shelf and join the growing wave of opposition against 20A. Its silence is treacherous.

While ACJU is keeping silent, Muslim intelligentsia is behaving shamelessly cowardly. In a few recently organised public functions to thank the services of the army and to encourage the community to come forward to protect ancient Buddhist heritage, members of the intelligentsia who addressed those gatherings did not have the guts to speak out about how security forces looked the other way when Muslims were attacked by thugs and hooligans and destroyed and burnt down Muslim businesses and properties.

These so-called dignitaries did not have the courage even to mention incidents like what happened in Pottuvil when the President’s Task Force to protect and manage Buddhist ruins arrogantly encroached into lands owned and cultivated by Muslim farmers. Why is this fear to speak out the truth in front of power?

This is a sickness that seems to prevail within the community which debilitates its soul. ACJU’s silence demonstrates that sickness and debility. Muslim leaders must realise that the country has reached a critical cross road. Which way it turns will decide the future of minority communities. Will ACJU wake up, speak out?

“Pity the nation whose people are sheep

And whose shepherds mislead them

Pity the nation whose leaders are liars

Whose sages are silenced

And whose bigots haunt the airwaves

Pity the nation that raises not its voice

Except to praise conquerors

And aims to rule the world

By force and by torture

Who allow their rights to erode

And their freedoms to be washed away

My country tears of thee

(The writer is attached to the School of Business & Governance, Murdoch University, Western Australia.)

Disclaimer: Speak out, ACJU! By Dr. Ameer Ali - Views expressed by writers in this section are their own and do not necessarily reflect Latheefarook.com point-of-view