Delhi has successfully managed the changing dynamics between the great powers, and is now in an even better position to do so thanks to the size of the Indian economy. 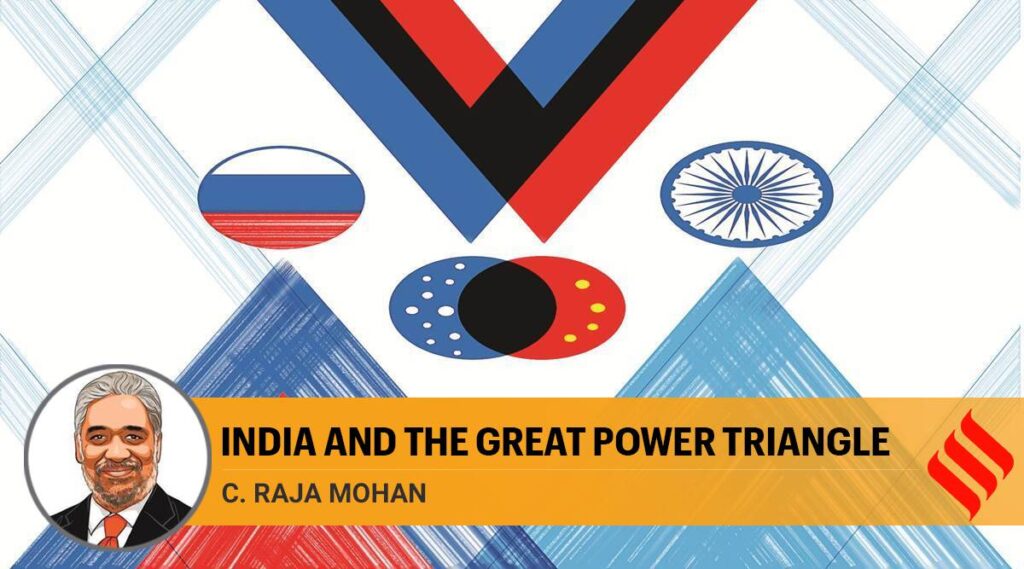 Despite all their venting on India joining an ‘Asian Nato’, China and Russia have not stopped seeking special bilateral relationships of their own with America. (Illustration by C R Sasikumar)

The recent visit of Russian foreign minister Sergei Lavrov to Delhi and Islamabad is among multiple signs of India’s changing relations with the great powers. The others include the dramatic rise of China and Beijing’s new assertiveness. At the same time, Delhi’s growing strategic partnerships with the US and Europe have begun to end India’s prolonged alienation from the West. Meanwhile, New Delhi’s own relative weight in the international system continues to increase and give greater breadth and depth to India’s foreign policy.

Change is the only permanent feature of the world and Delhi has no reason to be sentimental about the past. Consider, for example, the shifts in the triangular relations between Russia, China and America. If you like to pick nits, you could argue with Lavrov’s claim in Delhi last week about relations between Moscow and Beijing being in their best-ever phase today. They were probably even better in the 1950s when Russia and China were ideological soulmates united by expansive economic and security cooperation.

The leaders of the two nations — Joseph Stalin and Mao Zedong — signed a formal treaty of alliance in 1950. Russia not only invested massively in the economic modernisation of China, but also gave it technology that made it easier for Beijing to become a nuclear weapon power.

However, by the 1960s, the two communist states were at each other’s throats, arguing about ideology and a lot else. Dispelling the illusions that communist states don’t fight with each other, the armies of Russia and China fought each other on their frontier in 1969. The Sino-Soviet split had consequences way beyond their bilateral relations. None of them more important than the efforts by both Moscow and Beijing to woo Washington.

The break-up between Russia and China also opened space for Delhi against Beijing after the 1962 war in the Himalayas. As Sino-Russian relations worsened in the 1960s along with the deterioration of India’s relations with China, Delhi and Moscow found common interest in balancing Beijing. That did not last too long though.

Under intense American pressure on Russia in the 1980s, Moscow sought to normalise ties with Beijing. After the collapse of the Soviet Union, Moscow’s first instinct was to become a part of the political West. But disappointed with the Western response, Russia turned to build a stronger partnership with China.

Stepping back to the 1960s and 1970s, China strongly objected to Delhi’s partnership with Moscow (much in the manner that Beijing complains about India’s relations with America today). In a pithy but vulgar summary of Delhi-Moscow ties, Mao Zedong described them as the Russian bear mounting the Indian cow. Although the Indo-Russian strategic liaison endured, it was never without its share of problems that Delhi had to cope with.

Russia, which today resents India’s growing strategic warmth with the US, has its own long history of collaboration with Washington. Moscow and Washington were allies in defeating Hitler’s Germany and in constructing the post-War Yalta system on which the current world order rests. The alliance between Washington and Moscow, however, quickly degenerated into a Cold War by the late 1940s.

But by the turn of the 1960s, Russia was seeking peaceful coexistence with America. Together, Moscow and Washington laid the foundations for nuclear arms control and sought to develop a new framework for shared global leadership.

Delhi was happy to welcome Russia’s repeated veto in the United Nations Security Council against Anglo-American interventions on the Kashmir question. But it was anxious about the dangers of a potential US-Russian global condominium. This is not very different from Delhi’s worries these days about America and China setting up a G-2 over Asia and the world.

Delhi was especially concerned about the Nuclear Nonproliferation Treaty system, with all its constraints on India’s atomic options, that Moscow and Washington constructed in the late 1960s. Many other global and regional issues, including Russian interventions in Hungary, Czechoslovakia and Afghanistan, created political difficulties for India. Delhi never relished Moscow’s ideas on “Asian collective security”. China was even more visceral in its denunciation of the US-Soviet detente in the 1960s and 1970s. But Mao’s answer was not in staying away from both, but in leaning towards America.

Although he fought a costly Korean War with the US in the early 1950s, Mao had no difficulty cosying up to Washington in 1971 to counter the perceived threat from Russia. He was merely following the old Chinese dictum of “aligning with the far to balance the near”. His successor, Deng Xiaoping, refused to extend the 1950 security treaty with Russia that expired in 1980.

Deng turned, instead, towards building a solid economic partnership with the US and the West that helped accelerate China’s rise as a great power. Today, the Chinese economy is nine times larger than that of Russia. If Moscow was the big brother in the 1950s, Beijing is the senior partner today. It is a reminder that power balances will inevitably change over time.

Despite all their venting on India joining an “Asian Nato”, China and Russia have not stopped seeking special bilateral relationships of their own with America. The problem is not about principle, but the difficulty of finding acceptable terms of accommodation with Washington. Delhi has no reason to rule out important changes in the way the US, Russia and China relate to each other in the near and medium-term.

The twists and turns in the triangular dynamic between America, Russia and China noted above should remind us that Moscow and Beijing are not going to be “best friends forever”. Nor will America’s ties with China and Russia remain permanently frozen. Delhi has successfully managed the past flux in the great power politics; it is even better positioned today to deal with potential changes among the great powers, thanks to the size of the Indian economy — it is the sixth-largest in the world — and a more broad-based foreign policy.

In the last few years, India has finally overcome its historic hesitations in partnering with the US. Delhi has also intensified its efforts to woo European powers, especially France. Prime Minister Boris Johnson’s visit to Delhi later this month promises a fresh start in India’s difficult postcolonial ties with Britain. India is also expanding its ties with Asian middle powers like Japan, Korea and Australia.

The current troubles with China seem to be an unfortunate exception to the upswing in India’s bilateral ties with global actors. What about Russia? Despite the current differences over Afghanistan and the Indo-Pacific, Delhi and Moscow have no reason to throw away their mutually beneficial bilateral partnership. To be sure, their relations with third parties like China and America are evolving. But none of that change is impossible for Delhi to manage.

This column first appeared in the print edition on April 13, 2021 under the title ‘India and the great power triangle’. The writer is director, Institute of South Asian Studies, National University of Singapore and a contributing editor on international affairs for The Indian Express

Disclaimer: India and the great power triangle of Russia, China and US by C. Raja Mohan - Views expressed by writers in this section are their own and do not necessarily reflect Latheefarook.com point-of-view