When President George Bush was reelected  on 2 November 2004 , describing it as a tragedy for the entire world, Nobel Peace Prize nominee, Dr. Helen Caldicott expressed her fears  that she wasn’t sure if mankind would survive another four years.

Justifying her fears five days after his re election, Bush bombed and incinerated the Iraqi city of Fallujah, with a population of around 300,000, in November 2004. Using latest of napalm bombs, poisonous gas and banned chemical weapons ,during the Holy Month of Ramadan, Bush roasted the fasting  Muslims who were looking forward to celebrate Eid Al Fitr, which fell on Saturday 13 November 2004.

Their only crime was that they opposed the US occupation of Iraq.

The savagery unleashed was unprecedented. American forces dropped even cluster bombs and used phosphorous weapons that caused severe burns in the military’s most intense urban fighting since the days of Vietnam. Within ten days Fallujah has been laid waste, a hell on earth of shattered bodies and destroyed buildings while the city entered history as the place where US imperialism carried out a crime of immense proportions. The head of Turkey’s Parliamentary Human Rights Committee said this genocide surpassed those of Pharaoh, Hitler and Mussolini.

Bush and his team didn’t want the world to know this well planned and timed   genocide and destruction. So days  before commencing the genocide, they bombed and destroyed hospitals and killed their staff, including doctors and nurses, to prevent body counts as details of body counts, during the previous massacre of Fallujah Muslims in April 2003, were disclosed to the world by doctors, nurses and others in the hospitals. Journalists were completely kept out and even clerics were killed.

Families fleeing Fallujah for protection were blocked by American soldiers who forced them back to their homes. Most of them were later slaughtered, and those who managed to survive were deprived of electricity, water, food and even medical aid, while the injured were left to die.

American soldiers on house to house patrols, kicked opened doors, and grabbed men in the presence of petrified, screaming and starving women and children trapped inside their houses. Most of the abducted were never seen again. 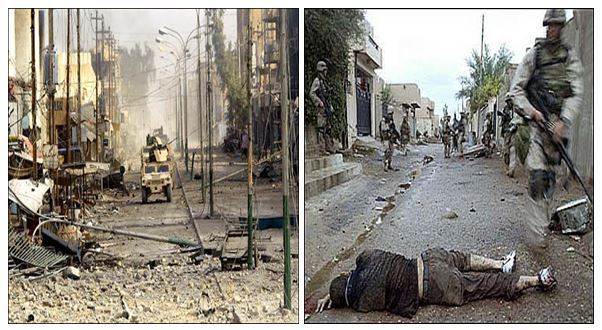 American troops raping Fallujah following a week of bombardment and wholesale destruction of the city in November 2004 .Courtesy Patrick Baz

An eyewitness account stated that US forces used artillery barrages, air strikes with 2,000-pound bombs and air-to-surface missiles together with volleys of tank fire. Homes, apartment buildings and nearly half of the city’s 120 mosques have been destroyed or severely damaged. Human corpses, bloated and rotting, littering the streets where they fell were gnawed at by starving dogs while parents were forced to watch their wounded children die and then bury their bodies in their gardens. They not only shot women and old men in the streets but also shot anyone who tried to retrieve their bodies. ”.

The world will never know the exact number of civilians slaughtered by Bush’s forces.

Recalling the many US atrocities, one Iraqi who escaped from the carnage said he watched US soldiers roll over wounded people in the street with tanks so many times, and they often used tanks to pull bodies to the soccer stadium to be buried. There were dead bodies on the ground and nobody could bury them because of American snipers. They dropped some of the bodies into the Euphrates River. People who attempted to swim across the Euphrates to escape the siege were shot by American soldiers from the shore and these included civilians, including an elderly woman, who were holding white flags or white clothes over their heads to indicate they were not fighters. US troops machine-gunned an entire family of five to death when they tried to escape the fighting by swimming across the Euphrates River .They even killed the wounded. In another incident, resembling the Zionist crimes in Palestine, American troops asked people to come to a mosque if they wanted to leave Fallujah, and all those went there carrying white flags were killed.”

All over Fallujah, there were bullet-ridden mosques with blood-stained carpets inside, where unarmed worshippers had been shot dead by US soldiers.

Summing up George Bush’s savagery, a Western reporter observed as follows: “some districts reeked from the sickening odour of rotting flesh, a stench too powerful to be swept away by a brisk breeze coming in from the sandy plain surrounding the city forty miles west of Baghdad. A week of ground combat by US and Iraqi surrogates, supported by tanks and attack helicopters, added to the destruction in a city where the homes and businesses for about 300,000 people are packed into an area, a little less than two miles wide and a little more than two miles long…cats and dogs scamper along streets littered with bricks, broken glass, toppled light poles, downed power lines, twisted traffic barriers and spent cartridges. Walls are full of bullet holes. US troops have blown holes in walls and knocked down doors to search homes and shops. Dead Iraqis still lay out in the open’.

According to reports North Carolina based mercenary firm Blackwater, sworn enemy of   Muslims, was employed to commit Fallujah massacre. The irony is this very same Blackwater, seven years later today, is trained by Abu Dhabi at a cost of around $ 600 million to protect the city.

Oppressive dictators in the region, installed in power by their Western masters, shamelessly sided with their US   and left the innocent people in Fallujah to face the merciless US war machines.

Aid agencies with lorry loads of food and medicines to help the trapped and injured   were turned away and prevented from entering Fallujah by Americans and their Iraqi surrogates. 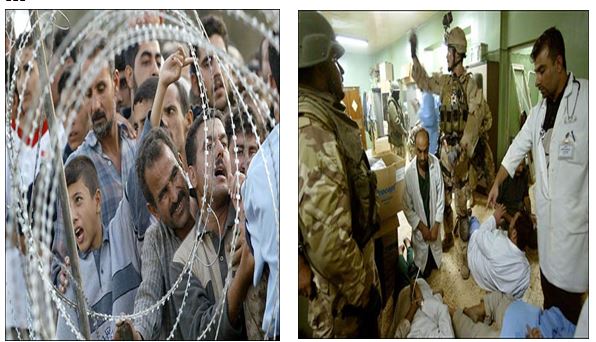 1-Refugees who fled Fallujah before the attack: thousands line up for food outside
military base at Habbaniya, Iraq. (Photo: Shawn Baldwin/New York Times)

2- Doctors at Fallujah General Hospital handcuffed and pushed to the floor when U.S. troops seize the facility-Courtesy New York Times

Where were the champions of the free democratic media, who had for decades prided themselves on protecting and maintaining the freedom of expression? Of course, they were there, but then they were “embedded” in similarity to the ostriches with their heads in the sand. Really, they were pretty well contained as guests of the invading troops in a shameful trend, which served to topple the very defences, which make a democracy effective and vibrant. Here then was the world’s once proudest freethinking media being turned on its head into a circus act of shameful jingoistic journalism.

There has been nothing like the attack on Fallujah since the Nazi invasion and occupation of much of the European continent—the shelling and bombing of Warsaw in September 1939 and the terror bombing of Rotterdam in May 1940. All the talk about precision bombing in Iraq is dust thrown in the public’s eyes.

One report asked ‘what have the people of Fallujah and the rest of Iraq done to deserve such homicidal cruelty? What could conceivably justify the US military killing Iraqis for the “crime” of living in their own country?’ It’s difficult to believe that in this day and age, when people are e-mailing and communicating at the speed of light, a whole city was destroyed and genocide is being committed – and the whole world is aware and silent. The Fallujah offensive virtually disappeared from the news cycle within weeks. But history – if written by Iraqis – may well enshrine it as the new Guernica. The US military has no idea how many Iraqis—combatants and non-combatants—have been killed by the thousands of tons of explosives and bullets it has unleashed on the city.

George Bush is still around enjoying his life. Where is international justice?

Regimes in the region, western puppets, sided with US. - Views expressed by writers in this section are their own and do not necessarily reflect Latheefarook.com point-of-view