For days, Salah* has not been able to sleep.

The resident of Saudi Arabia‘s port city of Jeddah is anxious about the future after a surprise eviction order was marked on his home with red spray paint a few days ago.

Salah is one of at least a million people in Jeddah, according to local estimates, who have had their lives turned upside down in the last three months amid a large-scale demolition push by the government.

It’s part of a plan to rid the city of “slums” and unplanned settlements ahead of a series of grand redevelopment projects, according to pro-government news outlet Sabq.

At least 10 neighbourhoods have been completely wiped out so far, as work continues in around another 10 areas. The plan targets some 60 districts mostly located in the city’s southern part and is expected to continue for months.

But residents say the demolitions have taken them by surprise and given them little to no room to plan their relocation or say goodbye to the neighbourhoods they’ve lived in for generations.

To make matters worse, residents say the authorities have not put them in temporary government housing or offered any compensation, effectively turning many from homeowners to renters.

‘There are children who need to go to school. There are elders, widows and people with disabilities. I saw women crying on the street’

The displacement has caused a housing crisis, with rental prices skyrocketing across the city. In some cases, rents have doubled in a matter of days, residents say, and many aren’t able to afford them.

Some people have been forced to lay out their furniture in the open, taking shelter under bridges, according to eyewitness accounts. One resident said some families are sleeping in their cars.

“There are Saudi families who have no money. They can’t even afford to move their furniture,” a Jeddah resident said in a recording heard by MEE.

“There are children who need to go to school. There are elders, widows and people with disabilities. I saw women crying on the street.”

Online footage and satellite images showed the widescale destruction of entire neighbourhoods, which have been turned into dust.

In Ghulail, one of the first areas to be wiped out, before-and-after satellite images show the entire historic and popular area in ruins.

Drone footage shows vast areas filled with nothing but rubble. Residents compared the scenes to a war zone.

“The removal of entire neighbourhoods has been done in a way I can’t describe. The number of people who have been displaced is unbelievable.”

Since late October, residents of south Jeddah have been surprised by the sudden and unusal scrawling of the word “eviction” on the walls of their homes and businesses.

The marking made by municipality employees serves as an eviction notice for Saudis living in areas marked for demolition.

With little time to leave, in some cases as short as 24 hours, residents have been left scrambling to move their belongings and find a new place to live. Once the eviction deadline passes, electricity and water services are cut off.

Residential buildings, schools, mosques and privately sponsored housing for the elderly and those in need have all been swept up in the demolitions.

Many Saudis have taken to social media in recent weeks, posting emotional farewells to their local mosques, alleyways and markets. 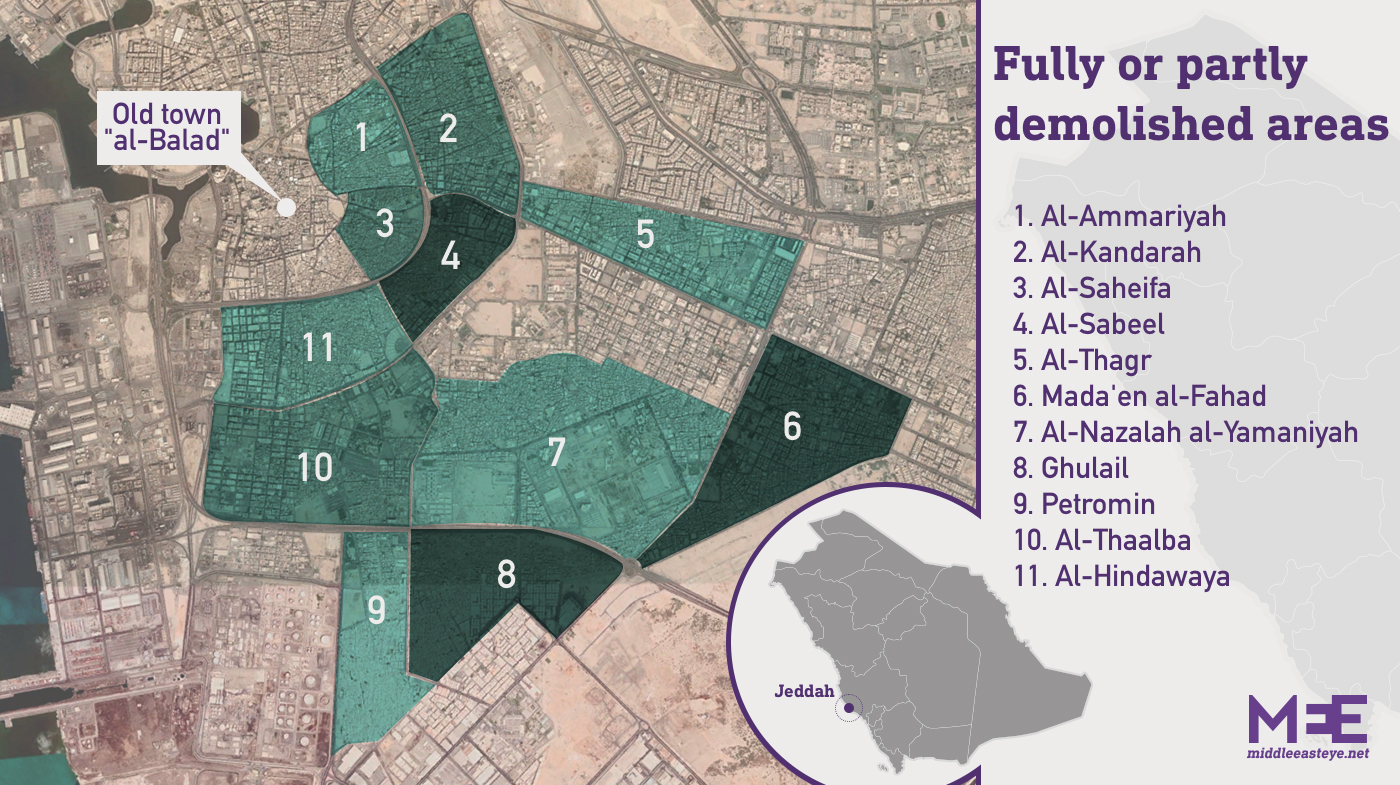 The Saudi-owned Al Arabiya channel reported earlier this week that the government gave residents a month’s notice to evacuate and has set up a compensation scheme for those who can prove ownership of the houses.

But residents said in recordings heard by MEE that the rules are not clear and no assessment of property values and measurements were taken when the bulldozers arrived to raze the homes.

Many have also rejected the neighbourhoods’ characterisations in some local media, which has derided the districts as unplanned old slums. Some have noted that newly built areas are also affected.

“The talk about slums and unlicensed buildings is all false,” one Jeddah resident said.

“There are new buildings built a year or two ago [that have been demolished]. Five or six-storey buildings.”

Jeddah, the second-largest city in Saudi Arabia, is home to 4.5 million people. It is an important economic hub and the gateway to millions of people who visit the city annually on their way to perform pilgrimage in Mecca.

The areas that have been demolished so far are located in south Jeddah, an area viewed by many as the heart and soul of the Red Sea city.

Often left behind by development projects as the city expanded north over the years, south Jeddah was a vibrant social centre made up of mixed ethnic groups who settled there decades ago.

Linked to the antique old town in the city’s centre, known as al-Balad, south Jeddah has been in government development plans for years.

Proposals to remove “slums” were introduced as early as 2007, but did not go through for many reasons, including government reluctance to agitate the local population. But the current Saudi government, pursuing its sweeping Vision 2030 economic plan, now has Jeddah’s southern districts firmly in its sights.

A 2019 report titled “Jeddah: City Profile” was drafted by the Ministry of Municipal and Rural Affairs and UN-Habitat as part of Vision 2030. It provides an analysis of the city’s urban planning and suggests recommendations for future development.

The recommendations include the introduction of a metro system running through south Jeddah. It is unclear whether those development projects are linked to the ongoing demolitions. 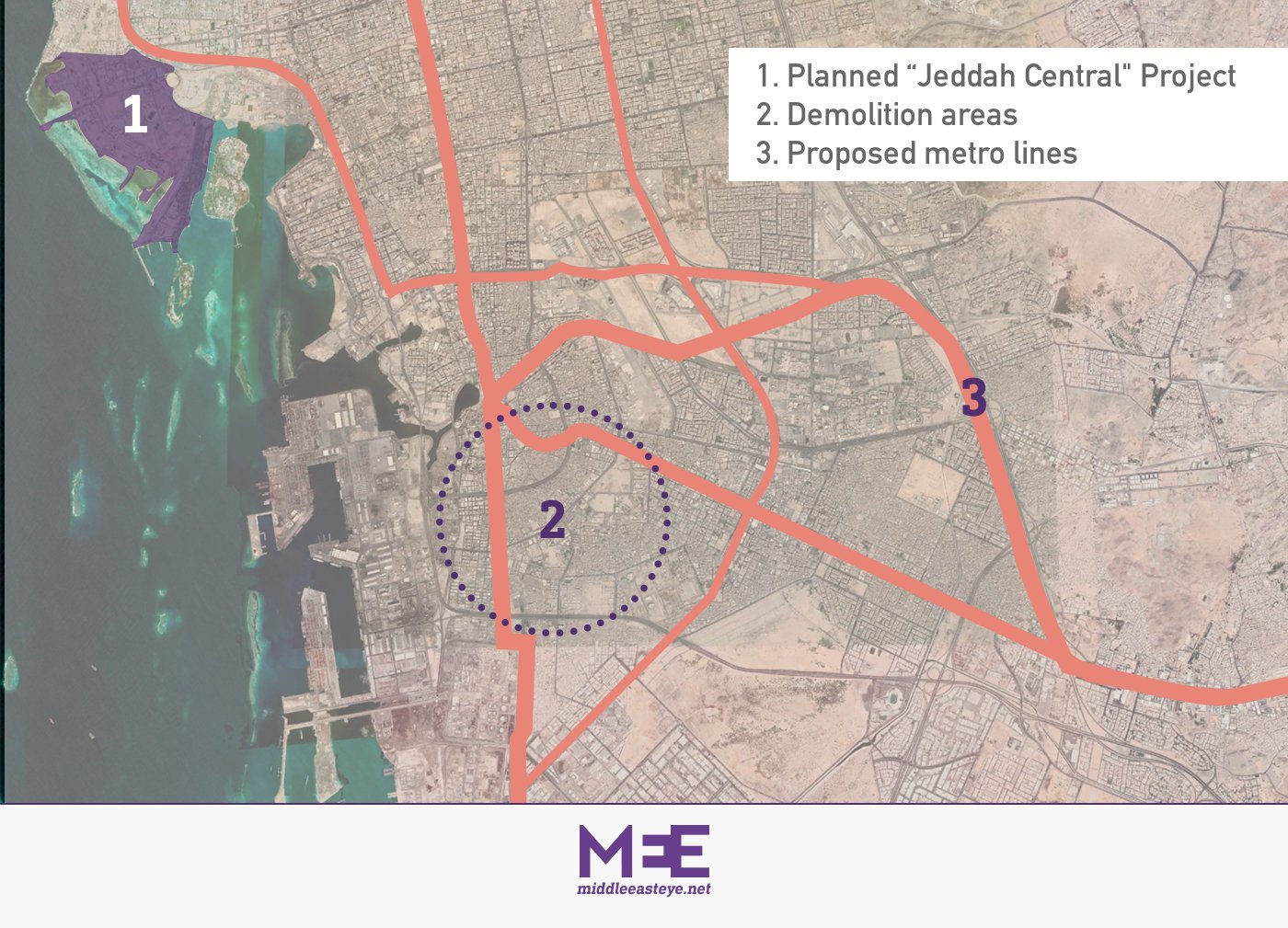 The project, which will cost around $20bn and be built in the “heart of Jeddah”, will include an opera house, a museum, a sports stadium and an aquarium. A “world-class marina and stunning beach resorts” will also be built, along with 17,000 residential units and hotels that offer more than 2,700 rooms.

When asked about development projects to transform the city, residents said they would love nothing more. But the manner in which demolitions have been carried out in the last three months does not justify it.

“We are not against development,” one resident said. “People here want Saudi to become the best place in the world. We support these projects. But you can’t remove people in this manner.”

In 2020, similar demolitions carried out in the northern Tabuk province made international headlines, after Abdul-Rahim al-Howeiti, a Saudi tribal activist protesting his eviction, was shot dead by security forces.

In videos he posted online before his death, Howeiti decried his eviction to make way for the construction of Neom, a futuristic megacity. 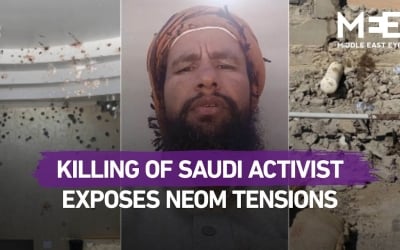 The activist refused to leave his home, which lay in an area said to have been occupied by the Howeitat tribe for hundreds of years, when the incident took place.

Saudi authorities said at the time that Howeiti refused to surrender to security forces and had opened fire, losing his life in a subsequent gunfight.

The Neom project, which will cost billions of dollars, is due for completion in 2025 on Tabuk’s Red Sea coast.

The city, designed to attract international investors, has been subject to scrutiny since it was announced in 2017, with critics calling it wasteful and ineffective in addressing the problems of the Saudi economy, including unemployment and dependence on oil.

Details of the project prompted a flurry of sarcastic and confused reactions on social media when it was first announced, as people accused Mohammed bin Salman of using extravagant technology to cover up the kingdom’s human rights abuses.

*Name has been changed for safety reasons

Disclaimer: 'Unfathomable' Jeddah demolitions uproot hundreds of thousands - Views expressed by writers in this section are their own and do not necessarily reflect Latheefarook.com point-of-view