Skip to content
PALESTINE
Spread the love
Jamla al-Rabeai, 59, one of 2,500 Palestinians in Masafer Yatta facing imminent expulsion, on 19 June 2022 (MEE/Shatha Hammad)
As 2,500 West Bank residents face expulsion by Israel, MEE meets the women who live with unimaginable anxiety over the safety of their children
By Shatha Hammad  in  Masafer Yatta, occupied Palestine

In the small kitchen of her home, threatened with demolition at any moment, Laila Mones was cooking rice and lamb-stuffed zucchini in yoghurt sauce, the smell of the traditional Palestinian dish filling the place.

Meanwhile, her children gathered in the living area, preparing to eat lunch.

As Mones stirred the yoghurt on the stove, all that was racing through her mind was the fate of her and her family, for Israel has started to implement its decision to demolish 12 Palestinian villages in Masafer Yatta, south of Hebron, where some 2,500 residents live, in order to turn the area into a military training zone.

The Israeli army had previously demolished part of her family home in the village of Janba. But the expulsions faced by Masafer Yatta today are not aimed at demolishing one house here or there, but rather to uproot all the residents of the area. Women will be among the worst-affected by the mass expulsions. Firstly, they are already a marginalised group, lacking basic needs in the community such as women-only clinics and training centres.

Secondly, they bear responsibility for their families, a task that is increasingly difficult and complicated under the harsh conditions in Masafer Yatta, and especially in Janba, where the Israeli occupation prevents the building of infrastructure or the paving of streets. As a result, residents are kept living in primitive conditions.

Mones, 44, shared with Middle East Eye the details of her daily life, as a mother and as a woman

“As women, our life here is hard,” she said. “We start our days very early by milking the sheep, then make bread on the fire. After that, we make breakfast for the children before they head to school, and during the day there are many duties we have to carry out.”

“The main goal of educating our children is to reinforce our presence here and develop our village, Janba. It’s not easy, but we are working on achieving it.”

These mothers’ concerns over their children start from the very first moments of their life. Mones, who constantly worries about her children, gave birth to her first child, Younis, while being transported by tractor.

“Younis survived, miraculously, and I experienced the same suffering with each birth due to the difficulty of reaching the hospital and the presence of Israeli barriers that obsruct our movement,” she said.

“I bled many times and lost a lot of blood. I almost lost my life, which would have left my children without a mother.”

These days, an additional concern preoccupies Mones. Janba school, like the village’s housing, is threatened with demolition, a threat that hangs over all schools in Masafer Yatta even though they were established with the support and funding of the European Union.

“I’m worried about the fate of the children and their future,” said Mones. “Where will they study if the schools are destroyed, and how will they achieve their dreams?”

‘I live with great anxiety. I feel that my throat is dry from the intensity of the fear we live in’

This great fear of displacement hanging over the people of Masafer Yatta only intensifies the feelings of anxiety and tension for the women of Janba.

“I live with great anxiety. I feel that my throat is dry from the intensity of the fear we live in,” Mones said. “We wait for the end of each day in order to feel that it has passed without us being displaced, and we prepare for a new day.”

All the women in Janba feel this insecurity acutely. Two sisters, Fatima al-Jabareen, 58, and Halima al-Jabareen, 52, talked to MEE as they prepared lunch for when their children returned from herding sheep.

“We mainly depend on grazing sheep, but the [Israeli] settlements and the army have come to surround us and prevent us from grazing freely,” said Halima. “Our children are constantly attacked by settlers and the army… which keeps us worried about them until they return.”

‘Danger all the time’

Fatima said that persecution by the Israeli army extended into Janba and into the homes of the residents.

“The settlers launch attacks on it [Janba], and the army constantly breaks into our homes and conducts military exercises between them… which puts residents in danger all the time,” Fatima told MEE.

Even at night, the women of Janba live in a state of anxiety due to danger from a quite different direction.

One recent night, Halima and Fatima, who live in adjacent houses, saw a rattlesnake nearby, considered one of the most venomous snakes in Palestine.

“I used to hear it whenever it moved. I could not sleep for fear it might bite one of my children. I stayed up late and checked on them all the time,” Fatima said.

Halima said that after the birth of her daughter, her only child, she would rarely leave her, and that she was constantly worried about snakes and scorpions.

“One time I found a dead scorpion near my daughter. I panicked. What if it had stung her?” said Halima. “She is my only child, and I am terrified of losing her.”

Fatima and Halima’s preoccupations with their children’s safety have led to them neglect their own health problems that have arisen as a result of their difficult living conditions.

Both mothers suffer from breathing problems due to the dusty weather in Masafer Yatta, and Halima suffers from diabetes and high blood pressure.

“Women here may die before reaching the hospital. I sometimes suffer from high fluid levels in the lungs, and my life becomes in great danger,” said Halima. 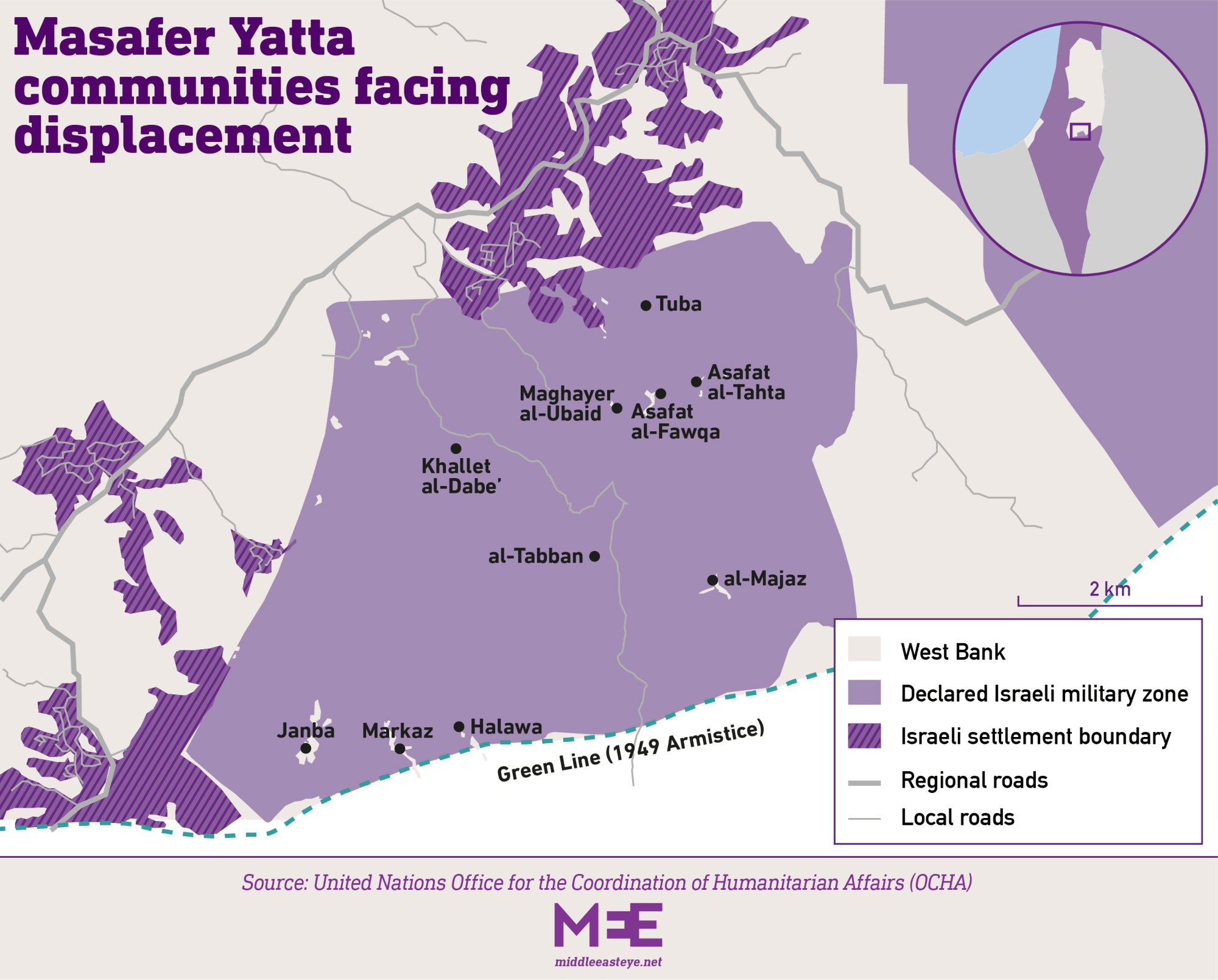 In June, Halima and Fatima lost their mother, Latifa Mahmoud al-Jabareen, who was 95 years old. She died at the public hospital in Yatta, and neither Halima nor Fatima were able to be with her in her last moments.

With the pain of their loss still all too present, they nevertheless must confront the continuing fragility of their own and their families’ existence.

“There is a real threat of our homes being demolished and of our displacement from Janba and Masafer Yatta forever,” said Halima. “We will not accept that, and we will never leave our homes even if they demolish them on top of our heads.”

– Halima al-Jabareen, Janba, mother of one

Her mother was one of the most prominent members of Janba. She was the only midwife who helped the women there give birth, rescued them when necessary and saved their children. With her death, Janba lost one of its most important women.

Fatima cried as she talked about her late mother.

“We learned steadfastness from our mother, who was one of the most powerful women and on whom the village depended greatly. Today, it is not just us who lost a mother – it is the whole village.”

Since her death, the women of Janba have had to move to the homes of their families and friends in Yatta when their due date approached, so that they can be near a hospital to save their own lives and the lives of their offspring. They return a few days later with their children.

‘We were created here’

But premature birth, miscarriage, or any sudden health problems remain a threat to women during pregnancy, and the women of Janba know they are completely alone and isolated. They experience conditions that many women in the world could not endure.

Their only motive for their perseverance in Masafer Yatta is their loyalty to the land and existence, and the rejection of erasure and displacement.

Most women elsewhere in Masafer Yatta live in similar difficult conditions, with lives further complicated by the Israeli occupation.

‘My head is exploding with pain. I can’t take it any more’

In one home in the village of al-Tuwani, 59-year-old Jamla al-Rabeai was standing around, her head tied with a piece of cloth. She quickly untied it when she saw us.

“My head is exploding with pain. I can’t take it any more,” she said.

Rabeai is a mother of six. Two of her sons, Bilal and Mohammad, have been detained in Israeli prisons for nearly a year after having been accused of assaulting settlers.

“The settlers attacked us, and my sons went out to defend us, but the army arrested them and accused them of assaulting the settlers,” Rabeai told MEE.

After the settlers attacked the family, the Israeli army demolished a house under construction in which Mohammad was planning to live with his family.

‘No alternative for us’

However, the family has managed to rebuild the house so that Mohammad will have a home to live in after he is released from prison. 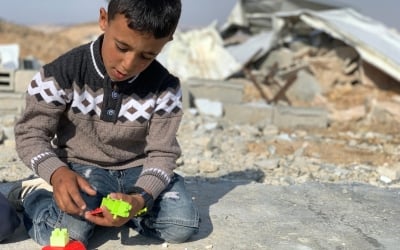 “We build and live on our land, and there is no other alternative for us,” said Rabeai. “Even if they demolish the house again, we will rebuild it, and we will persevere here.”

Rabeai looks after 10 of her grandchildren in the absence of their fathers, currently in the occupation’s prisons. She also takes care of two of her sons who have mental disabilities.

“I don’t sleep at night worrying about my children and grandchildren, for fear of the army’s incursions and the settlers’ attacks,” said Rabeai.

“The children wake up from nightmares terrified because of the repeated panic attacks they had during the [army] raids.

“Day and night, I fear for my children and grandchildren. My heart never rests.”

Disclaimer: The Palestinian mothers of Masafer Yatta and the fear of displacement - Views expressed by writers in this section are their own and do not necessarily reflect Latheefarook.com point-of-view