ECONOMYNEXT – The head of Sri Lanka’s Catholic church, Malcolm Cardinal Ranjith, is courting controversy again, this time claiming that President Gotabaya Rajapaksa had told him that he could not implement certain “unpopular” recommendations made by a presidential commission of inquiry (PCoI) on the 2019 Easter bombings.

“… two days after the [PCoI] report was handed over, [the president] called me, and he asked me ‘how I cannot do all this, because there are some provisions in the report that if I implement, I will become unpopular’ (sp),” the cardinal claimed.

“The government has not implemented most of the recommendations of this report. The report has been a waste of time and a waste of hope to all of us,” he said, calling for international assistance in uncovering the truth.

The recommendations made by the PCoI included criminal proceedings to be instituted against former President Maithripala Sirisena and others. The report also identified a number of Islamist groups accused of causing or supporting “racial and religious disturbances” and the Sinhalese Buddhist organisation known as the Bodu Bala Sena (BBS) which the report said had “contributed to the events”.

The Catholic leader was speaking at a Zoom conference last Saturday (16) with the Sri Lankan expatriate community living in Australia. At least two mainstream Sri Lankan television networks aired a recorded segment of the call in their primetime news bulletin on Sunday. 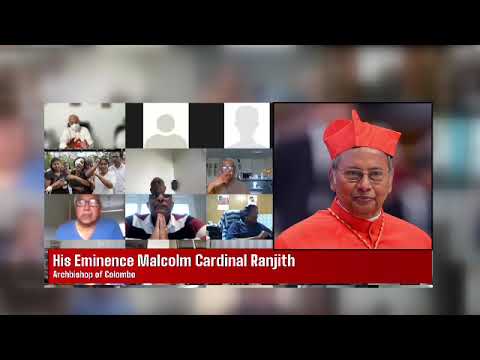 The cardinal said that, in the run-up to the November 2019 presidential polls, Rajapaksa assured the public that the Easter attack – which had killed 269 people and injured over 500 – would be probed as soon as he came to power.

“At a meeting held immediately after his victory with the Bishops conference and with me, he assured us and promised us that he will carry on with the decisions of the commission and he will implement all its decisions.

“But what happened was, when he received the copies of the report he immediately picked a group of ministers of his own government which was a political decision, which was not an independent decision, to pick and choose whatever has to be implemented in order to protect his interests and whatever should be not implemented in order to also protect his interests (sp),” claimed Ranjith.

The archbishop has repeatedly expressed his frustration over what he has claimed is lack of progress in finding the masterminds of the attack, which he has implied on several occasions was the result of a “grand conspiracy” – a claim originally attributed to former Attorney General Dappula de Livera.

The Easter bombings were carried out by a small band of suspected Islamist terrorists, though opposition parties in Sri Lanka, some members of the Catholic community and others have expressed scepticism over the official narrative.

In August this year, Ranjith also questioned claims that the terrorists had been backed by the Islamic State of Iraq and Syria (ISIS).

In July, Ranjith said he was sceptical of what he called a politically compromised law enforcement’s ability to probe the “grand conspiracy” behind the bombings.

Speaking on Saturday’s Zoom call, the archbishop said, quoting the report, that the PCoI had recommended that the Attorney General request intelligence agencies to “inquire into a whole series of suspicious grey areas”.

“But nothing has been done because we know from inside that it is only words that they mentioned. It is only a camouflage. The people who were expecting justice and to know the truth behind these attacks have been let down very badly by the present government and the present leadership (sp),” he said.

“We’re absolutely shocked and horrified about this attitude,” he added.

Twenty-two volumes of the PCoI report, purportedly containing sensitive information, were submitted to the Attorney General on March 12, this year, over a month after the ‘final’ PCoI report was handed over to the president.

The PCoI recommended that criminal proceedings be instituted against former President Maithripala Sirisena and others over the incident.

The government has been claiming for some months now that Maulavi (Islamic preacher) Mohamed Ibrahim Mohamed Naufer and one Rasheed Hajjul Akbar, both of whom are in custody, had been identified as the only confirmed masterminds of the attack. Public Security Minister Rear Admiral Sarath Weerasekara told reporters in May that no other suspect had been identified as having masterminded the attacks and stressed that the government has no intention to hide its findings.

The cardinal also spoke of his efforts to prevent further bloodshed in the wake of the bombings.

“We don’t want to take revenge from anybody. We’re not out for other people’s blood. When the incidents happened, there was a serious possibility of riots in Sri Lanka. We did everything possible – the church – to prevent this. We made repeated appeals along with Ven Itthapane Dhammalankara thero.

“I repeatedly asked my people not to attack the Muslims. I protected the Muslims because we knew this attack could not have been done by seven or eight extremist Muslims. There was something big behind,” he said.

“We want to know what is this big thing that happened behind this attack. Until we know that, we will not be satisfied (sp),” he added.

The archbishop then repeated a previous call for international assistance.

“We want the international community to back us in this struggle to find out what really happened under Easter Sunday, who really did it, who made use of those characters in order to achieve political aims. We want to know that (sp),” he said.

Disclaimer: Sri Lanka Easter attack probe: Prez said he couldn’t implement some recommendations, claims cardinal - Views expressed by writers in this section are their own and do not necessarily reflect Latheefarook.com point-of-view