Similar issue in the Indian state of Karnataka, triggered by Hindutva fascists in cooperation with school administrations, has been tearing society apartsince December.The issue is now being discussed in the Indian parliament.

Here at the Trinco Hindu Ladies College the principal Lingeswari refused to allow the teacher to resume work,despite court order and instruction from the education ministry.Fahmida teacher did not go half naked or in bikini, but was wearing hijab, one of the most decent dresses for women in the world.

However the principal obstructedFahmida from  resuming her duties,  brought in outsiders to frighten the teacher,  illegally allowed outsiders within the school premises,her neck was  squeezed ,perhaps,  threatening to kill, instigated teachers and students  against  the Muslim teacher,  brought students to the street illegally and in violation of covid regulations,madefalse accusations  to enter the hospital, subjected teacher  Fahmida’s fundamental rights toquestion and deniedher religious rights enshrined in the constitution.

Added to these lawlessness was  the principal’s addressduring which she said  that this Hindu College isfor Tamils and othercultures have no place, exposing her racist mindset, arrogance and lawlessness .

The irony is that Fahmida was sent out of the hospital even before she recovered whilethe Principal Lingeswari remained in the hospital without any health issues. Hindu group including teachers ,perhaps instigated by the principal, protesting against Muslim teacher.

Condemning this as a clear racist actJustice Minister Ali Sabriasked how can theprincipal prevent Fahmaida from wearing Abaya while the court and even human rights group have allowed though face covering need to be avoided in view of the security issue.

In an apparent reference to education ministry officials’collaboration with Principal Lingeswari, Trincomalee MP Imran Mahroof said education authorities should try to sort out issues arising between communities instead of aggravating them.In this case it is rather disappointing to see the attitude of higher education authorities.

Many fair minded Tamils condemned the treatment meted out to Fahmida teacher. This is a government school where everyone could teach.

For example Zahira College in Colombo, has been a Muslim School which produced some of the highly respected Tamil professionals, intellectuals, journalists and even politicians.Thisis a shining examplefor communal harmony and Trinco Hindu College.

Now the question is whether the principal Lingeswari acted alone or there was a force behind her.

A top-level delegation led by Mr. Ravi Shankar Prasad, a senior BJP leader, accompanied by RSS and Shiv Sena members had discussions with the Rajapaksa brothers. According to reports the visit took place without diplomatic protocols or arrangements by New Delhi’s High Commission in Colombo.

The BJP-led delegation’s Colombo visit took place at the initiative of the RSS representative, Ram Madhav, who organised it through a collaboration of New Delhi-based India Foundation and Colombo-based Bandaranaike Centre for International Studies, news reports said.

In fact in October 2014‘Siva Senai’ opened its branch in Vavuniya. Maravanpulavu Sachithananthan, the chief organizer of ‘Siva Senai’, said that they had the support of Shiv Sena, BJP, VHP, and RSS. Mumbai’s Shiva Sena leader Sanjay Raut told that his party extends support to the new Lankan outfit.

In an article in Colombo Telegraph columnist Lakmal Harischandra said ”It is not rocket science to realize that the underlying plans of this Hindu fundamentalist outfit is to create further dissensions among the Muslim and Tamil Hindu communities .

Meanwhile, across the shores in India, preventing hijab wearing Muslims from entering schools in Karnataka has thrown the spotlight on freedom of religionprotected under the Constitutionin India.The row over whether educational institutions can impose a strict dress code that could interfere with rights of students has spilled to other colleges in the state. The issue throws up legal questions on reading the freedom of religion and whether the right to wear a hijab is constitutionally protected. 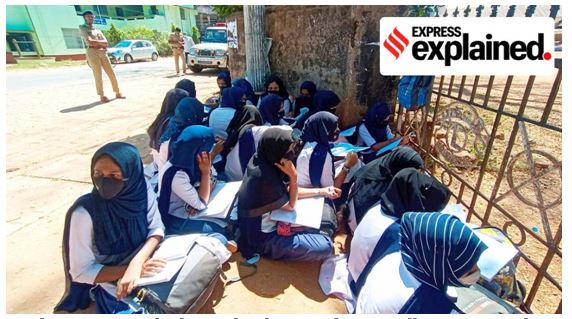 Students sit outside their school in Kundapura village, Karnataka on Friday after the authorities denied them entry for wearing a hijab. (PTI Photo)

Indian Union Muslim League Lok Sabha MPs had given adjournment notice to demand a discussion on the  Hijab row in Karnataka while Congress urged education minister to intervene to ensure the constitutional rights of the students are upheld and matter is resolved.

Lashing out at the government, Congress leader in the legislative council B.K. Hariprasad in Karnataka state said, “BJP is fishing in dangerous waters by meddling in Hijab-Saffron row in Udupi district. It shows their sinister plans to create issues out of nothing for petty political gains. BJP is posing risk to students’ education which is already affected by the pandemic.”

Disclaimer: Has Hindutva Racism Entered Trinco Hindu College? - Views expressed by writers in this section are their own and do not necessarily reflect Latheefarook.com point-of-view