Will the ousted Pakistan Prime Minister Imran Khan return to powerin August 2023 when the next general election is expected?

This is the question now being asked in view of the spontaneous countywide demonstrations in angry response to Pakistan’s National Assembly vote of no confidence on April 10that saw the ouster of the popular former leader Imran Khan. Khan’s supporters and his Pakistan Tehreek-e-Insaaf, PTI, party flooded the streets all over waving the party flag and calling for his reinstatement.

The protests were not limited to Pakistan. Elsewhere in the world, people made their feelings of disbelief and disgust against the removal of Khan. In the Irish capital Dublin, a large crowd gathered in the street, holding Pakistani and PTI flags and rallied against “imported regime change” in Pakistan.

In the US city of Houston in Texas, crowds gathered in the city’s main thoroughfare and chanted “Pakistan Zindabab!” and called for an end to foreign meddling in Pakistan’s political affairs.

Khan accused his ouster was devised by the United States and that Washington had paid off opposition parties as well as their National Assembly members to vote against him. He has alleged that this was part of a US-led conspiracy, targeting him because of his foreign policy decisions including a recent trip to Moscow that angered Western officials. His anti-Western tilt in his foreign policy has included criticism of America’s war in Afghanistan in Pakistan.

“Look out how he has spoken out against Islamophobia,” chimes in Mohammad, a civil servant. “Before we used to be like slaves.”

Meanwhile there were also video clips in circulation accusing Saudi Arabia and Abu Dhabi of their role in this conspiracy. They point out that these two countries had interfered in the internal affairs of Pakistan   in the same way they, together with Kuwait, spent 11 billion dollars to create food and fuel shortage to topple  Mohamed Morsy’s pro Brotherhood movement government in Egypt.

Saudi and Abu Dhabi, hand in glove with US, Europe and Israel dot want the rise of Islam as force. This  is today’s shameful state of affairs.

As stated by Secunder Kermani of BBC Islamabad, it’s unlikely to be the end of his political career. However, whilst, the poor state of the economy has undoubtedly diminished his popularity, Khan looks set to remain a formidable force in the country’s politics.

Twenty seven year old   Ali Malik, a junior accountant who voted for Khan in 2018, but remains supportive of him said” We have to endure this hard time,” he says of the economic situation. “Imran Khan has taken a stance and we should stand with him.”

“I think Imran Khan is the only honest guy left,” Nadia Humaiyun, 34, told the BBC. “He’s the only one we can trust and we do not want to be ruled by these traitors.”

“The rallies have given the message that Khan was still a popular leader,” Zahid Hussein, a political analyst, said in an interview with Al Jazeera.

It’s believed a rift between the army and Imran Khan led to the military withdrawing its support for his slender ruling coalition. This emboldened the opposition. When they began plotting a vote of no confidence, and sounding out potential defectors from within his party and coalition allies the military made clear that they were going to be “neutral”.

Khan’s former Information Minister Chaudhry Fawad Hussain said “Turncoat and sell-outs have started appearing out of fear of action. The last five persons have got Rs 150 to 200 million,” he said  accusing the opposition leaders of setting up “markets of horses and mules”.

The move to oust Khan is led by the main opposition parties, the Pakistan Muslim League – Nawaz (PMLN) and the Pakistan People’s Party (PPP).Both known more for their corruption than against their services to the country.

Khan, who came to power on a platform of anti-corruption and other political reforms in Pakistan, has denounced the opposition as a “gang of thieves” in vitriolic public addresses.

Shehbaz Sharif, the new prime minister, is the younger brother of jailed former Prime Minister Nawaz Sharif, who is himself on bail pending a money laundering trial. Earlier Pakistan’s anti-corruption court  convicted ousted Prime Minister Nawaz Sharif in absentia and sentenced him to 10 years in prison, in what seemed to be the end of a long and tumultuous political career of the three-time leader.

Maryam Nawaz, the daughter of Nawaz Sharif, was also convicted and sentenced to seven years in prison.

Sharif’s government is a coalition made up of seven parties with distinct political interests that were united in opposition to Khan but that in practice do not share a common policy agenda.

Maintaining civilian-military comity will also be a challenge for Sharif. Bajwa’s term as army chief ends in November, and prior to the recent crisis, he had not been shy about his desire to have his tenure extended. One implication of Khan’s removal is that Bajwa will likely be replaced on schedule, which in many ways would be a welcome return to normal. But much can change in the next six months. 16th April 2022 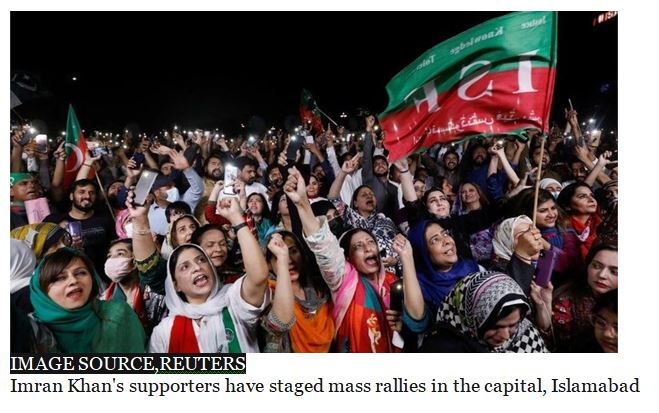 Countrywide spontaneous demonstrations supporting him - Views expressed by writers in this section are their own and do not necessarily reflect Latheefarook.com point-of-view