Since early this month the Bangladesh government started relocating a group of Rohingya refugees to remote flood prone Bashan Char, or floating island, in the Bay of Bengal despite opposition from refugees and international organization raising concern about refugees’ safety.

This island, formed naturally by Himalayan silt in the Bay of Bengal, some 60 kilometers from the mainland , regularly submerge due to monsoon rains .It now has flood protection embankments, houses, hospitals and mosques built at a cost of more than 112 million US dollars by the Bangladesh navy.

Bhasan Char is not sustainable for human habitation and could be seriously affected by rising sea levels and storm surges. It most likely would have very limited access to education and health services, and extremely limited opportunities for livelihoods or self-sufficiency. It would unnecessarily isolate refugees. The Bangladeshi government has made no commitment to allow refugees’ freedom of movement in and out of the island. Moreover, refugees have not consented to move there
The United Nations has also voiced concern that refugees be allowed to make a “free and informed decision” about whether to relocate to the island. Therefore Human Rights Watch, Amnesty International and Fortify Rights have strongly opposed the relocation of the refugees to the island

Around 750,000 Muslims fled their lands and homes in August 2017 when the Myanmar military committed genocide on them. The crackdown included rapes, killings and the torching of thousands of homes, and was termed ethnic cleansing by global rights groups and the UN.

Since Aug. 25, 2017, nearly 24,000 Rohingya Muslims have been killed by Myanmar’s state forces, according to a report by the Ontario International Development Agency (OIDA).

More than 34,000 Rohingya were thrown into fires, over 114,000 beaten, and as many as 18,000 Rohingya women and girls were raped by Myanmar’s army and police, said the OIDA report, titled Forced Migration of Rohingya: The Untold Experience.
Over 115,000 Rohingya homes were burned down and some 113,000 others vandalized, it added 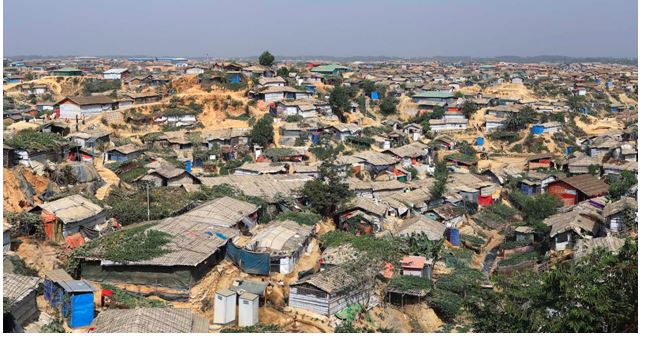 They ended up living in crowded, squalid refugee camps on Bangladesh’s Cox’s Bazar district
The current refugee camps near the town of Cox’s Bazar are overcrowded and unhygienic. Disease and organized crime are rampant .Education is limited and refugees are not allowed to work.
Bangladesh attempted to start sending refugees back to Burma under a bilateral framework last November, but no one was willing to go due to safety concerns.
A UN-sponsored investigation in 2018 recommended the prosecution of Burma’s top military commanders on charges of genocide, war crimes and crimes against humanity for the violence against the Rohingya.

Densely populated Bangladesh has struggled with the growing number of refugees. Local communities have been increasingly hostile toward Rohingya after a second failed bid to send thousands back to Myanmar in August.
Prime Minister Sheikh Hasina’s government has already spent tens of millions of dollars to turn Bhasan Char into a permanent landmass and a temporary home for the refugees. It was unclear if the government planned to repurpose the facilities already built on the island.

“Any decisions relating to the relocation of refugees must be transparent and involve the full participation of the Rohingya people. In the meantime, plans for any further relocations must be abandoned.”

Who are the Rohingyas?
Arakan had been an independent kingdom before it was conquered by the Burmese in 1784. Rohingya historians have written many treatises in which they claim for themselves an indigenous status that is traceable within Arakan State for more than a thousand year’s

It became part of the Province of Burma of British India in 1886, after the annexation of Burma by the British. Arakan became part of the Crown Co lony of British Burma which was split off from British India in 1937. …
Burma gained independence from Great Britain in 1948 and this issue is a problem that Burma has had to grapple with since that time.

According to a report by the Indonesian Journal of southeast Asian Studies ” The Rohingya are considered among the most persecuted, vulnerable, and oppressed minorities in the world. They continue to suffer from several forms of restrictions and human rights violations in Myanmar due to them being denied Myanmar citizenship. They are victims of various forms of oppression, such as arbitrary taxation, land confiscation, destruction of mosques, torture and ill-treatment, extrajudicial executions, restrictions on movements, forced eviction and house destruction, forced laborers on roads and at military camps, and financial restrictions on marriage. Since the 1970s, a number of crackdowns on the Rohingya in Rakhine have forced them to flee to neighboring countries. 16 December 2020

Disclaimer: Rohingya Muslim refugees pushed from pillar to post Bangladesh relocating them to a remote floating island By Latheef Farook - Views expressed by writers in this section are their own and do not necessarily reflect Latheefarook.com point-of-view